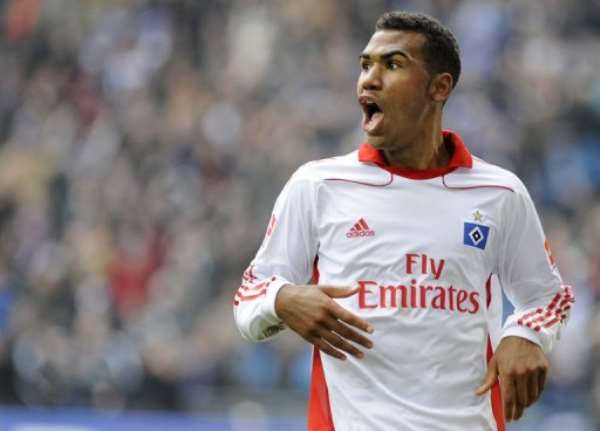 JOHANNESBURG (AFP) - Cameroon edged Democratic Republic of Congo 1-0 Saturday to make a winning start as they seek a record seventh appearance by an African nation at the World Cup.

Germany-based Eric Maxim Choupo-Moting was the match-winner at a packed national stadium in capital Yaounde, converting an early second-half penalty after he had been fouled.

Although eight of the original Congolese squad did not show up, they impressed during the first half only to be denied by several excellent saves from goalkeeper Carlos Kameni.

Cameroon failed to reach the 2012 Africa Cup of Nations in Gabon and Equatorial Guinea after finishing a distant second behind Senegal and striker and four-time African Footballer of the Year Samuel Eto'o is suspended.

Eto'o was accused of being the ringleader when the national team went on a bonus-related strike last year, forcing Cameroon to cancel a lucrative friendly in Algeria.

There has also been unhappiness in the corridors of power with World Cup legend Roger Milla stripped of the honorary presidency of the national football federation after clashes with officials.

Milla disagreed with the ban on Eto'o, the Russia-based star who has been the chief source of Indomitable Lions' World Cup and Cup of Nations goals for many seasons.

Emmanuel Adebayor-inspired Togo and fairy-tale 2012 Cup of Nations qualifiers Libya, who had to fulfil fixtures amid a raging civil war, are the other teams in Group I and meet Sunday in Lome.

Central African Republic celebrated a first World Cup qualifying victory after a goal in each half from Foxi Kethevoama earned a 2-0 Group A win in Bangui against Botswana.

Kethevoama, on loan to Kazakh outfit FC Astana from a Hungarian club, opened the scoring on 18 minutes and struck again early in the second half to give the Wild Beasts an early lead in a pool completed by South Africa and Ethiopia.

Kenya failed to maximise home advantage in Nairobi and had to settle for just one point after a 0-0 stalemate with Malawi in Group F, which Nigeria is favoured to win with Namibia the outsiders.

Chaos during inauguration of Parliament unjustifiable – Bagb...
6 minutes ago

Bagbin declares NPP as Majority with Fomena MP
6 minutes ago