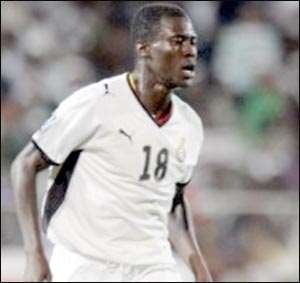 Edmund Owusu Ansah THE RECENT extraordinary exploits of local Black Stars skipper Edmund Owusu-Ansah has caught the eyes of an Israeli club which has shown great desire to lure him to their base.

Harport Tel Aviv has reportedly tabled a mouth-watering US$150,000 offer for the Heart of Lions playmaker.

Owusu-Ansah's splendid performances for the local Black Stars during the maiden Africa Nations Championship (CHAN) in Cote d'Ivoire was said to have ignited the Israeli club's interest in him.

A source who divulged this to DAILY GUIDE SPORTS remarked that officials of Heart of Lions are happy about the offer and might soon open talks with their colleagues at Harport Tel Aviv.

Owusu-Ansah joined Heart of Lions from Kotoko where he was part of the Porcupine Warriors team that lost the maiden Africa Confederation Cup to bitter rivals Accra Hearts of Oak in 2004.

Ho West Tension: Killer Reports Himself To Police
29 minutes ago