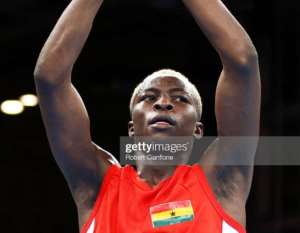 18-year-old Joseph Commey aka Junior Jaguar says he wants to win the 2023 African Games Gold in Accra, Ghana, and Olympic Gold in Paris, France in 2024.

In an exclusive chat, he said what happened in Birmingham 2022 was the work of God Almighty, and he believes he can win more laurels in upcoming international boxing tournaments.

According to him, his most comfortable weight is Lightweight, but he fought in the Featherweight division during the 2022 Commonwealth Games in Birmingham, and he had it tough in weight management but gathered courage and determination to succeed.

Coming from a boxing family, with his granddad and uncles being former Commonwealth and African Champions and his late senior brother also a boxer in the national team, he said it did not difficult to join the sport because that is how they play as a child, and he grew with fighting because at James Town and Bukom what they like most is boxing.

Coach Ebenezer Adjei aka Killer of the Black Panthers boxing gym said his boxers are exceptional because they are very disciplined.

“My boxers are very obedient, that is why they are so good and they can move to places. I thank our manager and promoter, Alex Ntiamoah – Boakye who has been very instrumental and influential in our programs and success story,” he expressed.