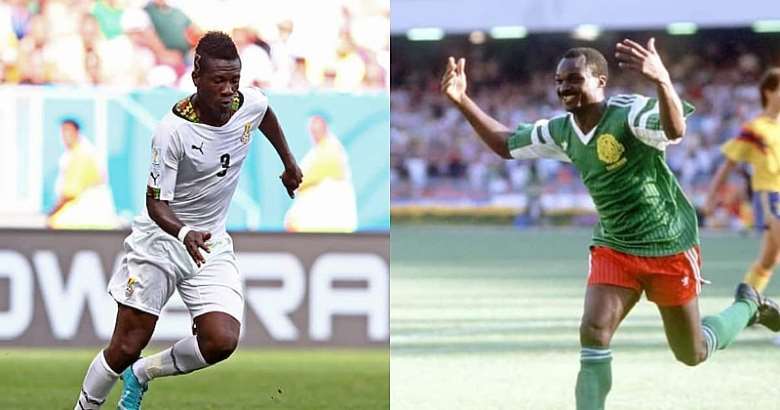 Former Ghana international Mohammed Polo has taken a swipe at Asamoah Gyan, stating that the former Sunderland striker is inactive and should not compare himself to Cameroon legend Roger Milla.

Gyan, who is Ghana’s all-time top scorer, has expressed his desire to play for the Black Stars at the upcoming 2022 FIFA World Cup to be staged in Qatar.

In an interview with the BBC, Gyan admitted he is not fully fit at the moment and is working hard to be in good shape.

But he was quick to indicate that “anything can happen” with regard to him returning to the Black Stars squad for the World Cup because “it has happened before back in 1994 when Roger Milla came back from retirement to play in the World Cup.”

However, the outspoken Polo believes that the situations surrounding Gyan and Milla are not the same.

“We must be serious with our football, this is our fourth time going to the world cup and Ghana wants to make an impact, ” he told Kumasi-based Akoma FM.

“Gyan still has the opportunity though he is aged. Some of his age mates are still playing regularly.

“Is he (Gyan) actively playing now? We know what he can do when he is active, so if he wants to play again for the Black Stars, he should register for a local team just like Sulley and prove his worth. Everything stops with the coach (Otto Addo).

“Roger Milla did the same and played well in the World Cup but the question is ” are the situations the same”?

“We want to make an impact going to the world cup so all needed necessities must be explored but like I said we must be serious with our football.”

Gyan’s last appearance for the country was during the 2019 Africa Cup of Nations game against Tunisia and despite the long absence from the national team, the player is yet to retire from international football.

The 36-year-old’s last competitive season came during the 202/21 Ghana Premier League season where he featured five times for Legon Cities.