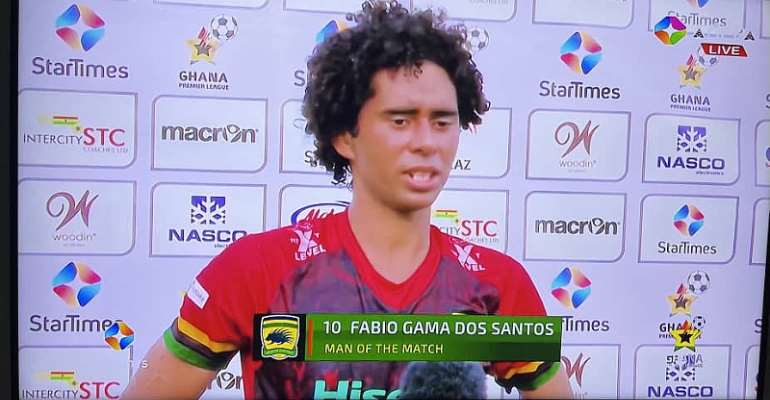 Brazilain forward, Fabio Gama has been named the NASCO Man of the Match after an impressive outing on Wednesday.

Asante Kotoko recorded a 4-0 win over Bechem United in a delayed Ghana Premier League fixture at the Obuasi Len Clay.

Gama scored the second goal of the match on the nick of half time when he smashed in on a half volley inside the box.

It was his second goal for the club -all in league matches- and he dedicated it to his pregnant wife and unborn baby.

His skills and industry saw him register a hockey assist in the fourth goal scored by countryman Michael Vinícius Silva de Morais in the 83rd minute.

Abdul Ganiu, Fabio Gama, Francis Andy Kumi and Michael Vinicius were all on the scoresheet.

Asante Kotoko now sit on the 3rd position on the league log with 31 points.

The Porcupine Warriors will host Berekum Chelsea in the matchday 19 games at the Len Clay Stadium this weekend.