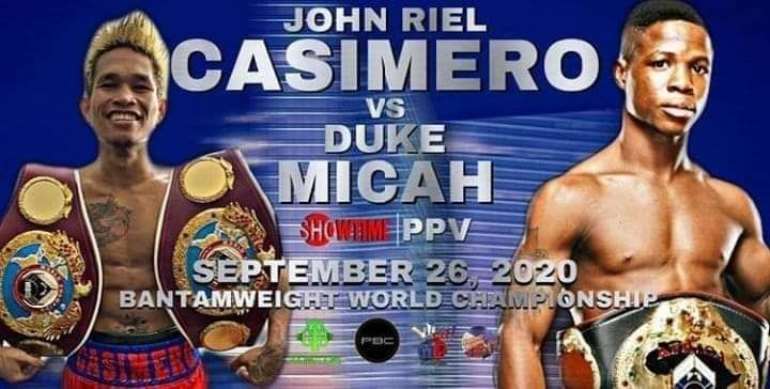 The Friends of Boxing (FOB) in Ghana have wished undefeated challenger to the WBO Bantamweight title success.

They wished the former Olympian, Duke Micah the best and pray that he wins convincingly on all score cards in his bout against John Riel Casimero, a Filipino.

It will be one of five world championship bouts on the night which is headlined by the Charlo twins, Jermall and Jermell, who will be fighting for separate world titles.

The boxing experts say Micah must prevent Casimero from having his tempo in the ring by attacking rather than boxing him around.

“It is going to be tough for Duke but I know he can deliver,” said Carl Lokko, who doubles as the Technical Director of the Ghana Boxing Authority. “He must work extra hard to win the fight because Casimero is very good.

“Duke must prevent him from having his rhythm throughout the fight. He can do that by applying pressure on him rather than boxing around which can be dangerous.

“He must be prepared to go all out by winning at least nine rounds to convince the judges should the fight travel the entire rounds,” he added.

Micah returned to the ring in 2019 after a year’s layoff, occasioned by a promotional tussle with Real Deal Promotions. On his return, he destroyed Luis Suarez Cruz in two rounds on August 31 last year before earning a unanimous decision over Janiel Rivera in December.

The former Black Bombers at the 2012 London Olympic Games who is yet to fight this year due to the COVID-19 pandemic outbreak despite training since the beginning of the year believes he is destined to be a world champion.

Casimero, 31, is also yet to fight this year after his scheduled April unification bout with Japan’s Naoya Inoue was cancelled due to COVID-19.

The Filipino has a thoroughbred advantage over Micah having won world titles at flyweight, super flyweight and bantamweight.

Meanwhile, colleague boxers, the boxing media in Ghana as well as the Ghana Boxing Supporters Union are solidly behind Micah praying and hoping for victory.