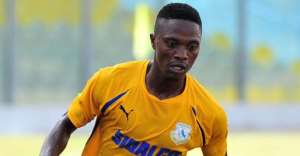 Former Ghana U-20 midfielder, Abraham Asiedu Attobrah has admitted that moving to Belgium to play for KV Kortrijk didn’t help his career.

The Ghanaian international started his professional career with New Edubiase Football Club and played with the side from 2009 to 2015.

He subsequently earned a transfer to Belgium to play for KV Kortrijk in the Belgian Jupiler Pro League with a lot of expectations. An uneventful spell, however, only lasted a season as he returned to his home country to sign for Ashanti Gold.

Opening up on his time in the European country in an interview with Ashaiman TV, Asiedu Attobrah has revealed that that move was a bad one.

“A lot of things happen to us players, it’s all from the decision we make. To me as a player, my move to KV Kortrijk in Belgium didn't help me. I went there as a juvenile footballer, taxation and other issues forced me to leave the country”, the midfielder said.

Abraham Asiedu Attobrah, 25, was part of the Black Stars B team that lifted the WAFU Cup in 2013 and is currently a free agent after ending his stint with Al-Shorta.