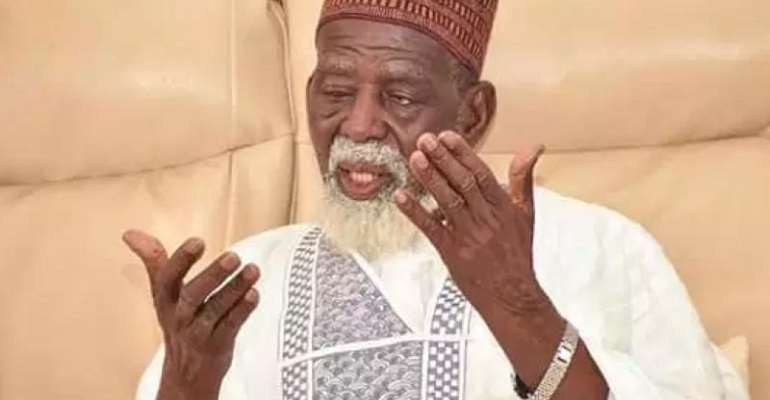 It will be recalled that the Chief Imam joined a mass service at the Christ the King Catholic Church in Accra to mark his 100th birthday anniversary last year.

The move was a great effort towards building religious tolerance and co-existence in the country.

On their Facebook walls, both President Akufo-Addo and former President John Mahama asked for good health, wisdom and long life for the National Chief Imam.

Sheikh Osmanu Nuhu Sharubutu was born at Accra cow-lane in April 1919 by reputable parents from a well cultured and knowledgeable House.

His father, Sheikh Imam Nuhu Sharubutu was the Imam-Raatib (regular or residential Imam) of the Accra Central Mosque in the late 1960s to 1982 when he demised.

His mother, Hajja Ayishatu Abbass popularly known as Mma Tasidi, may her soul rest in peace and perfect bliss, also contributed immensely to the moral and psychological development of her son by ensuring that he had the proper home upbringing to go side with Islamic Education.

His mother was the sister of the Greater Accra Regional Imam who also rose to be called the National Imam (from late 1933 to 1960), Sheikh Imam Muhammed Abbas popularly known as Mallam Muhammad Mazawaje.

Mallam Osmanu continued with research on Sufism, by often devoting his leisure time in mosques to listen to the preachers of the Tijjaniyya movement and Sufism.

When his maternal uncle Sheikh Imam Alhadji Mohammed Abbas Mazawaje, who was the Accra Chief Imam saw the devotion, interest and handwork in Osmanu he introduced the Tijjaniya Movement’s Special Meditation to him, which he readily embraced.

He pursued the Tijjaniya Meditation till the arrival of the grand pioneer of the movement, the torch bearer and supreme commander of the Tijjaniya of the 20th century, Grand Sheikh Alhadji Ibrahim Nyass from Kaolack in Sénégal.

Sheikh Ibrahim Niass taught Mallam Osmanu the deeper spiritual aspect of Sufism and rudiments of mysticism and eserotics which smoothly paved the way for Mallam Osmanu to become a truly leader in the Tijjaniya Movement in Ghana.

His appointment as National Chief Imam

Interestingly in 1974, after lengthy discussions among the traditional and tribal chiefs, academics, Islamic scholars, and religious personalities, a consensus was reached for Sheikh Osmanu to be appointed as the Deputy Regional Chief Imam of Ghana, deputising his cousin, Sheikh Imam Muhammed Mukhtar Abbas who succeeded his father.

The appointment of Sheikh Osmanu as deputy Greater Accra Region Chief Imam was done in consideration of the unique qualities, Intellectual capacity, dedication to teaching and passion for Islam and exemplary lifestyle in him, but he turned down their offer which was forced on him by the Prominent Muslim Chiefs who persistently asked him to give it a serious thought stressing to him that it could be a divine call to serve God.

Subsequently when it dawned on Sheikh Osmanu that it was a divine call for him to serve Islam and Muslim communities, he finally accepted the position as the acting Greater Accra Regional Chief Imam until 1993, when he was ceremoniously appointed as the National Chief Imam of Ghana to head the Ghanaian Muslim Communities.

Sheikh Osmanu was well known for his exemplary lifestyle and generosity to people who called on him with their personal problems. He has built many Arabic Schools, Islamic Centers and Mosques.

Normally he spends huge sums money in Organising conferences, seminars and symposia on thorny Islamic issues prevailing in the Islamic societies and the country as a whole.

From the amounts given on him Sheikh Osmanu deserves the award given him by the University of Ghana who bestowed on him an honorary Doctorate Degree.

He deserves more of that from any Islamic University or Higher Institution of learning; also he really deserves the accolade of a great Muslim leader due to his immense contribution and love for maintaining peace and development in Ghana.

He is also contributing to the revival of good values and reform in the Muslim youth, Islamic faith and the Moslem communities.

To sum up, Sheikh Osmanu ranks

high among the erudite and prominent Islamic Scholars Ghana has ever produced, among his contemporaries are sheikh Kamâludeen who was chosen directly by Sheikh Osmanu to serve as his Deputy National Chief Imam of Ghana and the late Sheikh Alhadji Haroun Rasheed.

Sheikh Dr. Osmanu Nuhu Sharubutu is the Grand Khalipha of Sheikh Ibrahim Niass from 1972 to date, a title that he personally considers and cherishes more-than the National Chief Imamship position.

In recent times, to climax his passion for education, smooth and mutual interfaith relations and peaceful coexistence, peace building and unity, he founded two organisations that are making great marks and impacting positive changes in the lives of Ghanaians and the World in general.

The accomplishments of Sheikh Dr. Osmanu Nuhu Sharubutu at a glance;

1. The establishment of the Office of the National Chief Imam of Ghana in 1992

2. Engineered the realisation and manifestation of two (2) national holidays for Muslims in the official calendar of the Republic of Ghana

4. Self -trained, educated, sponsored and empowered over 50 well disciplined and taught students in Islamic studies and they have become force to reckon in the Muslim community in Ghana who have excelled in the field of Islamic knowledge and jurisprudence

5. Personally promoted Islamic education and encouraged the establishment of a unique system of education in Ghana, the marriage of traditional Islamic institutions and secular education to promote the acquisition of both.

7. Self-sponsored (financially) hundreds of students to attain circular education in Ghana and abroad.

9. The establishment of an organisation that promotes peace, unity and sustainable peace in Ghana and abroad; the Islamic Peace and Security Council of Ghana (IPASEC) www.ipasecgh.org

10. The establishment of an orphanage to look after the education and welfare of homeless Muslim kids in Ghana; the Nuuru Usmaniya Foundation for Humanitarian Services and Development (NUSMA

12. Engineered the attraction of the financier organis­­­ation (Hunan Development International Foundation-HUDAI from Turkey) on the ongoing construction of the National Mosque at Kawo Kudi, Kanda, Accra.

15. Personally officiated over the naming ceremonies of over 10,000 Muslim children.

16. He was decorated with honors by the premier nation’s university, the University of Ghana, Legon in 2006 with doctorate degree for his works in humanities, teaching, impacting knowledge and peaceful activities.

17. Several other local and foreign universities awarded him with doctorate degrees.

4. Sheikh Alhaji Mudassiru Adeleke Shitu Bulala, the Chairman of Al-Kanz magazine in Nigeria and CEO of multinational group of companies in Ajay, Lagos

6. Minister Louis Farakan, Leader of the Nations of Islam in America

7. Minister of the Religion, Dr. Khalid Yasin from the United States of America

Ironically, all the above dignitaries revisited the National Chief Imam several times on their own personal accord on account of his leadership and hospitality.

Young Osmanu started his education at home from his father during the day and with his mother at night.

It was widely reported and confirmed by Sheikh Osmanu himself that his mother was given to the father by his uncle, the late Imam Abbas Mazawaje who saw in his father high degree of fear of Allah and qualities of leadership.

Sheikh Nuhu Sharubutu, the father of young Osmanu was a prominent student of Sheikh Imam Abbas Mazawaje and became a member of the House.

Young Osmanu grew up to be a truly Islamic Model and a Unique Islamic heavyweight in knowledge and wisdom worthy of emulation.

At any point in time since his childhood till date he has been hammering on the need for all Ghanaians, Muslims and Christians to live in peace, saying that any divisive tendencies could leave room for our enemies to penetrate and defeat us.

His journey to Kumasi

When his father saw his true devotion and love for books and knowledge, he decided to send Osman to a new learning environment.

It was later decided that the Garden City and the Capital of Ashanti Region becomes his new learning destination.

That was where he went through a highly advanced course in Arabic Grammar, Arabic Literature and Texts, the study of Islamic Jurisprudence and Al-Hadiths (practices of the Holy Prophet).

He remained there until he graduated with distinction from Kumasi.

The aftermath of his journey to Kumasi

After his advanced studies in Kumasi, Mallam Osmanu became a completely changed and reformed personality.

This is due to the deep knowledge he acquired outside his original environment and his ability to imbibe the moral teachings from his teachers.

After a careful contemplation, he later took a decision of devoting his time to teaching the Muslim youth who are keen in learning to become Islamic Scholars, thinkers, teachers and imams in future.

Even as a teacher himself, he continued to have the desire and love for pursuit of knowledge to the extent that anytime he heard of an Islamic Scholar, he rushed to fall on his feet as a student to seek further knowledge thereby benefiting from that scholar.

Among the illustrious scholars and Sheikhs who taught Mallam Osmanu are Sheikh Alhaji Mohammed popularly known as Baraw, may he rest in peace.

Another famous Sheikh who served as a tutor and instructor to Mallam Osmanu was Sheikh Abubakar Fulaaty Al Kanawy who hailed from Nigeria.

It was this Sheikh who taught him Arabic Culture, Al-Hadith of the Holy Prophet, Arabic Texts and Fundamentals of Sufism.