Flashback:Obama's Health Chips And The Mark Of The Beast (666) 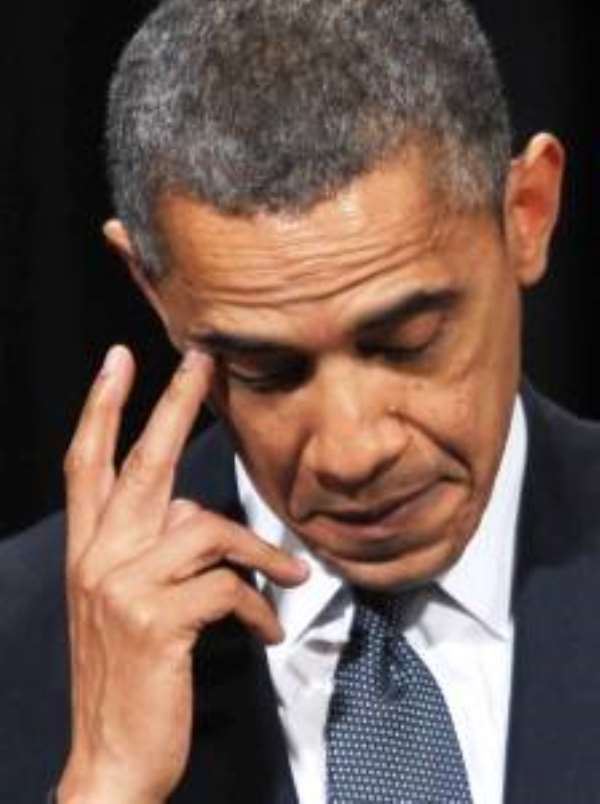 Written by Obinna Akukwe on 04-08-2013
Iwrote this piece in August 2013 and was first published by Modernghana, Spyghana and thenigerianvoice news before it went viral worldwide with numerous feedbacks and concerns from the overseas readers. Eight years later the views therein has become relevant in view of the Chinese conspiracy in spread of Covid 19, Incompetency of World Health Organization in Information Management of the pandemic , the controversy over implantable RFID Vaccine from Bill Gates and concerns over the 5G network and it abilities to turn humans to zombies. The fears as contained in my widely published piece, eight years ago, is becoming real today and every Christian and Human dweller must heed the warnings and frustrate the plans for a new world order of artificial intelligence and mind manipulations.

Read More: Obama's Health Chips And The Mark Of The Beast (666)
See article below
The recent health care reforms of Barrack Obama is being associated with the mark of the beast 666 . A controversial section of the Health Care Reform act talked of '(ii) a class II device that is implantable, life-supporting, or life-sustaining'. One of the class (ii) devices is an implantable Verichip or RFID-Chip. Verichip is an inject-able identification chip that can be inserted under the skin of a human being to provide biometric verification. It is about the size of a grain of rice and holds an identification number, an electromagnetic coil for transmitting data, and a tuning capacitor all enclosed inside a silicon and glass container that is compatible with human tissue.

Some of us with good background in database administration understands the value of comprehensive database in healthcare especially if at the tip of a finger or a Structured Query Language, every relevant data about a patent's health history could be glanced for statistical analysis and proper medical decisions.

Beyond the seemingly harmless venture comes a chip which has the ability to be used to manipulate human beings.There is a report in the early eighties that some British scientists used some human beings as guinea pigs in a secret experiment to discover the potency of implantable devices on the human mind. They discovered that those so tested behaved like human robots.

The UK government was said to have quietly quarantined the research for public safety. This research and numerous others from different agencies on the effects of chips on the human mind shows that this seemingly harmless chips technology is capable of being used for ulterior purposes

Human beings have progressed with the use of digitized numbering system. Since the introduction of bar code , the use of unique product identifier has increased.This enables goods to be tracked and traced to the sources including originating batches, products,manufacturers, cities etc. It also helps in tracking goods at stores for inventory, payments etc. Other unique ID system are visible in credit cards,loyalty cards, ATM cards and other identification processes.Technological evolution led to the introduction of chips technology . Since the introduction of RFID chips by British scientist Kevin Warwick in 1988, its use has been applied to different spheres of life. All these are human efforts to make life, commerce, business etc easy .Therefore, technologically and expediently, chips technology is necessary for accountability, identification and accessibility.

The church leaderships in the US have cried out against the introduction of the chips in Obama Health care reforms. Popular Indiana end-time pastor Paul Bergley have variously condemned the move as tilting towards the mark of the beast. Bergley is reaching over 12 million Americans on the air with his views on the beast mark. Another California Mega pastor Greg Laurie had warned Americans that "The antichrist's economic policy will be very simple. Take my mark and worship me, or starve to death No mark, no merchandize No seal, no sale." and he added that the technology to enforce this is already in place.

I remember in 1994 when a group of Korean preachers came to Nigeria and was hosted by Archbishop Dr AA Nwodika ( then Rev Dr Nwodika) at Grace of God Mission, 2B Owerri Road, Enugu. With all their preachment, I still remember that they warned the congregation during the 3 evenings programme that Jesus Christ appeared to them and asked them to warn the world of the antics of the antichrist and how he would use chips technology to cause people to accept the an evil mark. They warned the audience never to accept the semblance of any mark for whatever reasons as it is a trap from the devil. This warning given in 1994 by the Koreans needs further examination in the light of Obama's chips implantable healthcare policies.

Some theologians have labelled Obama as the Anti- Christ. I may not agree with them, however, I believe that anybody who is not spirit filled could be used to fulfill satanic agenda unknowingly. It is known that even church leaders who refused to follow the leading of the Spirit of God could become tools in the hands of the devil and they may not be aware of it. Politicians and business men have been used by the devil to bring poverty, sorrows, wars and death to their subjects due to irrational actions manipulated from the kingdom of darkness.

Particularly in Nigeria, some Christian and Muslim religious leaders receive gratifications from some corrupt politicians for political and social endorsements. Though the religious leaders increased in financial net-worth, the wrong signal was unwittingly sent to their members-that even God can be bribed with corrupt money.These clergymen may not even know that they have advanced the kingdom of darkness they preach against

However, the Bible prophecy have warned Christians who are still interested in going to heaven, to beware of the mark of the beast, either on their hands or forehead. The Bible said that at that time, there will be no buying or selling except with the mark . In Revelation 13 vs16,17 'He causes all, both small and great, rich and poor, free and slave, to receive a mark on their right hand or on their foreheads, and that no one may buy or sell except one who has the mark or the name of the beast, or the number of his name.'

This simple predicts the global acceptance of chips as means of commerce. The Central Bank of Nigeria (CBN) has introduced cashless society in many cities. It started with Lagos and after a year of experiment, it was extended to Abia, Anambra, Ogun, Rivers and Kano States and the rest of the cities would soon follow. Initially, lots of persons kicked against it, but with the apex bank insisting on nothing less, people started to adopt to the cashless system. The use of Point of Sales( PoS) Terminals in different places of commerce is becoming popular. Internet marketing, banking and commerce is becoming popular and soon the apex body may go further to introduce the idea of chips, as is being done in the US

Therefore,whether for health purposes, social security, physical security, commerce etc all well meaning citizens of every nation must resist the implantation of chips technology in the human body. Christians, Muslims, Pagans, Traditionalists and whatever shade of belief notwithstanding, everybody should resist this attempt because it will be used by satanic forces in the future to manipulate the freedom of the mind.

The Bible says that anyone who receives the mark is damned forever. Revelation 14vs 9-11 stated that "If anyone worships the beast and his image, and receives his mark on his forehead or on his hand, he himself shall also drink of the wine of the wrath of God, which is poured out full strength into the cup of His indignation.

He shall be tormented with fire and brimstone in the presence of the holy angels and in the presence of the Lamb. And the smoke of their torment ascends forever and ever; and they have no rest day or night, who worship the beast and his image, and whoever receives the mark of his name." -this include Christians,Muslims, Pagans or whatever-it is a global warning

Humanity is in pains today with all the killings, poverty diseases, humiliations, tyranny etc because Adam and Eve failed to obey simple instructions -'' thou shall not eat of the fruit in the midst of the garden''-until the all loving God threw them out of the garden to face the reality of a rampaging serpent

I like Barrack Obama and I know that his presidency has brought appreciable economic recovery, security and international acceptance to the US. Obama has used cautious diplomacy in dealing with other nations whose interest is at variance with the US- reducing America's strategic enemies. However, my fondness for Obama cannot becloud my sense of reasoning to accept this sinister strategy of embedding chips inside a human being in the name of health care.

Coup plot: Money no be problem — Mac Palm assure soldiers in...
57 minutes ago