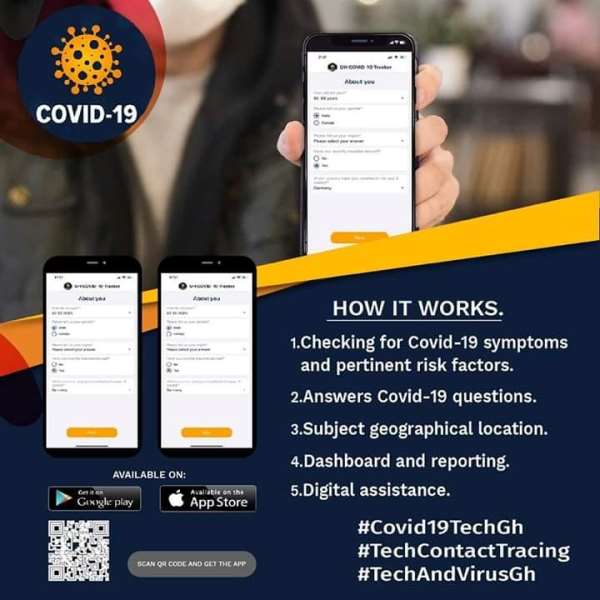 The Government of Ghana launched a Covid-19 app yesterday amidst limited pomp and pageantry. The app is meant to track the spread of among the Ghanaian populace. Some people believe this investment is completely misplaced because in their thinking, the citizens' need food rather.

Others are concerned about the foreign origin of the software developer and the $1.4 million cost involved as speculated. They believe, the government could have engaged a local developer at a lower cost in the light of promoting local content and capacity building as well as preventing the flight of our limited financial resources.

There is another group led by Bright Simons, the popular Honorary Vice President of Imani-Ghana, who questions the development of an app at a time when the owners of technology platforms like Google and Apple on which this app will operate have banned all such apps. This view, however, could have been more accurate.

A quick search online (https://www.cnbc.com/2020/03/05/apple-rejects-coronavirus-apps-that-arent-from-health-organizations.html and others) could have revealed that government-approved Covid-19 apps are exempt from this crackdown by these platforms. Like me, it is not uncommon to hear Bright constructively criticising the government and the academic community for a lack of research on critical issues facing the nation. This critique, however, falls short from my expectations.

However, a little reading by citizens could have saved them the anger. A little circumspection by Bright Simons and his disciples could have revealed that the app is a data collection and analytical tool, a part of the research process he advocates for, which will provide us with the needed real-time information about the spread of the virus. With technology and statistical methods such as machine learning, this could be a low-cost tool in our efforts at targeting people and groups for mass testing for the virus more effectively given our limited resources.

In other words, the nation could be saving money through efficient targeting and testing rather than waste money on inefficient testing approaches like waiting for people to report symptoms at the hospital. Simply, this could be an imperfect alternative to mass testing for the virus given the predictive abilities of machine learning technology. A little patience could have saved us the misinformation making the rounds. Notwithstanding, all of these concerns are legitimate given the need for more transparency around this and future deals.

As a Researcher and Policy Analyst, I hold a different view in terms of the usefulness of this app to our fight against the virus after examining the divergent views out there. This situation should not be considered as a usual binary decision between choosing and app and feeding the masses. The app is complementary!

I therefore support the data-driven approach adopted by the government, although the processes could be made quicker and more transparent. I believe the Covid-19 app is a proactive and efficient approach to gathering data on how people's health conditions are changing over time to inform national action and intervention. Remember, the symptoms are key in determining who has or is likely to have Covid-19 or not.

This is part of the data, the government hope to collect via the app. Therefore, the app is not useless as some people are intimating profusely on social media. People are just not used to this form of tracking, a sign of the need for better government communication.

Nevertheless, there are also legitimate concerns about how a four-paged questionnaire or so as attached could help track the disease. For example, how is the app going to track my condition after I have filled it? This is where I think the government did a poor job at educating the public on how the app works at the launch. At least, one of the speeches delivered could have focused on that.

This brief opinion piece is meant to express my understanding of how the app works or should work to be useful to our fight against the virus.

Now, this is how I understand the workings of the app, which is probably missing from the discourse so far. The questionnaire is meant to collect panel data (data on people over time). So, filling it once would be useless in helping to track changes in your symptoms and health condition, unless, there are people in the back office who will call us for updates on our health conditions periodically. The key word here is periodically! This approach is just inefficient if this is the case.

The rationale in my thinking is for people to update their health conditions PERIODICALLY as they change, so that the researchers at the back office will have more than one data point across time and people to be able to track changes in health conditions generally. So, the TRACKING bit is only possible in an efficient manner if these periodic updates are made.

It is similar to administering the same questionnaire to the same people at different time periods. We can observe the changes in the answers provided, which could help in forming an opinion about whose reported symptoms over time are similar to those expected of Covid-19, where such people are located and their concentration in an area. With the use of mobile technology, you could also track the movement of those people, which could be helpful in contact tracing, since some people may forget all the places they have been over a period of time.

In other words, the app is to help democratize medical diagnosis via technology, similar to what Medical Professionals do when you consult them. This is not much different from many of the current technology apps for health diagnosis; some of which we are already using in this country.

This is not data Google has or will know just by having your mobile number without the people supplying additional information, as some tech guys are speculating on their Facebook walls. If the so-called app developer is American, I am sure they will have a fair idea of what data Google has and does not have.

The lack of the required data by Google is probably the reason this app has been developed. In this case, all of these tech guys, many of whom are genuinely concerned and others just grieved, need to be circumspect about the kind of information they put out there. Many may be speaking out of a lack of understanding of how the app works and that cannot be a demonstration of professionalism.

The government must quickly come out and clarify how the app works and the duty of citizens. The cynicism out there is understandable but citizens must be careful about where they get their information from and how they spread falsehood online. It will come back to hurt us!

Disclaimer: The views expressed here are solely the views of the author and not necessarily the views of institutions he is affiliated to, including the KNUST.