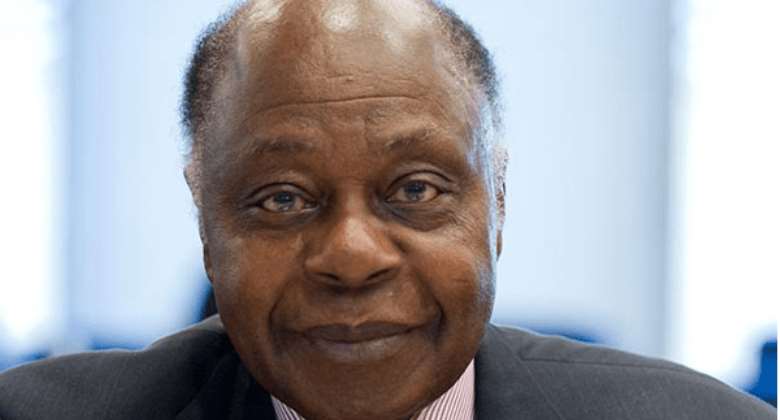 Since I began a study of the life of the late Prof. Albert Adu Boahen, one of Africa's most renowned historians (who died on his birthday, 24 May 2006) the element in his life that has constantly astonished me most is his immense courage and intolerance of dictatorial nonsense.

It was he who, in a lecture at the Royal African Society in London on 3 February 1966, dared to expose three of the men then regarded as “authorities” on the history of Ghana, as lazy historians who had largely distorted our history with their relatively shoddy scholarship.

Chairing the lecture was no less a person than Roland Oliver, head of the African section of the London

School of Oriental and African Studies (SOAS), where Boahen had got his doctorate -- under the supervision of Oliver himself!

In doing what academics call a "hatchet job" on the three "authorities", in the presence of Oliver, Adu Boahen could thereby be classified as engaging in an instance of committing academic hara-kiri, for “insolence” against the more senior academics in one's field, could result in the blighting of the career of a young lecturer like himself.(He'd only been a lecturer at Legon for seven years when he engaged in this "patricide" against the British "authorities" in his field!)

Not only that – among the historians Adu Boahen criticised was Professor J D Fage, an early member of the very history faculty of the University of Ghana, from which Boahen had himself graduated in 1956, before going to SOAS. And Fage was a close friend and collaborator of Roland Oliver's; (Oliver who had, I repeat, supervised Boahen's own Ph.D studies at SOAS!) Oliver was, in fact, so intimate with Fage that he'd visited Fage when the latter was at Legon, and was later to collaborate with Fage in editing the eight-volume Cambridge History of Africa (1975-86.)

Now, the convention was that whenever someone was giving a lecture chaired by his former professor, he was expected to adopt a deferential tone. But in Adu's case, it was the opposite that took place. He picked out three of the books normally regarded as "authoritative" historical works to which anyone interested in Ghana's history was "always referred": (1) A History of the Gold Coast and Ashanti by W. Claridge (first published in 1915); (2) History of the Gold Coast by W. F. Ward (published "in 1948) and (3) Ghana, An Historical Interpretation by J. D. Page (published in 1961) and basically tore them to pieces,

Adu declared, (I imagine with a rather impish smile): "I must start with a confession... I am going to say a lot of things that may sound highly controversial and probably revolutionary, and ... the main reason for this... [is that] "my approach to the history of Ghana... is different. Claridge, Ward and Fage looked at the history of Ghana essentially from the outside, and their main concern was the activities of Europeans in Ghana... why and when Europeans came in, what they did and so forth. [But] my colleagues and I [at the faculty of history of the University of Ghana] are now looking at [Ghana's history] from the inside,that is, from the African standpoint.

“For instance, we are now interested not so much in why Europeans began to come to West Africa in the 15th century as in what they found when they did arrive....[and] the effect of [what they did] on the social, economic and political and institutions of the Ghanaians... I and my colleagues are now using sources which the earlier historians never used or even had access to.

“The three historians [Claridge, Ward and Fage] used only published sources, mainly in English, and some oral tradition. Now, besides these, we have been exploring unpublished documentary material not only in English but also in Dutch, Danish and Portuguese...

“We are also now relying very heavily on Arabic sources written mainly in Northern Ghana by Ghanaians themselves. This particular source, (Adu continued) “whose richness is now becoming obvious, has been hitherto virtually ignored and it is this neglect that accounts not only for the fact that Northern Ghana has received only scant attention in existing history books, but also, for the erroneous, but widely held view, that literacy was first introduced to Ghana by European missionaries”.

Claridge, Adu Boahen pointed out, had only "devoted eight pages, out of 1,224” to the internal history of Ghana - “a clear indication of the importance he attached to this particular theme". Ward too had only discussed it in “the first 43 pages of his 413-page book”, while Fage, for his part, only discussed the theme "in the first four pages and the last ten pages of his book"! (Boahen did not say this but in doing what they did, the three British historians had endorsed the view of the famous Oxford historian, W Trevor-Roper, that there was “no history” in Africa but “darkness; but darkness is not history!” )

Adu went on: “ ... Portuguese records [show that] there were states existing on the coast of modern Ghana when the Portuguese arrived from the 1470s onwards. In fact, the names of the kings of two of these states, Aguafo or Komenda, and Fetu, are mentioned in a letter written by the Governor of Elmina [Castle] dated 18th August 1503. And in a work written in 1505, the author, Pacheco Pereira, describes [for instance] Axim, the Kingdom of Ahanta, the town of Sama [Shama] in the Kingdom of Jabi [Gyebi], the village of Komenda, the town of Cape Coast and the Kingdom of Asebu..”

Adu revealed that "In the recently-published Guide to West African History in Portuguese Archives, there are also clear references to gifts being sent to the kings of Akan, Abermus [Akwamus] and Asain [Assin] in the interior, and also [references] to traders from these kingdoms coming to Elmina by 1520. Clearly, then, the first states emerged in the south-western parts of Ghana not in 1550 or 1660, as Ward thinks, but before.”

Next, Adu, who was so good at mathematics at Mfantsipim that his mates were surprised that he went to read history instead of maths at Legon) meticulously corrected many errors the three British historians had made in dating several of the most important landmark events in Ghana, such as the reign and deaths of several Asante Kings.

Now, remember Adu Boahen had been lecturing at the University of Ghana, Legon, for only seven years when he took on these British “authorities” in their own "temple" of African studies in Britain. For Adu, this was a very dangerous thing to do. For academics can be very bitchy creatures, and if you cause them umbrage, they are likely to bear you a life-long grudge to which they will give expression with whispers in the back-rooms of academia, as well as the publishing houses – the holy places where books are secretly commissioned; future academic appointments or invitations to lecture at prestigious institutions mooted; and reputations destroyed with vengeful back-biting.

That Adu Boahen didn't care a fig about these things that could happen to him if he was perceived as an arrogant young man who needed to be brought down a rung or two, demonstrates the enormous intellectual courage that he possessed. Indeed, he might have – rather – created his own reputation as a solid historian with his attitude, for in matters of the intellect, respect for the errors of others is as treasonable as committing the error oneself. With African intellectuals, especially, Adu's words were received like a balm to a tortured body.

Now, as it turns out, Adu also had enormous physical courage as well, as I have been discovering bit by bit. On Sunday, 1stMay 2017, I had the pleasure of talking about Adu in London to his friend and Legon mate, the distinguished lawyer, Dr Thomas Mensah. https://en.wikipedia.org/wiki/Thomas_Mensah_(lawyer )

Thomas Mensah is a man after Adu Boahen's own heart, for he too possesses an enormous amount of what can only be described – figuratively – as “animal courage”. The two friends were involved in two incidents that could have been life-altering to both of them. One occurred while they were both final-year students at Legon, and the other, while they were lecturing at the same University – Adu in history and Thomas in law.

The two were both resident in Akuafo Hall, and one day, in their final year in 1956, they were in a group conversing and listening to background music (Handel's Water Music, as Tommy Mensah remembers it) in the Junior Common Room, when a British lecturer from the geography department entered the Common Room, marched straight to the radiogram and switched off the music.

He then addressed these words to the students: “If you won't listen to the music but want to talk instead, then you might as well switch it off!”. He then left in a huff.

Now this was only a year before Ghana's independence and so most of the country's youth were in a rebellious mood – in anticipation of the imminent demise of British cultural domination.

So, no sooner had the British lecturer left than Adu Boahen went and switched the music back on again.

The Briton came back to the JCR. “Who switched the music back on again?” he asked.

He was no doubt expecting the usual cowardice that groups display when one of their number does something and a figure of authority demands to know “who done it.” Well, he must have got the shock of his life when Adu Boahen boldly told him it was he who had switched the music back on!

“This is our common room,” Adu declared. “You have no right to tell us what to do here, so long as we have not broken any University rules.”

Instead of the other students quaking in their boots at what the British lecturer could do to their colleague, a second student stood up and took Adu Boahen's side. He dressed the British lecturer down in legal terms (for it was the final year law student, Thomas Mensah!)

“Can you tell us which of the JCR Rules we have broken?” Mensah asked the British lecturer. “It may be the custom in Britain to listen to music in total silence. Here in Africa, we dance to music and we also use music as a background to our discourse. That is our culture” and we are entitled to practise it in our own allocated space!”

“YIEEEEEEEEE!” the other students cheered.

The British lecturer was stung by the 'hauteur' which the students had exhibited to him. He went straight to Prof Taylor, the Master of the Hall (another Briton) and laid a charge against the two students for their defiant attitude towards a lecturer!