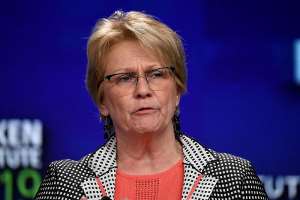 OCCIDENTAL Petroleum Corporation (OXY), the American company that sold Anadarko’s African operations to TOTAL S.A. last year, has started using proceeds from the sale to pay down its debts at a time when approval processes in Ghana and Algeria were taking longer than initially programmed.

In a conference call with journalists, analysts and investors on February 28, the Senior Vice-President of Strategy, Business Development and Integrated Supply of OXY, Mr Oscar K. Brown, praised Ghana’s oil as being of “high quality” and a source of “significant cash flow” that had helped reduce its indebtedness.

The revelation came about seven months after OXY, an American company, took over Anadarko Petroleum Corporation, another American firm, before selling its African operations to the Paris-based TOTAL S.A. for US$8.8 billion.

They also came at a time when approval processes for the sale in Ghana and Algeria had dragged, mainly as a result of a seeming lack of consensus on tax liability arising from the deal and the transaction’s ‘nonalignment’ with national policy.

Here in Ghana, the GRAPHIC BUSINESS has been reliably informed that Anadarko and the Ghana Revenue Authority (GRA) were in a tussle on the payment of corporate taxes from the sale.

The paper understood further that the tax authority had concluded that the sale was liable to corporate tax, which it assessed to be around US$510 million – a figure Anadarko is yet to accept.

"We'll still work to process with Algeria and Ghana, but we do have a plan ‘B’."

In August last year, OXY concluded a deal that led to the acquisition of the entire operations of Anadarko at US$38 billion after beating its rival, Chevron to the transaction.

As part of the global acquisition arrangement, OXY agreed to sell Anadarko’s African operations to TOTAL S.A., and that divestiture was effected at a cost of US$8.8 billion to the French oil giant towards the end of last year.

Although the African sale occurred around August last year, it was yet to be approved by the governments of Algeria and Ghana.

In February this year, the Deputy Minister of Energy in charge of Petroleum, Mr Mohammed Amin Adam, said that the government would only approve the transaction after Anadarko had satisfied all the requirements relevant for such approvals to take place.

He said although the company had submitted all documents, it was yet to procure a tax discharge certificate from the GRA to complete the list of documents required for the approval processes.

He said the action was because the transaction was “incompatible” with his country’s laws.

Responding to a question on the status of the sale of Anadarko’s African operations and its impact on the company’s targets, the Senior Vice-President OXY said his outfit would continue to work with TOTAL S.A. and the governments of Ghana and Algeria “toward a positive resolution of the divestitures.”

“There is an increased risk, as you point out, associated with both timing and closing certainty (and) so, that has become clear,” Mr Brown said, but gave an assurance that the company would report more whenever it had “something more substantial to talk about.”

He explained that it was “hard” to comment beyond what was in the public domain already on the transaction, given its definitive agreement with TOTAL on the assets transfer.

He said his outfit was cognizant that the assets in question were very important to the countries involved and that the interest of the countries to retain foreign investment was “very sensitive to all their constituents,” hence the decision to be careful with what it says on the matter.

While expressing optimism that the issues around the transaction in the two countries would be resolved to enable it to meet its revenue target, the Senior Vice-President said the company would not hesitate to sell other assets to make up for any deficit in projected outflows that would arise from a drag in the approval processes.

The President and CEO of OXY, Madam Vicki Hollub, who also participated in the conference, described such a plan as “Plan B.’

“We'll still work to process with Algeria and Ghana, but we do have a plan ‘B’,” she said.

“We can go to plan ‘B’ and replace the proceeds we would have gotten from Algeria with other asset sales that essentially have about the same cash flow impact,” Madam Hollub said.

Diabetics, Hypertension Are Associated With Covid-19 Deaths ...
9 hours ago