Amputees shoot for a place in Central African society 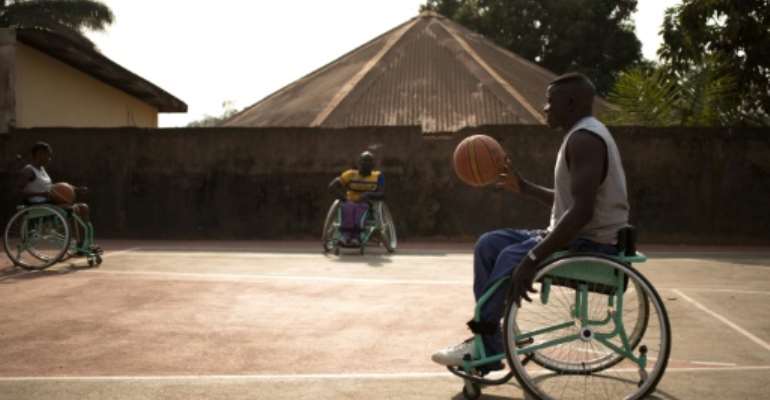 The CAR wheelchair basketball team came in second in an African parasports contest in 2001. By FLORENT VERGNES (AFP)

The players swing into action, passing the ball, jockeying for position and using feints to distract foes, but with tyres hissing across hot asphalt, this is no regular basketball practice.

Around the ball, object of a veritable national sport in the Central African Republic, wheelchairs spin in a ballet propelled by the steely arms of the amputee players, twisting right round on the spot or twirling on one wheel.

Their coach Idriss Feissal, himself wheelchair-bound since the age of five, exhorts a player: "Come on! Throw it further!"

In his 40s, Feissal has the biceps of a hefty weightlifter.

"When you work on physical shape, your handicap changes," he says.

CAR, one of the world's poorest countries, has been ravaged by three civil wars and many thousands bear the scars of conflict. 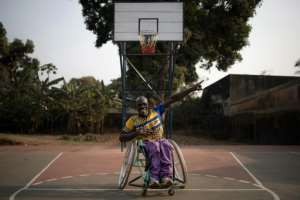 Living with a handicap is made harder by the lack of infrastructure in the former French colony.

The basketball players have to deal with several kilometres (miles) of potholed tarmac and dirt alleyways to get to the practice venue, under a scorching sun.

"Sometimes, they end up by quitting," said Feissal, who has belonged to the national wheelchair basketball team since 2003. The team won second place in an African parasports contest in 2001.

He has invented a model of pedal tricycle especially adapted for handicapped people, but very few people can afford such a vehicle.

'It was over for me'

Bangui boasts a unique clinic founded in 1997 where people struggling with motor disabilities can find help, the centre of the National Association of Rehabilitation and Apparatus of the Central African Republic (ANRAC).

Sitting on a wooden bench at the entrance to the small ANRAC building, 40-year-old Eddy Ngalikossi is happy to show off his prosthesis.

A dealer in high-tech products, Ngalikossi was shot by rebels of the Seleka alliance, a mainly Muslim coalition that took power in 2013. 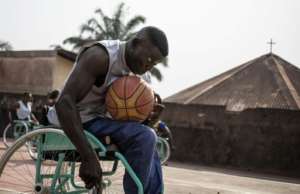 Living with a handicap is made harder by a lack of infrastructure. By FLORENT VERGNES (AFP)

The badly injured man was taken to hospital and had to undergo a leg amputation, leaving him with no job and no means to feed his children.

"When this happened, I knew it was over for me," he said. At the time, the country was deep in chaos and its basic health care facilities were overwhelmed.

But the ANRAC has benefitted since 2013 from the support of the International Committee of the Red Cross, which paid for equipment and staff training.

At its facility, a dozen workers cut, sand and fit custom-made prostheses for patients.

"Today I can walk with a cane," Ngalikossi says proudly.

But the training is hard. The amputees must learn to walk on bumpy terrain, to find a seat in an always crowded minibus, and simply to climb stairs.

The 339 patients taken in by the centre last year are a drop in the ocean of the 30,000 people estimated by the World Health Organization to be handicapped or facing the mental stress of conflict in the CAR.

ANRAC director Godefroy Bombaida believes that the WHO estimate falls short of the reality. "Since the crisis, the number of amputees has tripled," he said.

Care for patients in rural areas is limited by the lack of basic infrastructure, while few people in Bangui have learned how to make prostheses and treat the injured. 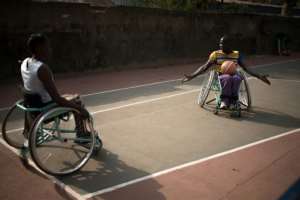 The training is hard. Amputees must learn to walk on bumpy terrain, to find a seat in an always crowded minibus, or simply to climb stairs. By FLORENT VERGNES (AFP)

Plans are afoot to build a new centre with a capacity for 1,700 people, starting in May. The facility would also offer psychological help for people who are often socially isolated.

"Families are not easy. If you have the means, then okay. But if you don't have the resources, who is going to come near you?" Ngalikossi asked.

"When I lost my leg, I thought of committing suicide. And I know several handicapped people who did commit suicide, because of the lack of support."

Idriss has endured similar loneliness. "In the neighbourhood, everyone neglected me. It's thanks to competitions that I met my wife and started a family.

"Now, I travel. The people who neglected me are still back in the neighbourhood."