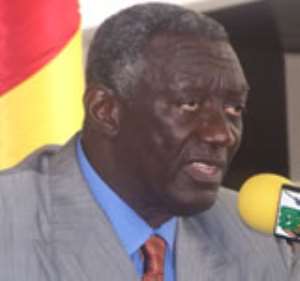 Accra, May 6, GNA - President John Agyekum Kufuor whose historic presence at the 11th awards of the Ghana Journalists Association (GJA) on Friday, was hailed by members of the Association, has called on journalists to be at the forefront of national development.

President Kufuor, the first Head of State of Ghana to honour the invitation of the GJA to attend the annual prestigious ceremony said journalists should extol to the public the finer aspects of the national cultural heritage to enable society to be filled with hope and a general sense of purpose and optimism about a nation strengthened in unity. "In so doing, journalists will also help the citizenry to develop and crystallise within their national psyche, a national orientation based on self-confidence, can-do-it attitude and the will to succeed despite seemingly impregnable obstacles."

The President who lauded journalism, as the fourth estate of the State noted that journalists should redefine their pivotal purposes and rules of engagement, adding that members of the GJA should commit themselves to national development as their top most priority. "We must stress the word national to bring into focus the competitive world in which Ghana must grow." He said.

President Kufuor who used his address to define the mandate of the Ministry of Information and National Orientation said the aim was to help Ghanaians to overcome the characteristic attitude of resignation, and the crab of pull-him-down syndrome.

" It will motivate and energise us as a people to kick-start the acceleration to the next level of national development," he said. He asked the new GJA executives, led by Mr Ransford Tetteh of the Graphic Group of Communications, to facilitate socio-economic and development journalism.

President Kufuor who handed over the coveted Best Journalists for 2005 to Ms Peggy Ama Donkor of the Ghana Broadcasting Corporation, also exploited the relaxed atmosphere at the function and danced to highlife tunes, attracting cheers from the guests who were thrilled by his graceful steps and agility on the dancing floor.

Mr Kwamina Bartels, Minister of Information and National Orientation, also used the occasion to explain the virtues of national orientation, saying it was an effective way to nurture nationalism. He said it was a move to re-orientate Ghanaians on nationalism and to learn how to sing the national anthem and recite the national pledge. "On foreign policy our orientation should be what is good for Ghana," he said.

The immediate past President of the GJA, Ms Ajoa Yeboah-Afari, commended the President for honouring the appeal of journalists to donate a state building, which had been transformed into an International Press Centre.

She said the awards night was historic since it was been held for the first time on the premises of the GJA and also the first time that an old executive was handing over to a new team at an awards night. Ms Yeboah- Afari who is the Editor of the Ghanaian Times stressed the need to make the position of GJA President a fully paid job. She expressed dissatisfaction about the unprofessional approach to journalism and said most of the offenders were not members of the GJA. Ms Yeboah-Afari appealed to President Kufuor to assist the GJA to acquire a means of transport.

Mr Paul Adu Gyamfi, Chairman of the National Media Commission called on journalists to use words, which he said was their stock in trade to bring about positive change, promote human rights and dignity and civility in the body politics.

Mr Tetteh expressed dissatisfaction about mediocrity in the media and the destruction of the image of individuals and organisations through unfounded allegations .in utter disregard of the ethics of the profession.

He announced a 5,000-dollar training package for the best journalist.

Mrs Leonora Kyerameteng, Coordinator of the National Governance Programme, who chaired the function, noted that media freedom, which was the price Ghana paid for the democratic process should be exercised responsibly.

She said media freedom should promote responsibility and not to be used to run down people.

The occasion was used to honour 20 journalists, which comprised Mrs Linda Asante-Adjei of the Ghana News Agency who won the best Health Reporting award.

You're A Blatant Liar; I've Never Attacked Any Religious Lea...
21 minutes ago