Who Is Afraid Of Witches On Campuses? 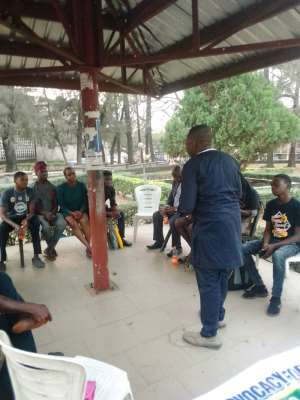 On January 30 2020, University of Ibadan Campus Humanists and Freethinkers held a talk on the theme: Who is afraid of witches on campuses? The venue of the event was the Tedder Hall Cafetaria. Students from Law, Political Science, Philosophy and Education faculties attended the program. The Advocacy for Alleged Witches(AfAW) organized the talk in response to the growing fears and anxieties over witches on Nigerian campuses, and to mobilize students against witch persecution nationwide.

To realize a witch-hunting free Africa in 2030 as envisioned by AfAW, a critical mass of students must be allies and advocates. Unfortunately, pervasive fears of the occult exist and persist in Nigerian schools. In November, christian students at the University of Nigeria in Nsukka protested the convention of an academic conference on witchcraft on the campus. The Christian Association of Nigeria and the Pentecostal Fellowship of Nigeria also issued statements opposing this academic meeting. Meanwhile, persons who are suspected of witchcraft are attacked and killed across the country. People blame alleged witches for various misfortunes including sickness, accidents and deaths in the communities. In most cases, young persons are the forefront of witch finding, witch hunting and witch persecution because they are made to believe that alleged witches pose a serious threat to their lives, health, future and progress. Incidentally there has not been any major effort to combat occult fears and anxieties on campuses.

There were two presentations at the event. Dr Olayinka Olatunde Ayinde, a psychiatrist from the University College Hospital in Ibadan, spoke on witchcraft and mental health. He made it clear that mental health problems had no causal link to witchcraft as widely believed in the society. Dr Ayinde urged attendees to be mindful of persons including some medical officers who associated mental health problems with the occult. People who have mental health issues are believed to be possessed by evil spirits and could spiritually infect others. Thus they are stigmatized and subjected to various rituals that include chaining, starving and violent exorcism. Many years ago, I attended a church program in Imo state where the presiding priest ordered that a man with mental health problems be bundled out of the building because he was spreading demons and could infect other attendees.

In my presentation, I discussed the aims and objectives of AfAW and the need for students to become advocates against witch persecution. Through its decade long campaign, AfAW plans to dispel witchcraft fears and anxieties on campuses and build a critical mass of students against witchcraft accusation, witch persecution and killing. AfAW will take its campaign to the tertiary institutions across the country including colleges of education, polytechnics and universities.

Earlier in the day, the university's Diamond FM interviewed me in their morning Safari program where I stressed the need to stop witchcraft accusation and witch persecution. I told listeners that the AfAW would support victims of witchcraft accusation as well as witchcraft accusers and believers. AfAW plans to work to protect and rehabilitate the accused and then enlighten and educate the accusers. Some listeners phoned in recounting their 'witchcraft' related experiences. Others stressed the urgent need for public education and enlightenment programs to eradicate witchcraft beliefs and other superstitions.