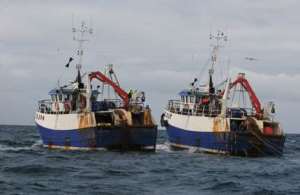 In June last year the vessel Lu Rong Yuan Yu 956 was caught with illegal nets and undersized ‘small pelagic’ fish onboard – the staple catch of the artisanal canoe fishers. The US$1 million fine that was imposed is the statutory minimum under Ghana’s 2014 Fisheries Amendment Act. However, owners have refused to pay the fine.

Last year, the Environmental Justice Foundation (EJF) praised the Fisheries Commission’s decision to publicly pursue the full US$1 million fine. This is worthy of recognition, the NGO said, since even after the act was passed other perpetrators have paid lower sums, or undisclosed amounts in opaque out-of-court settlements.

In 2017, for instance, the owners of a Ghanaian-flagged industrial trawler, Meng Xin 16, refused to pay a fine imposed by an out-of-court settlement committee in a case of illegal trans-shipment. The vessel has since paid an undisclosed sum and been re-licensed to continue fishing. Another vessel, the Meng Xin 29, which was fined for illegal fishing in 2019, has also refused to pay and since been re-licensed to fish.

Around 90% of Ghana’s industrial fishing fleet is linked to Chinese ownership, an EJF investigation revealed in 2018 . As Ghana’s fisheries laws prohibit foreigners from engaging in joint ventures in the industrial trawl sector, Chinese organisations operate through Ghanaian ‘front’ companies, using opaque corporate structures to import their vessels, register and obtain a licence.

These underhand dealings have precluded attempts to ensure the true beneficiaries of illegal activities are held to account, says EJF.

Both the Meng Xin 16 and Meng Xin 29 are linked to a Chinese company a recent investigation by China Dialogue revealed. In the current case, the Lu Rong Yuan Yu 956 is also operated by a Chinese company, Rongcheng Ocean Fishery Co Ltd, according to the website of the Chinese Ministry of Agriculture and Rural Affairs.

The company also owns another vessel which was caught in 2015 taking under-sized fish – juveniles that are crucial to replenish fish populations. They paid only GHS 200,000 (US$ 35,394) in fines, well below the US$1 million minimum stated in the law.

Failure to sanction those who engage in illegal fishing – and especially the destructive trans-shipment practice known as saiko ­– is driving the collapse of Ghana’s small pelagic ‘people’s fish’– and with them, the destruction of the livelihoods of canoe fishers and food security of coastal communities. Such has been the devastating impact of illegal fishing activities that Ghana now has to import around half of its fish, and local fishing communities are increasingly victims of the impact of rapidly declining fish populations.

Executive Director of EJF, Steve Trent says: “According to the Fisheries Act, failure to pay the fine within 30 days results in the matter reverting to the court. It is now essential that the court uses all legal options available to require payment of the fine and accompanying sanctions to ensure deterrence.”