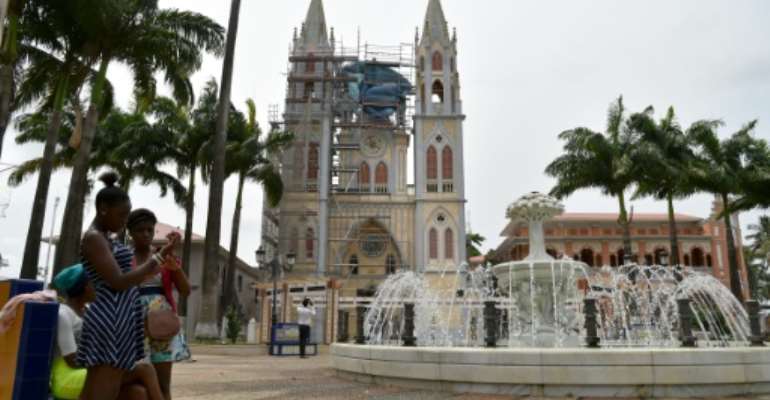 Built in a neo-gothic style between 1897 and 1916, the cathedral is one of the central African country's main tourist attractions. By ISSOUF SANOGO (AFP/File)

Firefighters battled to bring a blaze at Malabo's cathedral under control on Wednesday, as flames engulfed parts of the historic building, considered the most important Christian church in Equatorial Guinea.

Dozens of people gathered in silence near the cathedral in the early evening as the fire service sprayed water jets onto the century-old structure.

It was not immediately known whether anyone was hurt in the fire, in which huge flames consumed part of the facade of the building.

"We have just extinguished the fire, it's finished. The roof is gone, it is a catastrophe," firefighter Alfredo Abeso told AFP.

Another firefighter at the scene said: "The whole roof is gone, the interior is burned."

The cause of the fire is not known but the cathedral has been closed to the public since January 7 for restoration work.

Built in a neo-gothic style between 1897 and 1916, the cathedral is one of the central African country's main tourist attractions.

The blaze brought comparisons to the devastating fire that ravaged the 13th century Notre-Dame cathedral in Paris in April 2019.

The French Embassy in Malabo said the fire was a "cruel reminder" of the fire at Notre Dame.

"We share the emotion of our friends in Malabo and Equatorial Guinea and hope that the fire can be brought under control quickly," it said on Twitter.

Paris engineers are still working to stabilise the 13th century cathedral in the French capital after fire tore through its roof and dramatically toppled its spire last year.

#FixTheCountry campaign goes international with over 500,000...
13 minutes ago