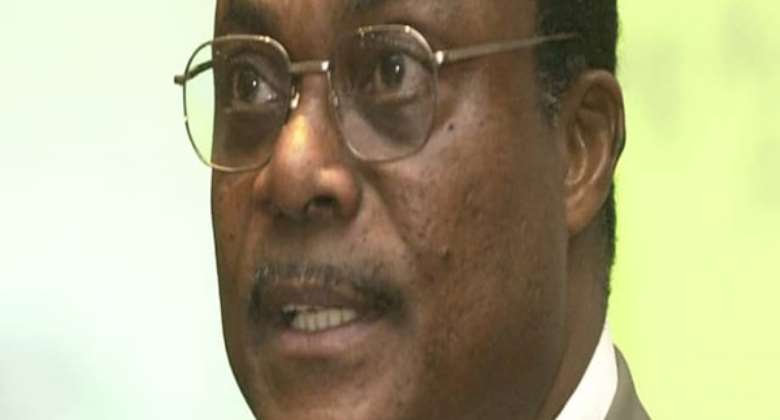 A private memorial service has been held at the home of Major Courage E. K Quashigah (Rtd) after a decade of his demise in Israel on January 5, 2010.

Major Courage E. K Quashigah was one time Ghana’s Minister for Food and Agriculture and later Minister of Health during the regime of former President John Agyekum Kufuor. He is also noted to be one of the extraordinary Military Officers Ghana has produced.

The ceremony was witnessed by the wife, Gertrude Quashigah who is currently the National Coordinator of the Ghana School Feeding Programme, his Children, Family, Friends, the Clergy and some members of the New Patriotic Party.

Amongst some important personalities in attendance included the Minister for Sanitation and Water Resources, Cecilia Abena Dapaah; the Deputy Minister of Information, Pius Enam Hadzide; the Director of the Danquah Institute, Mr. Richard Ahiagbah and the former Minister of Education and the Chair of Ghana Gas Company Limited, Mrs. Christine Churcher.

Several statements were made to eulogise Major Courage E. K Quashigah as one of Ghana’s finest Ministers of State whose contributions to the New Patriotic Party, Ghana and Africa in the area of Quality Leadership and Governance, Food Security and Preventive Health will ever stand the test of time.

In a remark, Mrs. Gertrude Quashigah stated that several events have been outlined to commemorate the 10th Anniversary of Major Courage E. K Quashigah throughout the year.

Born on September 9, 1947, at Kedzi in the Volta Region and was educated from 1962 to 69 at the Keta Secondary School for his G.C.E. 'O' & 'A' LEVEL Certificates. Enrolled in the University of Ghana in 1969 but quitted and opted to join the Ghana Military Academy.

After nine months of training, he was selected on merit to training at Royal Military Academy, Sandhurst (RMAS) UK, in 1970 where he graduated as a Second Lieutenant in 1972 with an Academic Diploma in Economics, War and Communication Studies.

His exceptional distinction won him the Prince Abdul Faisal Award for War Studies and a Cane and Certificate of Honour for being the Best Overseas Cadet and Highest In The Order Of Merit.

Between 1978 and 89 he studied and trained at the Ghana Armed Forces Command and Staff College in 1989, psc, where he was also named the Everand Award For Oratory And Presentation recipient; Canadian Land Forces Command and Staff College, Canada in 1987, plsc; Canadian Staff School, Canada, 1987, jsc where he was described as an officer with exceptional leadership qualities and his power of oratory was highly commended upon.

In the United States Infantry Schools, USAIS, United States in 1978 he emerged as the Distinguished Honour Graduate Ranger for being the Best Student on the America Ranger and Paratrooper Course in global history in competition with 146 Americans.

In 1980, he was presented with Commendation for Efficient and Effective Command during Peacekeeping Operations in Lebanon (UNIFIL) from General Emmanuel Erskine, Forces Commander and Commendation for Excellent Performance on the Canadian Staff Course by the late General Mensah Wood, Ghana's former Army Commander, in 1981.

His working experience dates back from 1978 when he served as the Intelligence Officer at the Headquarters of the Second Infantry Brigade, Kumasi; Chief Instructor of the Jungle Warfare School, Achiase; Chief Operations Officer at the Provisional National Defence Council (PNDC) Headquarters; Commanding Officer of the Ghana Military Police; Commanding Officer of the Force Reserve Battalion; Directing Staff at the Military Academy and Training School and Member of the Police Council.

After Military Service he had a stint at the Ghana Institute of Management and Public Administration (GIMPA) and graduated with a Certificate in General Management. Later he excelled in a workshop in Civil Society and Local Government in Germany organized by the Frederick Neumann Foundation. The Frederick Neumann Foundation invited back to Germany to train in Political Strategy Planning.

In 1992, Major Courage Quashigah (Rtd.) joined the New Patriotic Party (NPP) and was made a Member of the Publicity and Organization Committees from 1994 - 96 to canvas for support to contest in the 1996 elections. With such a resounding victory, he was appointed Minister for Food & Agriculture from 2001 - 2005 by the President Kuffuor's Administration. An appointment he had little knowledge about.

However, for the first time in many years, Ghanaians experienced abundant food supply all year round thereby ensuring food security. In the year 2003, he was crowned as both the Personality and Minister of the Year. When the NPP was re-elected for the second term of office, he was re-appointed Minister for Health in February 2005.

Initiatives such as Regenerative Health and Nutrition Programme are some of his landmarks that are aimed at promoting healthy living, long life and “Creating Wealth through health”. His notable performance as a statesman made President Kufuor confer on him the Order of the Star of the Volta, Companion Division.