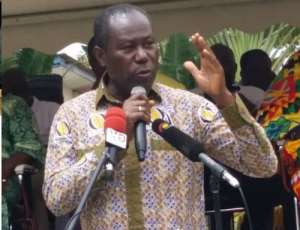 When I listened to Mr. Joseph Boahene Aidoo, the Chief Executive Officer of the COCOBOD and former in the President Kufuor's administration, under whom I worked as a District Chief Executive for Ahanta West District, on Kwame Sefa Kaye's Kokrokoo last Tuesday, I understood why my grandparents broke their backs as cocoa farmers in now Upper Denkyira East, Imbraim to be specific, and still died poor people. My grandfather had retired from the then Ghana Railways, Ports and Harbours as a headman.

Growing up in Takoradi, they had moved to Imbraim to acquire huge portions of land for farming purposes focusing on cocoa production. I saw cocoa plant for the first time in my life when I joined them later in my life on their farms. At the time, they planted what they called Tetteh Quarshie, a name I had heard in my Geography studies at the primary school for introducing cocoa beans to Ghana from Fernando Po, wherever it was or is. I learnt at the time that it took between six and eight years for the crop to mature and start bearing fruits.

I saw my grandparents working very hard on their cocoa farms but I did not see them harvesting as much cocoa beans as other farmers in the area. They would be complaining about the low yield each year even though I saw them applying fertilizer, spraying the cocoa trees regularly and doing the regular pruning of the trees. The only inhibiting factor in their toils was that the soil was not good enough for cocoa trees.

Long after they were gone, my cousins decided to cultivate oil palm on the same land which did not produce the desired cocoa for my grandparents and the yield from the farms are amazing. My grandparents did not know. Wasted time, resources and energy. Indeed, if they wanted to cultivate oil palm, they would have done much better staying in Ahanta and cultivating oil palm since the soil, rainfall pattern and the general climate is very much conducive for oil palm cultivation. For those who do not know, the first-ever industrial oil palm processing mill in this country was in a village called Sese in the Ahanta West Municipality. Pay a visit to the place and the old structure, including housing for the workers at the time, are still there in their dilapidated forms, though.

Cocoa as a single crop has carried this country on its shoulders for almost 200 years. The Cocoa Research Institute has over the decades improved cocoa seeds and seedlings and reduced the eight-year maturity period to four and three years. I heard Mr. Boahene Aidoo saying two-and-a-half years as of now. As the researchers improve the seedlings, governments did very little by way of direct support to the farmers in cocoa production except the provision of fertilizers at subsidized rates.

Poor economic conditions eroded the incomes of cocoa farmers as they aged along, the youth shied away from cocoa production in search of non-existent white collar jobs in the urban and peri-urban environments. The nation's export volumes declined and at a point in time came as low as 300,000 metric tonnes. A nation which had been the world's leading producer of cocoa dropped to the third place with time as a result of neglect and ageing farmhands.

It was not until President Kufuor assumed office that he introduced the free cocoa spraying for the farmers and other such interventions as tungya system championed by Mr. Abraham Odoom, then a minister in the Kufuor administration and now a Member of Parliament for Twifo Praso, that the nation almost doubled its cocoa production to about 800,000 metric tonnes. The target of the Kufuor administration was to hit 1,000,000 metric tonnes within a stated time period.

When crude oil was discovered in commercial quantities, once again under the Kufuor administration, this nation was cautioned against depending on the oil and abandoning other traditional export produce and commodities so as to avoid the Dutch disease. Just nearby, Nigerians abandoned groundnut production and exports as well as oil palm on finding huge reserves of crude oil. They suffered major economic setbacks with not too friendly oil prices and not too reliable export produce to support the dwindling oil incomes. In recent times, the Nigerians have gone back to pick themselves up and are doing very well with cocoa production, using Ghanaian expertise in some cases.

Another great policy of the Boahene Aidoo's COCOBOD, I gathered in his interview on Kokrokoo, is the fact that weedicides are no longer going to be used to clear the weeds on cocoa farms. As a child working on my grandparents' cocoa farm, one could pick huge snails, mushrooms, a kind of species of yams that grow under cocoa farms called locally as cocoa ase bayerɛ. These were natural bonuses to the cocoa farmers since they were sources of food to the farmers and in some cases incomes, depending on the volumes that were picked from the farms. As soon as the weedicides were introduced, all of these were killed. The new creative policies are based on practical observations and research.

One of the policies included in the US$600, 000,000 loan for the cocoa sector is the US$7million component meant to promote the consumption of cocoa-related products, including chocolate. It has generated a lot of controversies. How many of us in this country consume anything made out of cocoa? How many of our children eat chocolate whose primary raw material is cocoa?

I remember during Prime Minister Kofi Abrefa Busia's era, all primary school children nationwide were given free chocolates, particularly during Independence Days. I enjoyed it. But in this instance as I heard Mr.Boahene Aidoo, the amount is to be used to promote cocoa-related products locally for us as a people to appreciate that there are some benefits in the consumption of products from cocoa. And should there be a problem with that?

I heard one broadcaster asking about the returns on such expenditure and I was shocked about the fickle-mindedness of some of my colleagues. Why do manufacturers or service providers spend millions promoting their products or services? Do they get the returns immediately? Promoting cocoa-related products over time, all things been equal, will draw the attention of the 30 million Ghanaians to benefits of what we have locally, and once most of us start patronizing cocoa-related products, that will increase revenues in the cocoa sector. That is how all commercial activities begin.

Do we think that those who purchase our raw beans and transform them into readily consumables have no benefits from the cocoa, else why would they spend billions on them?

This is the time for us to appreciate and consume what we produce in abundance instead of depending on the consumption of it by others for us to raise the monies for our needs. Replace cocoa with coffee or tea in your everyday life, and we will save foreign exchange. DRINK COCOA, ENJOY COCOA should be the catch phrase.