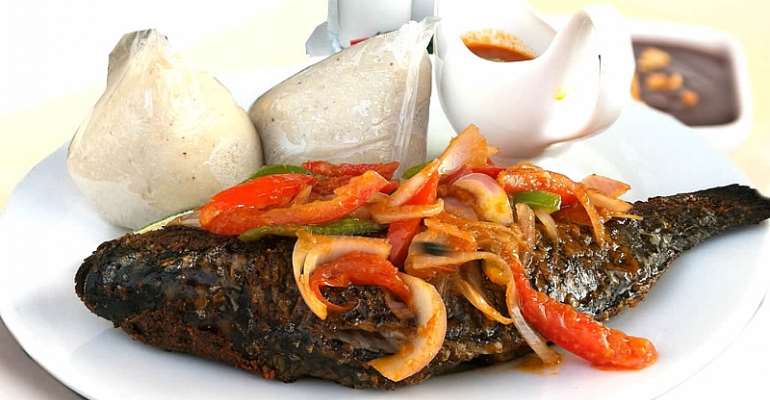 Ghanaians who are not Eʋes, or lived in Eʋeland, and Eʋes who were not born in their homeland are confused about what food we refer to as Akplẽ. Many people call it whatever they thought was the right name, this piece is meant to address that once and for all and to throw more light on how the different akplẽs are prepared.

Akplẽ in the Eʋe language is a generic name for any food prepared in a pot on fire either by using flour of different kinds or dough (usually cassava or corn) and stirred vigorously to form a soft solid poultice. The name of the preparation is preceded by whatever flour or dough that was used and then followed by kplẽ. For example: Ewɔ-kplẽ, Dzen-kplẽ, Amɔ-kplẽ, Kokonte -kplẽ. These are the original forms of akplẽ but latter additions don’t follow the same pattern, eg. Wɔdeme; which is prepared by combining cassava dough and corn flour.

EWƆ-KPLẼ
It is prepared by first, mixing a small quantity of corn flour to cold water and mashed with the hand or ladle till a smooth mixture is obtained. The mixture is then brought to a boil and stir for about five to ten minutes, depending on the quantity. After a smooth light pudding is formed, more corn flour is added to the pudding in bits while stirring till a smooth poultice is formed; how soft one wants it determines the quantity of flour that is added but it is usually very soft. This type of akplẽ is very light compared to amɔkplẽ also known as banku. Before the corn flour is added to the boil, some of the light porridge/pudding should be fetched aside so that when the flour is added and the mixture become too thick or hard, it would then be added soften, using cold water will damage the wɔkplẽ.

Ewɔkplẽ or simply wɔkplẽ traditionally, is eaten with aborbi tadi; they would usually make a gap on top of the wɔkplẽ. Dzomi (palm oil, the tasty one with the base) is heated with some chopped onions tossed in and stir fried for about a minute and the hot oil together with the onions is poured into the gap; as one eats, normally in group the oil flows along the sides of the wɔkplẽ and gives it a nice taste. This way of eating the delicious meal is virtually extinct as people now adopt many different approaches to eating it.

WƆDEME
Wɔ in Eʋe mean flour. Now wɔdeme is prepared in two ways, the first one is just mashing your cassava dough to a smooth mash and then adding your corn flour after straining the cassava dough mash with colander. The mixture is then transferred into a sauce pan and stirred on fire gently till ‘banku’ is formed. The thicker it gets the more difficult it is to stir. One could add water in small quantities gradually and allow it to boil under low heat as it cooks till a preferred texture is attained. This is served with Ademɛ soup with salmon, kpanla, herrings, adjeador or any choice of fish or meat but one should not forget to add ‘gboma’ to the ademɛ. Wɔdeme is lighter than amɔkplẽ (banku) so could be eaten at any time of the day just like wɔkplẽ.

The second method is only different in the way the corn flour and the cassava dough is prepared. The fresh cassava is first peeled and chopped into small cubes or slices, washed and dried in the sun for about 2-3 hours on a sunny day. This is done to reduce the moisture in the cassava. One then soaks dried corn in water, preferably warm water to attain quick result. The corn is soaked for about 3 – 4 hours (it must not be allowed to ferment). After that the soaked corn is scooped from the water and mixed with the cassava chops and milled together after which a small quantity of water is added to mix it into dough. There might be a slight fermentation but not like fermented cassava/corn dough. One could then mash the paste smoothly and stir just like in the case of the first method.

AMƆKPLẼ (BANKU)
This type of akplẽ is wildly prepared in Ghana but for the sake of non-Ghanaians, I will elaborate on the method a little.

You don’t have to make your own dough because it is sold everywhere in the markets. After getting your dough, mash the cassava dough first to a smooth paste, strain with colander if you feel cassava particles on the tips of your fingers as you mash. After getting a fine paste, add the corn dough and mash till smooth. Add water intermittently to reduce the thickness as desired. The paste is then brought to the boil and stirred till your banku is ready. Banku is eaten with grounded chilli and grilled tilapia or with okro stew/soup and chevon, beef, chicken etc or with groundnut (peanut butter) soup or palm soup.

KOKONTE KPLẼ
Kokonte is sundried cassava; this is grounded into flour (kokonte flour). First fetch a litre of water into a sauce pan and bring to the boil till water boils over. Add kokonte flour to the boiling water in small quantities while using the second hand to stir vigorously till a uniform mix and texture is attained, if one does not stir well, it may form small lumps. Lower the fire and keep stirring; cover the saucepan after five minutes and allow it to simmer. Dish out into soup bowls and serve. This preparation may be enough for two people or three people. To prepare for a larger number, one has to increase the quantity of water.

It is advisable to boil more than the quantity of water required so that if your mixture becomes too thick or hard for you, then you can add some of the boiled water to soften it, using cold water may damage your kokontekplẽ. This type of akplẽ goes well with any type of soup, but Eʋes, Adas and the Krobos are known to eat it with grounded chili and tilapia or any other fish, beside the numerous other soups that they eat it with.