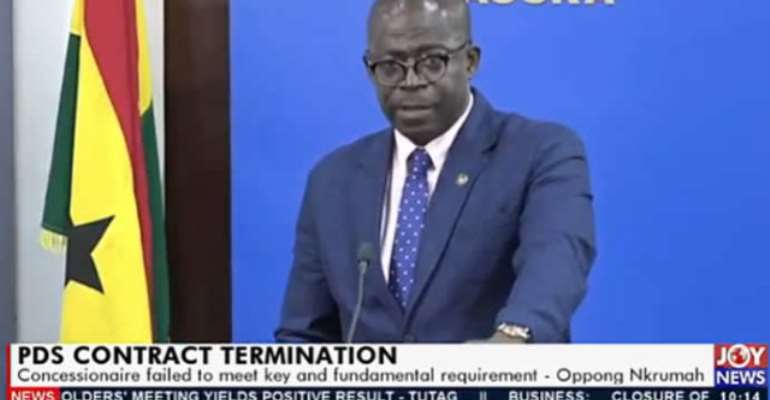 William Owuraku Aidoo is the Deputy Minister of Energy in charge of Power. He is also the NPP MP for Afigya Kwabre South

Deputy Energy Minister William Owuraku Aidoo says government deserves commendations for not caving in to “pressures” from the US government in the PDS saga.

The US government had given Ghana a deadline to sign an agreement with an electricity distribution company, Power Distributions Services (PDS).

But even before the October 31st deadline, government announced it had terminated its concession agreement with PDS following its failure to prove its financial capacity to manage ECG.

The US government after expressing regret at government’s “unwarranted” decision has said Ghana is set to lose out on $190 million as part of the Millennium Challenge Corporation (MCC) compact with the government.

The money is part of US support to help Ghana resolve debt-ridden energy sector which from time to time triggers power-cuts.

The deputy Energy minister said at a press conference Wednesday, the PDS deal was not in the interest of the Ghanaian people.

The Akufo-Addo government, he said took “a very bold step without capitulating to the pressures of a very big friend like the US.”

This is not the first time, the Akufo-Addo government has stood its ground against the United States, William Owuraku Aidoo said.

He said the US government has applied some sanctions against Ghana following the government’s refusal to accept the deportation of some Ghanaians living there.

“The US has not given visas to some government officials,” he said and added, “we have paid the price.”

The Deputy Minister said that refusal was the right thing to do and called for the government to be commended.