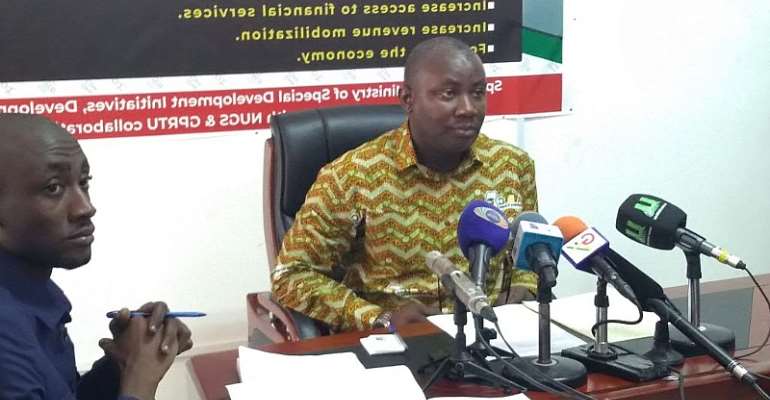 Dr Ibrahim(right) addressing the media at the programme

About 11,000 trainees under the Nation Builders Corp (NABCO) scheme have completed the programme over the past year with majority being retained at their placement centres within the public sector.

Others have also exited the programme to set themselves up as entrepreneurs in various sectors, while the rest have left the programme for career focused learning.

The Chief Executive Officer (CEO) of NABCO, Dr Anyars Ibrahim, gave the information when he addressed Journalists at a press briefing in Accra – to outline activities for the first anniversary celebration of the organisation.

“If you look at the recent recruitment at the Ghana Education Service, a chunk of those under Educate Ghana got placed. If you also look at the Ministry Of Food And Agriculture recruitment for extension officers, we had a lot of our trainees gaining employment” he said.

It is expected that the President of Ghana, Nana Akufo-Addo, will on Thursday October 17, 2019 mark the first anniversary of the programme with the launch of a learning platform for trainees called the NABCO Skills and Talent Academy (NSTA) pathways.

The mandatory programme, which will be a requirement for exit certification of trainees, is to be executed in partnership with the Ghana-India Kofi Annan Centre of Excellence in Information Communication and Technology (ICT).

It formed part of the learning component of the NABCO programme that sought to provide trainees with additional skills in ICT after securing job placements.

Dr Ibrahim explained that the NSTA pathway which has a total of 60 courses would comprise of two levels; where 70 per cent of the learning at one level would be done virtually and 30 per cent at another level would be carried out via one on one session.

“This is in recognition of communities that are having difficulty in accessing content due to variations in internet provision. We have designated learning centres which are physical spaces in all the regions” he said.

The Director General of the ICT centre, Kwasi Adu-Gyan, said that the lack of capacity to execute jobs among graduates has made it compelling for the institute to partner NABCO in bridging the demand gap for qualified workforce between academia and industry.

In a related development, the Greater Accra Regional Branch of NABCO held a durbar on Monday, to mark the one year anniversary of the programme.

The event was attended by some members of Parliament, Municipal Chief Executives, and representatives from the National Service Scheme, among others.

Also present was the Mayor of Accra, Mohammed Adjei Sowah, who urged trainees to work at improving their work ethics so as to contribute efficiently to nation building.

“Productivity must be measured not only in accordance with input of how much stipend you are given at the end of the month; but how much knowledge you have acquired and the attitude that you have changed” he said.