'We' Know That 'Lawyers' Are Overrated 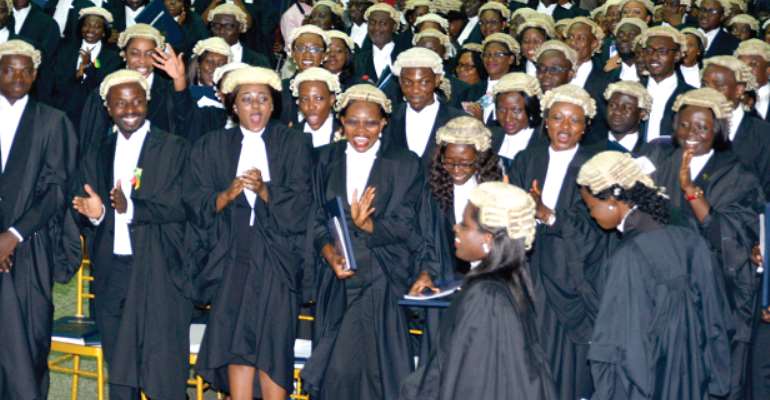 Respect to lawyers, respect to the countless readings and researches a lawyer has to do all his life after being called to the Bar, same respect I give to the teacher, same as I give to the Nurse, doctor or a mechanic, it is the same I accord lawyers because in truth, one doesn't need to have any special brain to be a lawyer. The bridge between students and Ghana School of law is not a thing of intellect, it is systemic.

We have about 3000 lawyers, of which 21 are at legal aid to serve millions of people who cannot afford the financial requirement between them and access to justice.

In proper representation, we have a lawyer to hundred thousand citizens ratio.

We have simple civil cases dragging on for years because of so many burdens on lawyers. Once you go through the legal system, you are less likely to seek justice at the court because it is stressful for everyone involved. Same lawyer handling a case in Accra has appointments in three other regions. Due to the oversubscription of lawyers, most of them who are qualified to be judges don’t want to be judges because they make more as lawyers. Being a judge is not attractive to most lawyers, this is the fact.

In spite of all these, we have decided to shut the door at countless people with the potential to succeed. Seriously, what is so special about law that these old men don't want people to get in, why shouldn't being a lawyer become as common as any other profession? Has the quality of healthcare reduced with the opening of the medical school? Has the quality of chartered accountancy reduced with the introduction of ACCA?

Why wouldn't access to justice be broadened to make justice not only available to the highest bidder but anyone who needs it like medical care?

Our Chief Justice has sworn to keep the door opened to a few people, she thinks it is the only way to presence the integrity of the profession. The many people who can't afford justice or get frustrated along the way of pursuing it doesn't matter to her.

We can't move forward as long as we rely on predominantly 'overused' brains for new brilliant ideas to move our nation forward. Interestingly, most of these people didn’t even do LLB, our president became a lawyer by apprenticeship and went ahead to be one of the finest in appeal. Unfortunately, those who got it on a silver platter are the very ones who put bricks along the way of those who aspire to get there.

The so called protection of the legal profession is borne out of selfishness and fear of competition.

There is nothing special about law, truth is, the myth around it is down to how we have limited the opportunities.

By so doing, we have made the LLB useless whereas in other jurisdictions, people have leveraged on that to become legal consultants. Why can’t we make it a 6 year course, why should everything be centred around Makola? Sometimes as a people, we have to change our way of doing things, think outside the box and find solutions to problems.

This year, Ghana School of Law took 450 Cedis from almost 1820 students for the entrance exams and passed only 128. To make matters worse, applicants were made to sign an undertaking during the registration that prevents them from challenging the results.

Of the 128 who passed, most of them will fail at the final exams that leads to being called to the bar, when you challenge such a result, you are suppose to pay 3000 cedis per paper for remarking. If this is not fraud, tell me what is.

Ghanaians become lawyers in the UK, some winning scholarships due to academic excellence come here, pay over 6000 pounds and most of them end up failing. This is the only country that teachers take delight in failing students. If they can meet the standards of the UK but failed to meet that of Ghana, then it is only logical to conclude that the mass failures is systemic

We have created a myth around law to create the impression that it is an area for a select few who possess special brains.

When victims decide to register their displeasure at such a bad treatment, you have some brainless policemen treating them like criminals.

Some country we live in.

More Article
Modern Ghana Links
Drums of war were beating for almost two years. Why Ethiopia's conflict was avoidable
The Nonsense of John Mahama’s Free SHS
Why Uganda must recognise nurses for more than a decade of HIV care
Nurses are playing a bigger role than ever in the fight against HIV – they deserve more support
Why it's important to keep diagnosing and treating HIV during the COVID-19 pandemic
Battles won – and lost – against AIDS hold valuable lessons for managing COVID-19
Managing HIV and diabetes together: South African patients tell their stories
How theatre can help young Nigerians who are living with HIV
Daytime sightings of elusive aardvarks hint at troubled times in the Kalahari
Dossiers Quotes Coronavirus
TOP STORIES