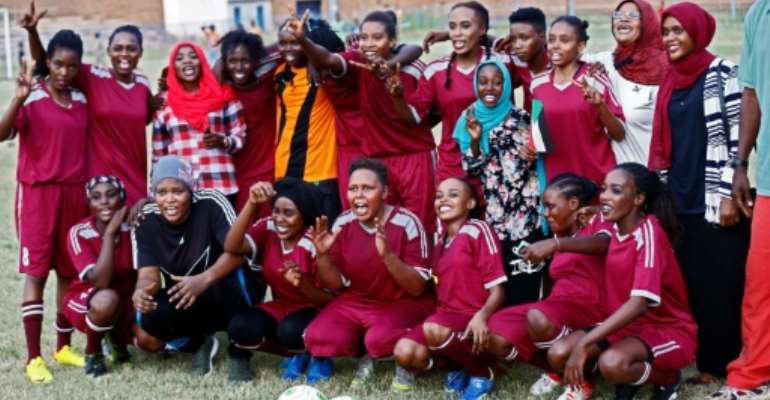 Women's football faced has faced an uphill battle in Sudan since the country adopted Islamic sharia law in 1983 but the country in September launched its first ever women football league. By ASHRAF SHAZLY (AFP/File)

Crowds rallied after Friday prayers in support of a hardline Islamist cleric who has slammed Sudan's new female sports minister for backing the country's first ever women's football league.

Sudan's women's football league held its first match on September 30 in the presence of the Minister of Sports Wala Essam and several foreign diplomats.

"We will give special attention to women's sport and women's football," Essam said at that time.

Youssef supporters rallied outside a mosque in south Khartoum where the cleric preaches, chanting slogans of support for him, an AFP correspondent said.

"We are with you Abdel Hay Youssef," chanted the crowds, an AFP correspondent said.

Supporters of a Sudanese hardline cleric opposed to women playing football rally in his support after Friday prayers in Khartoum, on October 11, 2019. By Ebrahim HAMID (AFP)

Some even called the cleric "Amir al-Muminin" (Arabic for "Commander of the Faithful)".

According to media reports, Youssef had links with Al-Qaeda and financed and trained fighters of the Islamic State group in Libya. He has denied these accusations.

Women's football has faced an uphill fight in Sudan since the country adopted Islamic sharia law in 1983, six years before Bashir had seized power in an Islamist-backed coup.

Bashir was ousted by the army in a palace coup on April 11 on the back of nationwide protests against his iron-fisted rule of three decades.

Islamist parties stayed on the sidelines during the protests while women played a central role.

A new joint civilian-military ruling body, called the sovereign council, is governing the country for a transition period of 39 months.

The launch of a women's football league came amid expectations that the transition period will see liberal policies implemented in Sudan, including measures to promote freedom of speech, women's rights, sport and arts.

Last year, Saudi Arabia allowed women to attend a football match for the first time ever in the conservative Muslim-ruled kingdom.

And on Thursday women attended a football match for the first time in decades in the Islamic republic of Iran.