The Vulture And The Little Girl 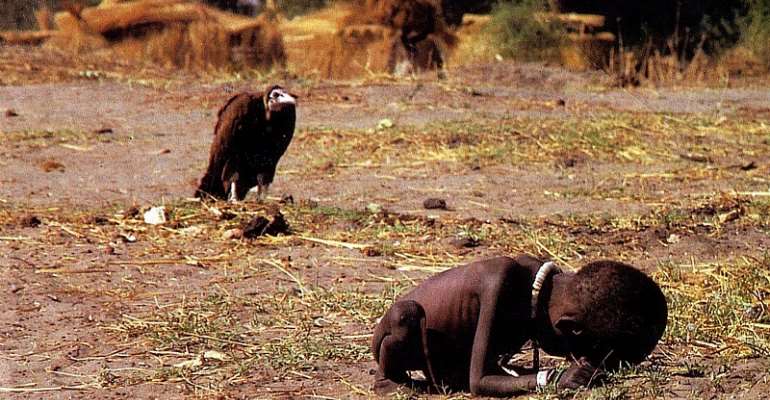 Kevin Carter was a South African Photo Journalist who made a name for himself in the early 90s due to captivating images he captured from the very core of violence across the Africa Continent.

He started with brutality of black South Africans during apartheid and later decided to spread his tentacles to violence meted out to blacks by their own compatriots in war zones.

Reporting for the New York Times and accredited as member of peace keeping teams to these locations, Carter and a group of friends, predominantly photojournalists who came to be known as the Bang Bang Club survived by working strictly under UN Peacekeeping rules They were not to interfere or even assist suffering victims. Their very survival depended on this.

In 1993, Kevin Captured an image of a young Sudanese girl who was on the verge of dying from famine. She was heading towards the UN Food Centre. Behind the girl stood a vulture, waiting to have her for food.

The image became a global hit and was received with mixed feeling, some people were very critical of Kevin because to them, Kevin acted inhumanely by focusing on capturing the girl instead of taking the pictures. He was condemned by man. During the phone-in segment of one interview he had on the issue, one caller said: the girl was between two vultures, one had a camera. Many international press did editorials to question Kevin's sense of compassion.

Kevin said at the time that he drove the vulture away after taking the picture.

Kevin had seen deaths, he had seen people being tortured, but through it all, he survived by obeying the rules, which firmly kicked against interfering.

Deep inside though, he was getting hurt by what he saw. However, what came to be known as the vulture and the little girl is what drove him craziest.

Around that same period, he lost his best friend who was also a photojournalist in the line of duty.

He got depressed and took to drugs.
Fast forward, Kevin won Pulitzer Awards for the Vulture and Little Girl's image. Challenged by the award to do more, Kevin went on another assignment to Mozambique, with the inner battles and striking images lingering on, Kevin returned from the assignment only to realize that the 16 films containing all he had worked on while away were missing. That was the height of his depression.

He drove to a park, connected a pipe hole to
his car's exhaust pipe and directed it into his car, he rolled up and died through carbon monoxide poisoning

He left behind the suicide note below
“I’m really, really sorry. The pain of life overrides the joy to the point that joy does not exist… I am depressed… without phone… money for rent … money for child support… money for debts… money!!!… I am haunted by the vivid memories of killings and corpses and anger and pain… of starving or wounded children, of trigger-happy madmen, often police, of killer executioners… I have gone to join Ken [recently deceased colleague Ken Oosterbroek] if I am that lucky”.

Some account are silent on what became of the fate of the little girl, others have it that she got rescued by the National Geographic Crew and died six years later from malaria.

What was rarely told was that Kevin's work brought attention to Sudan and sparked an influx of philanthropical supports to that country.

The little girl was one of many people in same situation, what was needed was a holistic support, Kevin's primary duty was to bring these to light to spark a reaction.

People assumed that he didn't care, but he was consumed by the images he saw. HE CARED AFTERALL

Today being a mental health day, with depression at the heart of it, we must take note of the fact that many people are dying of depression. No one gets up today to commit suicide, it is usually the closure people bring to longsuffering. We can help by being there, being less critical of people when they are wrong and most importantly, listen and judge less.

Carter was consumed by criticism borne out of the absence of knowledge on the rules of his profession and he had to pay the ultimate prize for it.

How may people am I 'driving into the grave'? Ask yourself this question and try to improve on your loveliness.

Add a little serenity to this chaotic world in your own small way.