Alleged Coup Plot: What So Far 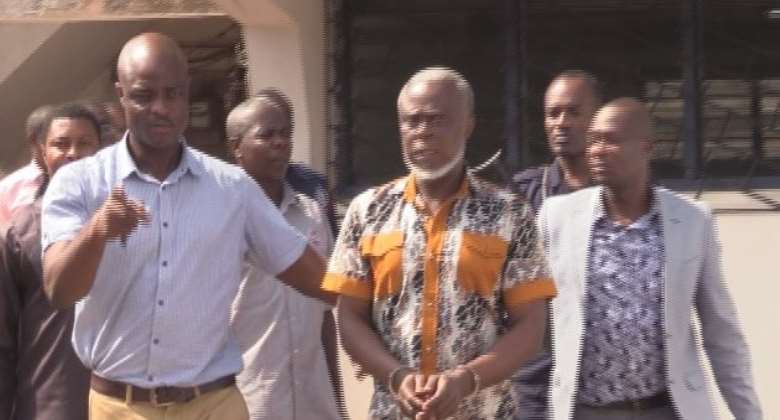 Dr. Frederick Mac-Palm along with two others, has been charged with five counts of conspiracy to commit the crime.

More details emerge on how three suspects being held for plotting what the government calls an elaborate plan to destabilise the country.

As government investigates three persons being held for crimes including unlawful possession and manufacture of explosives, details are emerging as to how the team was close to executing their alleged plan against the Presidency.

It has also emerged, several groups including market women and taxi drivers were recruited as part of the alleged plan to destabilise the country.

Although officials say they were plotting an elaborate attack on the Presidency, they have yet to be charged with treason.

In this report by Head of JoyNews Security Desk, Gifty Andoh Appiah, chronicles information available to us by our sources within the security agencies.

As it stands, Dr. Frederick Mac-Palm along with two others, has been charged with five counts of conspiracy to commit the crime.

As the investigations continue, JoyNews has gathered inside information from sources within the security agencies. What we know so far indicates, the doctor and a ring of people allegedly contacted a staff at the ammunition depo seeking 10 AK47 guns at a fee, GHâ‚µ7000 of which part payment was made.

1. They subsequently demanded a refund; a move our sources believe was either because the requested ammunitions could not be secured as scheduled or because they got the ammunition they wanted elsewhere.

2. Empty magazines were found and retrieved at the premises of citadel hospital. Investigative Assumptions by security agencies looking the matter are that, some of the guns may be hidden. They hope to unravel this as the investigations unravel

3. Government statement refers to a group formed by the alleged coup plotters called Take Action Ghana (TAG). Our security sources say, it is a cross-sector group consisting of students, market women, taxi drivers, people in academia, police officers, ex-servicemen as well as active military officers some of whom have already been picked up.

They add, these groups were being psyched to take action at an appointed time in various parts of country as part of the alleged plan to destabilise it.

4. it is unclear the specific number of active servicemen allegedly involved but at least 12 officers have been implicated although some were also used as informants to infiltrate several meetings which government says, were held by the arrested doctor and officers he recruited. There is also an alleged possibility he may have recruited other people who are off the radar at the moment.

6. We know, a stop list has been issued to the Ghana Immigration Service already to make sure that those connected to the matter, do not leave the country as investigations continue.

7. Sources corroborate government claims, recorded audio and video evidence exists as proof of government’s allegations and that, enough evidence was gathered as far back as July last year but arrests were not made to further monitor those involved.

9. They also tell us, the pictures being circulated, some of which are being used cynically and jokingly on social media, are about one percent of the entire story - which is why the government insists this is not a hoax.

10. Several questions have popped up as to why the three arrested were not charged with treason. The sources say the decision was taken on basis of the need to build a strong case for court, vis a vis the constitutional requirement not to keep them in custody for more than 48 hours. This we are told, informed the current charges which are equally grave offences.

12. The sale and purchase of the chemicals referred to by government’s initial statement are being seriously investigated as 22 Improvised Explosive Devices picked up from Dr Mac-Palm’s premises are also being tested to establish the components and the extent of damage they were built to cause.

Again, our sources within the security agencies say an initial profile of Dr Mac-Palm shows, he may hold radical thoughts against political systems and corruption and sought to spread same across his recruits.

15. Investigations should ascertain how he trained himself to, as alleged by the government, built the 22 IEDs.

16. Devices and other ammunitions allegedly found in his possession plus his ability to recruit several civilians and active military officers to execute the alleged plans present him as a dangerous person.

In the end, our sources indicate the team, whose leaders have now been arrested, have close to the tail end of the alleged operation hence the arrests and that the worse could have happened if those arrests were not made.

Investigations are however ongoing into the charges on unlawful possession of arms but as government has indicated, treason charges are imminent.