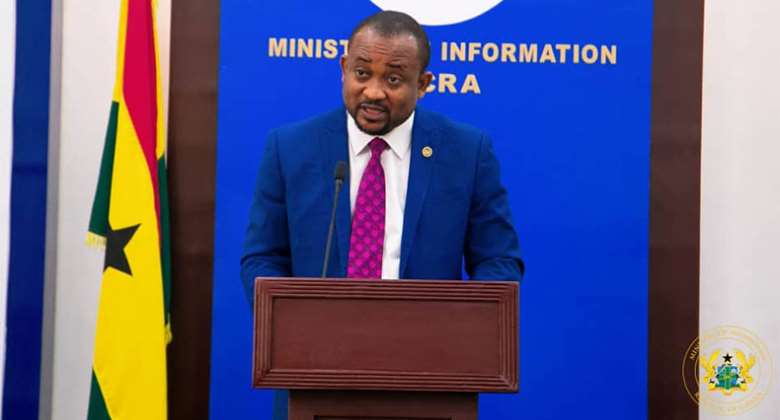 Government has warned security experts against ridiculing the plot to destabilize the country claims it made recently.

According to the Government, “it is unfortunate that sections of the Ghanaian public would attempt to ridicule this information.”

He noted that some so-called security experts have been taking to social and traditional media outlets to ridicule the coup d’etat claims.

The coup d’etat claim, he said, is a result of sustained surveillance including video evidence adding that the suspects had been plotting to target the presidency.

“And so we want to discourage strongly attempts by sections of our population, especially on social media and even sometimes in traditional media by self-acclaimed security and Intelligence experts to attempt to ridicule what information the Government has put out,” he said.

Mr. Hadzide referred to cases from the US to argue that it doesn’t have to be many people to assassinate a President.

Government on Monday, September 23, 2019 announced that security agencies have foiled a plan aimed at creating instability in the country and a takeover of political power through radicalization of the youth and the use of locally manufactured guns.

According to a statement signed by Kojo Oppong Nkrumah, Minister for information, the intended coup was prevented when a joint security personnel conducted a successful dawn operation which led to the arrest of three persons and the retrieval of several arms, explosive devices and ammunition from locations in Accra and Bawaleshie near Dodowa.

The joint operation which took place on Friday, 20th September 2019,

'was to neutralize an elaborate plot targeted at the Presidency, and with the ultimate aim of destabilizing the country.’

He said the arrest and seizure came after fifteen (15) months of surveillance and gathering of evidence on the activities of the prime suspects and others.

“Surveillance on the activities of the persons involved commenced in June 2018, when Dr. Mac-Palm and Bright Allan Debrah Ofosu (“BB” or “ADC”), started organizing a series of meetings at the Next-Door Beach Resort, in Teshie, and other locations in Accra, in furtherance of their objectives”, he said.

between June and August 2018, BB, acting for and on behalf of Dr. Mac Palm, contacted a number of serving military personnel, and talked them into hatching and executing a plot to obtain weapons, take over key installations, and secure funding for the purpose of taking over the reins of government.

Dr. Albert Sam (Based in the USA) formed a group called “Take Action Ghana” (TAG), under the guise of mobilising the youth for nationbuilding, education, health, and providing shelter to the needy. Evidence available shows the intent was to build a support base of youth, and radicalize them against the political authority in Ghana,” he stated.

The Information Minister said in furtherance of this scheme, Dr Mac-Palm contracted one Mr. Ezor from Alavanyo to produce locally made weapons and Improvised Explosive Devices (IEDs) for the operation.

“In July 2019, Ezor set up a workshop in a container, originally used as an X-Ray laboratory, at the premises of Citadel Hospital, and started producing the weapons and IEDs in-house,” he added.

Mr. Oppong Nkrumah indicated that on 10th September 2019, Dr. Mac-Palm and Ezor procured from the Korle Bu Teaching Hospital, some essential chemicals to be mixed with gun powder, stone chippings, surgical needles and powdered pepper for their operations.

He also contracted a worker at the Base Workshop in Burma Camp to supply 10 AK 47 riffles and made an advance payment of GH¢7,000.00.

“On Thursday, 19th September 2019, at about 2300 hours, still under surveillance, Dr. Mac-Palm, Ezor, and one soldier went to an area close to the Laboma Beach to test fire some of the locally manufactured weapons.

On the following day, 20th September 2019, between 0915 and 1755 hours, a team of security personnel undertook the operation which led to the arrest of Dr. Mac-Palm and his accomplices,” Mr. Oppong Nkrumah said.

He indicated that all the exhibits are currently in the custody of the BNI, whilst investigations are being carried out for further action.

Meanwhile, the suspects are undergoing interrogation.

He also assured the public that security agencies remain vigilant, and will work to safeguard national security and public safety.

“The public is encouraged to remain calm and advised to provide information on any suspicious persons or activities to the police for necessary action.