This Can’t Be A Coup — Brigadier Nunoo Mensah 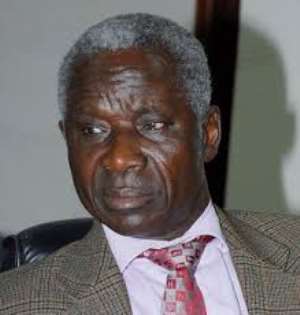 Brigadier – General (Rtd) Joseph Nunoo - Mensah, a former Chief of Defence Staff has said the recent alleged coup plot by persons targeted at the presidency can never be a coup de ‘tat.

“This cannot be coup de ‘tat, " he said this on Ahotor FM in a telephone interview.

According to him, the information put out by the Information Minister is very sad explaining "you cannot rush to put something out in the public domain you are not even sure of it."

He continued, “Are we playing with Ghana? For 62years we cannot build an expertise on how to run a government properly…”

Nunoo Mensah added that “…and I have seen plenty coup de ’tats, both in Ghana and abroad…I know what it takes to come and tell Ghanaians and the world that a coup has been staged…you don’t get up with a lot of information. You actually sit up and quietly, carefully sieve through the evidence and get what you want. You don’t have to rush and tell Ghanaians that there has been a coup attempt…”

His comment follows a recent statement by the Information Minister, Kojo Oppong Nkrumah on September 23, 2019 announcing that a comb ined team of security officers from the Defence Intelligence, Bureau of National Investigations (BNI) and the Criminal Investigation Department in their effort led to the arrest of three persons and the retrieval of several arms, explosive devices and ammunition from locations in Accra and Bawaleshie near Dodowa.

The arrest was made on September 20, 2019. The persons arrested were Dr. Frederick Yao Mac – Palm and his two accomplices namely Mr. Ezor Kafui and Mr. Bright Ofosu.

The statement partly read, “The arrest and seizure come after fifteen months of surveillance and gathering of evidence on the activities of the prime suspects and others.

Greedy and selfish appointees sending NPP into opposition — ...
6 minutes ago

Ghana’s biggest problem is our 1992 constitution — Koku Anyi...
6 minutes ago