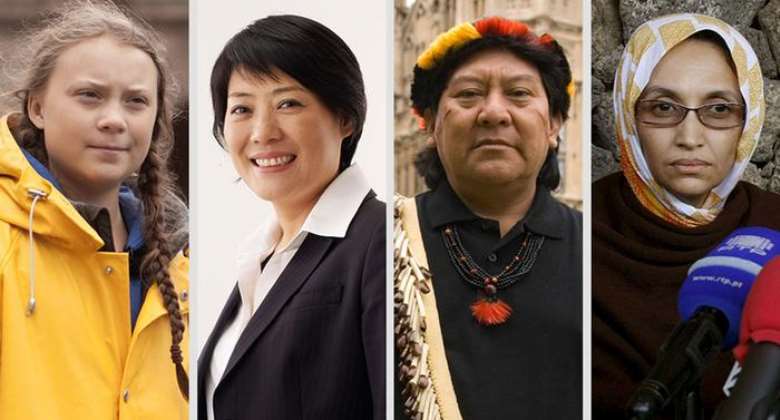 The Right Livelihood Award, widely known as the ‘Alternative Nobel Prize’, celebrates its 40th anniversary this year. Lawyer Guo Jianmei from China is one of the 2019 Laureates, the Right Livelihood Foundation announced today in Stockholm, Sweden.

Guo Jianmei is one of the most distinguished lawyers in the field of women’s rights in China. Throughout her career, she has helped thousands of disadvantaged women in getting access to justice. She is recognised by the international jury “for her pioneering and persistent work in securing women’s rights in China”.

Upon receiving the news, Guo Jianmei commented:
“This award recognises and acknowledges the efforts of my team and me to uphold women's rights and promote democracy and the rule of law in China, under difficult circumstances for the past 25 years. Currently, pro bono legal work in China is facing enormous challenges. To stand firm, we will need more passion, courage, perseverance and commitment. This award serves as an encouragement and motivation.”

The 2019 Right Livelihood Award Laureates were announced during a press conference at the International Press Centre at the Swedish Ministry for Foreign Affairs. The jury has selected four Laureates who will each receive 1 million SEK (94,000 EUR). The prize money is designated to support the Laureates’ work, it is not for personal use.

The other Laureates are the humans rights defender Aminatou Haidar (Western Sahara), the climate activist Greta Thunberg (Sweden) and the indigenous leader Davi Kopenawa who jointly receives the award with the Hutukara Yanomami Association (Brazil). The international jury considered 142 nominations from 59 countries, after an open nomination process.

“Guo Jianmei is a pioneer of women’s rights. She has provided legal support to thousands of Chinese women and demonstrated how the law can be used to successfully fight gender discrimination.”

Guo Jianmei consistently addresses gender bias in the justice system and helps raise gender awareness in China, a country with around 650 million women. She has founded and directed one of the most impactful non-government organisations for the protection of women’s rights. As China’s first public interest lawyer dedicated to providing legal aid on a full-time basis, Guo successfully introduced the concept of pro bono legal services for marginalised persons into the Chinese context. Since 1995, she and her team of lawyers have offered free legal counselling to more than 120,000 women all over China and have been involved in more than 4000 lawsuits to enforce women’s rights and advance gender equality.

Guo Jianmei’s work shines a spotlight on the state of women’s rights in China, where one in four married women has experienced some form of domestic violence at the hands of a husband, and gender discrimination at the workplace is rampant. Guo guides women through lawsuits and carries out legal advocacy at a national level on issues like unequal pay, sexual harassment, work contracts that prohibit pregnancies and forced early retirement without compensation. In rural China, where patriarchal attitudes are still deeply rooted, Guo provides legal support for women who have been denied their land rights. In 2005, she created the China Public Interest Lawyers Network that gathers more than 600 not-for-profit lawyers who can take up cases even in remote regions of China. Together with colleagues, she also provided a vast number of legal comments and research that led to the refinement and improvement of relevant laws and regulations.

In the face of a dramatically shrinking space for civil society in China, Guo Jianmei has shown courage and extraordinary resilience. Her work continues to impact the lives of millions of Chinese women.


Gou Jianmei will receive her prize at the 2019 Right Livelihood Award Celebration in Stockholm on 4 December. As the Award celebrates 40 years, the public is for the first time ever invited to participate in its presentation. Edward Snowden, who received the Right Livelihood Award in 2014, will join the celebration via link from Moscow and the artists José González and Ane Brun will perform at the event. Tickets for the Award Celebration are available via Cirkus.se.

The Swedish Right Livelihood Foundation presenting the Award sees its role as being the megaphone and shield for the Laureates and provides them with long-term support. It seeks to help protect those Award recipients whose life and liberty are in danger. The Foundation has Special Consultative Status with the UN Economic and Social Council.

Anyone can propose candidates to be considered for the Right Livelihood Award. The Laureates are selected by an international Jury after careful investigation by the Foundation’s research team. Unlike most other international prizes, the Right Livelihood Award has no categories. It recognises that, in striving to meet the challenges of today’s world, the most inspiring and remarkable work often defies any standard classification.

How it all began - The Nobel Foundation rejected an environmental prize

In 1979, the Swedish-German philanthropist and stamp collector Jakob von Uexkull turned to the Nobel Foundation with the proposal to create two new Nobel Prizes, one environmental award and one award to promote knowledge and perspectives of people in poor countries. To fund the prizes, he offered to sell his stamp collection, worth more than one million US Dollars, and donate the money to the Nobel Foundation.

Jakob was alarmed by the disconnect between the urgency of global problems and the way the international community was dealing with them. He saw how decision-makers were meeting behind closed doors, out of touch with reality. Activists and civil society organisations were at the same time gathering outside the meeting rooms, often presenting constructive solutions to the problems. But their proposals were not taken seriously, and Jakob wanted to do something about it.

"Whoever gets the Nobel Prize will be listened to,'' he thought and contacted the Nobel Foundation, which politely rejected the proposal to establish two new awards. There and then, Jakob decided to create the Right Livelihood Award to support people fighting for a just, peaceful and sustainable world. He went ahead and sold parts of the stamp collection, and that was how it all began. The Right Livelihood Award received a lot of attention when it was presented for the first time in 1980, one day before the Nobel Prize. Today, it is one of the most prestigious awards in sustainability, social justice and peace.

Income from the sale of stamps generated sufficient means to kick off the prize but ever since the Right Livelihood Award has been receiving its funding from private donors. A unique feature is that the Award comes with long-term support that includes networking and protection for Laureates under threat. Because of its founding history, it has come to be known as the 'Alternative Nobel Prize'.