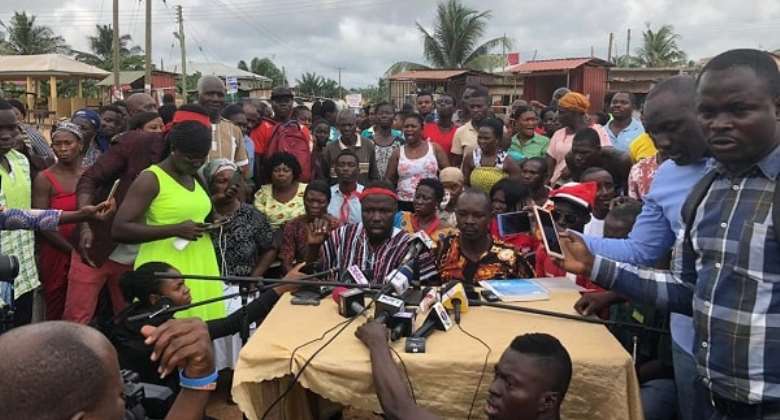 The three families said they could not trust the outcome of the DNA tests as announced by the Police Administration and, therefore, demanded the reopening of investigations into the case.

They completely objected to the declaration by the police that the skeletal remains found in a cesspit in Takoradi included those of their missing relatives.

The three are the families of Ruth Abakah, Priscilla Bentum and Ruth Love Quayson.

The press conference
At a press conference in Accra on Tuesday, the Spokesperson of the three families that rejected the findings, Mr Michael Grant Hayford, said aside from the telephone conversation the families had with the Director-General of the CID, what was known to the public pointed to the fact that the ladies were alive.

He said the CID boss openly stated that she knew where the girls were and that the police would do everything to bring them back.

Family and community members who attended the press conference were dressed in red and black to signify the seriousness they attached to the developments.

Mr Hayford said the posture of the police was not something the three families could trust.

“We were in the house yesterday when, after 7 p.m., the police arrived to inform us that the skeletons found were those of our children. How do we even develop the appetite to eat and even retire to bed with this pain?” he asked.

Mr Hayford said the families had expected the police to bring along a written report detailing the processes and what the findings were, but nothing like that happened.

He said it was unfortunate that the police did not even consider their plight and just threw the findings at them in the manner they did, saying: “Even if you go to hospital and the doctor demands a laboratory test, a report is given to the patient to present to the doctor for analysis. How come they did not do that?”

Anger in the communities
At Nkroful, Kansaworodo and Diabene where three of the girls lived, residents were in a state of shock concerning the outcome of the police investigations.

Some of them, in an angry mood, rained insults at a police patrol team that arrived in the town yesterday morning, continously hooting at the team until it withdrew.

Our culture
An elderly man, Egya Kojo, told the Daily Graphic: “In our African or Ghanaian diverse culture, there is a way of communicating such news to family members. Therefore, walking to the premises at night when people had not even had dinner and some had not returned from work was below the belt.”

Ruth Abaka’s grandfather, Mr Cobbinah Anzah, said his wife nearly collapsed when she heard the announcement of the outcome of the DNA tests.

At the residences of the Quaysons and the Bentums, they said the information came at a time some members were about to have their dinner.

“The police entered and just broke the news to us, which is unacceptable,” one of them said.