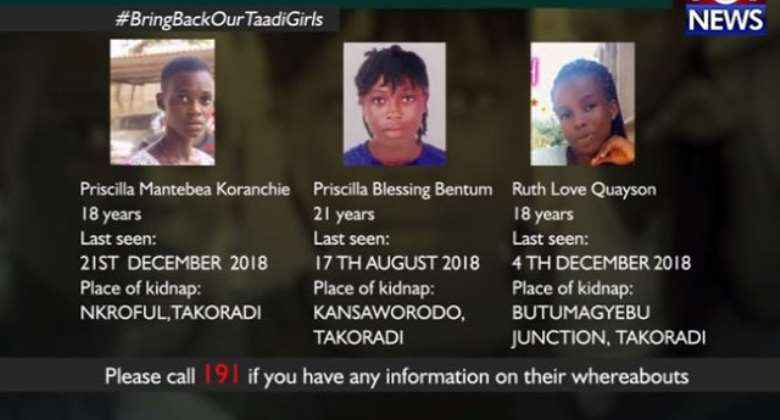 The families of the four Takpradi girls, who police say are now dead, have lashed out at the Service over what they describe as a poor job in investigating the disappearance of their daughters.

On Monday, the acting Inspector-General of Police, James Oppong-Boanuh, confirmed the death of the girls who went missing last year.

At a press conference in Accra, he revealed that the results of the DNA test conducted on the remains found in a cesspit in Takoradi, were indeed those of the four girls.

The girls, Priscilla Blessing Bentum, 21, Priscilla Mantebea Koranchie, 18; Ruth Love Quayeson 18, and Ruth Abeka were victims of a kidnapping and murdering syndicate in the Takoradi area, the IGP said.

The police boss bemoaned the inability of the service obtain “accurate and actionable intelligence” in “good time”. But he said the arrest of the alleged kidnappers has “effectively” thwarted the ability of the syndicate to continue their murderous spree.

But the families are livid.
Joy News’ Western regional correspondent, Ina-Thalia Quansah, was with them and reports that they are extremely disappointed at the manner in which the police handled the case.

Ruth Love Quayeson’s uncle described the revelations by the police as “concert”.

Obeng Tawiah said there is no way the families will accept the disclosure that has been made.

“I will never believe what they said, there is no truth in it. What shows that anything they said is true,” he queried.

He was astonished that the police who had informed them that the girls were alive and government was going to pay some monies required to bring them home, have now turned around to say they were dead

But the police are not the only people Tawiah is disappointed in. In his view, government, especially the President, Nana Addo Dankwa Akufo-Addo, has been unfair to the families.

He wondered why the President has, until now, not been able to visit the families but instead decided to go to Axim, where he assured government had not gone to sleep on the issue.

“The President and his people should advise themselves because everything shows that they are an untruthful bunch,” he said.

He insists that the girls are not dead and called on the police to do better.

For Phillip Osei Koranchie as disturbing as the revelations by the police are, there is not much the family can do but “give everything to Jehova God.”

He told Ina-Thalia it was sad to learn that Priscilla Mantebea Koranchie has died but “they will take the news as we have received it.”

“It hurts but we are consoled by the word of God. There is not much we can do now,” he added.

We can't wait any longer – CLOGSAG to embark on nationwide s...
15 minutes ago

Nat Nuno Amarteifio, former Mayor of Accra to be buried on F...
15 minutes ago