Katanga, Which Tradition Is That? 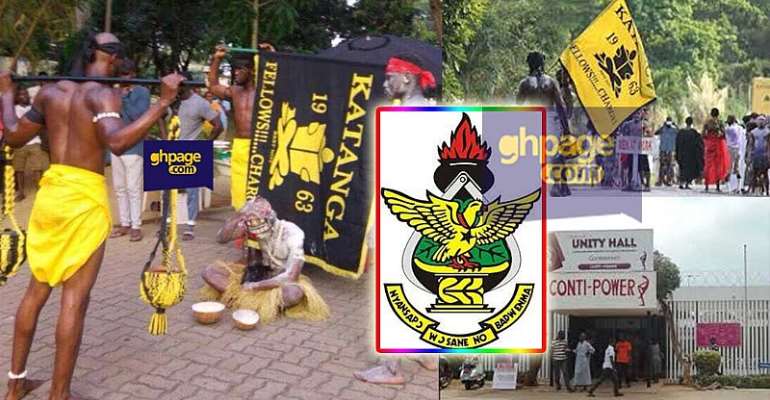 One test for the quality of educated is improvement or development of the educated and their society. CHANGE is an attribute of improvement/development, so by inference, they who are afraid of change could be afraid of improvement/development. The resistance of students of the University Hall (Katanga) of the University of Science and Technology (KNUST) nicknamed (Tek) for the inclusion of female students in their residential hall is unfortunate. Equally unfortunate is the students’ strong attachment of some “Tradition”, that cannot be anything more than having a majority youthful population since opening in 1961.

Let us appraise the origin and reason behind the nickname “Katanga” for a better appreciation of the problem at hand. Katanga was named after the controversial and trending Katanga State/Province whose secession from Congo lasted only three years (1961-63). Ghanaians are noted for sarcasm, and the adoption of this name was no exception. I have never bothered to know the actual student or the exact date “Katanga” was adopted, but as with nicknames they start with the initial casual proposal/mockery accompanied by protestations, then it sticks with time.

The adoption of “Katanga” was more to sarcastically describe the marked ISOLATION of University Hall from all the other residential halls (Africa, Queen’s, Republic, Independence and Unity), including the important Commercial Area and the Tek Junction to go to town. Otherwise a state that lasted for only three years would not have been one that educated people would proudly identify with, even if youthful exuberances match some aspects of secession.

Where in this seclusion/isolation do we find any “tradition” that will justify the rejection of women as hall mates in 2018? Or was it reported anywhere that the Katanga Province was anti-women even if copying from the name source was the idea? And if YOUTHFULNESS is the real tradition and therefore the concern of the Katangees, then let them say so.

And if so, then their rejection alongside some Conti students of their female counterparts into residence is not very sound because the “youth” everywhere includes females. After all, in this era of gender activism some females are motivated enough to match and even outperform their male counterparts as Nana Yaa Asantewaa did (in Ashanti history) did. Is this what Katangees are scared of?

For the "isolation" of Katanga consider the extra distance they had to cover when colleagues branched to enter their halls, that could be perceived as a bit unfair! However the University Administration also made it a convention to allocate more of the youthful students with their youthful energies to Katanga; so if there is any tradition to see here, it will be the youthful students. It is indisputable though that a hall of youths would exhibit youthful exuberance, but that is where one’s tertiary education should guide their appropriate choices.

As hinted above, change is all there is to life, and anyone who is not comfortable will be anachronistic, and a university being the pinnacle of knowledge acquisition is the last entity expected to be stuck in its past for the sake of traditions. Apparently there has been a lot of changes both in academics and social life at KNUST since it was founded, one of which being this mixed hall arrangement, and more changes will continue to be made as and when necessary, after the necessary consultations and notification are done.

The early days of KNUST saw a small over-pampered students life with single rooms, free services and pocket allowance etc to boot. Changes over the years have turned the freebies and pampering to study loans, pairing and now pairing-perching, non-residential status etc, because of increased population. Apparently in the Ghanaian situation where the rate of population growth far outpaces provision of social amenities, vis-a-vis the governments’ commitment to educate all citizens, the comforts that university students enjoy would continue to suffer.

Of course, holding on to traditions or choosing to be conservative is anybody’s prerogative so could be as passionate about them as one wants. However those personal choices cannot and should not be at the expense of the right of others, in this case, female students of KNUST assigned to Katanga as their hall of residence, to facilitate their studies. Somehow it is both interesting and mind-boggling that these same female students who have been faculty colleagues, mixing and competing fairly in the lecture halls and in societies/associations cannot be acceptable in the halls of residence! Are our sisters and other women in the homes and workplaces an impediment or discomfort to men in those homes/offices? If not, then why can’t Katangees be comfortable with female students in their hall as other halls in same KNUST have shown! No, reconsider this hold up, Katanga in particular, and Conti.

Apart from Africa hall, all other halls have originally male halls, but the mixed hall arrangement had to be introduced and implemented because of the unfortunate interplay of governments' budgetary constraints, increasing population, and increasing proportion of female education. Queen’s Hall was the first to have this mixed hall arrangement some forty years ago, and gradually it has extended to other halls of residence as and when the population of female students increased in proportion. This mixed-hall arrangement could still be the university’s policy even if more halls are built, since the gender integration and women empowerment campaign have become national policies. And would it not be better for its implementation and sustenance if future managers of the nation dealt with them as part of their education!

Students of University Hall in particular and Unity Hall have to come up with a more convincing reason for their opposition to the conversion of their all-male halls to a mixed one. The all-male “tradition” has been the original arrangement for all the five male halls until 1980/81 when it started changing because it had become necessary and it is not an unbreakable tradition. It is the turn now for University and Unity Halls to be mixed.

If these halls do not want to be perceived as lawless or stubborn, then let them shelve this resistance and rather receive the “sisters” and for example help prepare them for the rough, tough and risky jobs too after they graduate! Enough of their quest for decision-making positions and “soft and easy” jobs! Also a solidarity investment or development either in Katanga and Conti or anywhere on campus, or outside campus could raise the bar positively for them.

Let’s there be a peaceful and open-to-challenge academic life at KNUST and other educational institutions, as students try carrying same to working life after graduation.