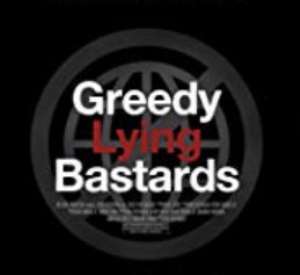 If there is one thing we have observed when a Ghanaian is spending or enjoying something which somebody else is going to pay for; the person does it with intense focus and strength like a lion devouring its prey. This is the area where most people tend to sell themselves short. They act wasteful because it's not on their account. Why this greedy attitude? Where is it from? whom did we learn that from? I also have observed that we accumulate more than we can spend and take more than we can eat when somebody else is paying for other than ourselves. Where from this selfish and greedy mentality?

Recently a party was organized by a “responsible” wealthy old Papa to honor old people in my area during the Father's Day, everything was set, the program had not commenced, yet you could see uninvited people who purposely came there to eat 'yelled' at the MC that the programme had taken long to commence. It was a buffet therefore the food was placed in an open area where the diners were to serve themselves. Assortment of food. The Pastor had not finished praying over the food and yet people started to fight over it.

I was there observing what was going on, one person wanted to taste everything with no regard to what the belly can take. He mixed the food in its excess quantity. I asked myself what at all does he want to do to his body? couldn't he had taken what he could eat and leave the remaining for others who will come later? A feast planned for about One hundred, and fifty people as I was told, only Ninety five people were present when the party started, yet those who lately reported were not fed because there was no food , everything had been devoured.

Why do we behave selfishly like that? is it because Africans have the notion that we are underfed, and this has eaten into our minds to the extend that we will grab any slight opportunity to fill the gap with our under nutrition? . I spotted a woman who after having eaten three (3) plates of different kind of meals and two bottles of Fanta, packed the remaining in one Ghana cedi polythene bag. What is she going to do with it at all? I asked myself. I realized that she was sending it to her children and probably her husband who couldn't attend the programme. I was surprised, did she plan her family supper with the party in mind? how many days can they live on that food? I realized that Some Ghanaians are notoriously terrible when it comes to gluttony and greediness .

Sometimes it's hard to believe these things. We are all guilty of this Wolfish attitude in one way or the other.

Why are we so eager to abuse free things? why do we want everything for ourselves and leave others to suffer without caring for them?

I must say, Some people irrationally behave with no doubt that their behavior goes against reasoning.

We send this 'I want it all for myself' attitude to our workplaces, into government offices, Banking Halls, and fact everywhere.

A government official who earns Seven thousand Ghana Cedis a month, free Land Cruiser with a driver, built own house and probably married to a beautiful lady or a hard-working Gentleman, has children attending good schools, and yet still not satisfied . They have enough, in fact enough that if they decide not to work again in their remaining years they would never be miserable.

They can use what they have now for the next fifty years to come, yet they wouldn't be in need of anything. Regardless of what they have, they still want to take that which is meant for the poor and needy in the society. So tell me if it is not Witchcraft what else could it be?

When would enough be enough? Some People have more than they can spend, yet they seem not to be content. This cannot be the insatiable nature of man I learnt in Economics, this is devilish, demonic and Greedy attitudes which need serious deliverance, Period! The little abuse of item 13, free things that we learnt in our early days have contributed to this 'madness'. Funerals have now become a dinner party instead of mourning,celebrating, respecting, sanctifying, or remembering the life of a person who has died. Some people even leave the funeral grounds very angry because they were not served. Like how?

At a funeral in a village with a population of Nine hundred (900) people, a funeral tribute books totaling about Two Thousand (2,000) which were to be shared to about Five Hundred (500) Sympathizers from neighbouring villages and for those coming from the Cities suddenly vanished, as was explained by a family member. He continued, If everybody in the village had attended the funeral , the family would still waste Six hundred (600) tribute books, but to their greatest disbelief, some people at the funeral could not get a copy, Whaaaat! Some people had taken two, three, four and five of the tribute books to send home as if that tribute book is the master copy that all family must look on to prepare their own tribute book.

The habitual greed or the desire to have excess of everything sometime makes us behave irrationally.

There was this student programme I attended when I was in the university. The auditorium was very calm, everybody was sober and gentle until the sharing of item 13 started, the whole place jammed up, though there was enough for everyone to eat but everyone wanted to get theirs first for the fear that they may not get. It's so pity isn't it? Those who share item13 at programmes suddenly become Lords, some exhibiting arrogant attitude just because they are in charge of the food. Item 13 has become a bait which is now used to catch student for a programme which is supposed to be for them. By the time you announce the programme, somebody at the back of the classroom will shout, item dey? When the respond is Yes, you could see smiles on their faces as if they have been promised a five-year stay in Los Angeles, although they are aware that they will be served with One cedi meat pie and Sobolo.

Until we stop this greedy, selfish attitude and change our wasteful nature when using free things, then people who move to the top will forever use whatever in their possession to amass wealth for themselves and wouldn't think of the poor. Some people attitudes in spending what others will pay for defies logic. Some are blissfully unaware of the negative impact that they have on those around them, and others seem to derive satisfaction from creating loss for others.

Gluttony and Greediness is not a Life that wins.