Violence And Protests In Refugee Camp, Greek Police Use Tear Gas Against Children 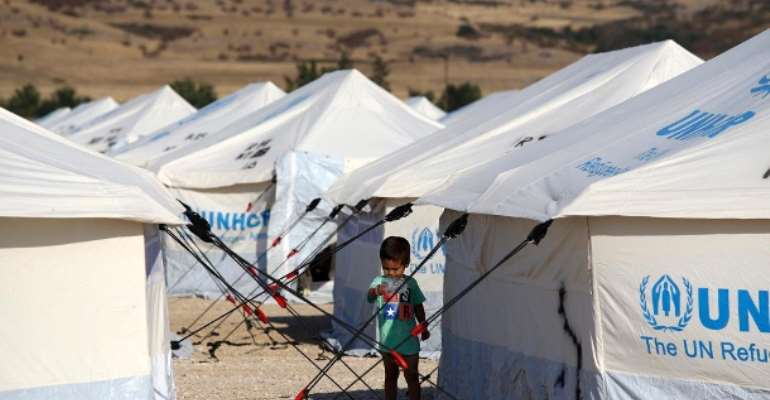 A child in a refugee camp in New Kavala-Greece

Around 1,500 asylum seekers have been transferred from the island of Lesbos to the mainland in Greece. The situation for many refugees on the Greek island of Lesbos is devastating. The migrant camp of Moria is bursting at the seams. Again and again there are violent riots. The police crack down hard.

The Greek police used tear gas against refugee children during protests in an overcrowded refugee camp on the island of Lesbos. The Greek news agency Ana reported that on Wednesday about 300 unaccompanied minors took part in protests in the infamous Moria camp and demanded their transfer to the mainland. When the refugees set garbage cans on fire, the police used tear gas.

The Moria camp has been under criticism for years because it is chronically overcrowded. After the arrival of 3,000 new refugees in August, the already difficult hygienic situation in the tent camp surrounded by olive groves deteriorated further. At the end of August, according to UN figures, almost 11,000 people were living in the camp, which is actually only designed for a quarter of them.

Many refugees have been living in Moria for months, as their asylum procedures are protracted. However, the new conservative government in Athens has now decided to abolish the possibility of appeal in order to speed up the proceedings.

Refugees to be transferred to the mainland
In the meantime, the EU Commission has offered Greece help with the transfer of refugees from Lesbos. On Tuesday, the Greek authorities transferred the first thousand refugees from Moria to the mainland. They were taken by ferry first to the port of Thessaloniki and then to the Nea Kavala camp near Kilkis in northern Greece.

But even there the conditions are anything but optimal. New arrivals complained on Wednesday about bottlenecks in water, electricity and tents. "We left Moria hoping for something better," said 20-year-old Sasan from Afghanistan. "Ultimately, it's even worse.

According to the Greek Ministry of Civil Protection, there are currently only 200 tents in Nea Kavala for a thousand inhabitants. The next refugees from Moria will be taken to other camps.

In addition, the EU Commission is urging Greece to return more to Turkey. This emerges from a recent confidential report of the Commission on the Development of Migration, from which the "World" reported on Thursday.

The report states that the "speed of repatriation operations" from Greece to Turkey remains "alarmingly slow". "Effective returns require coordinated action by the Greek authorities (...)". This would include, for example, an "increase in final asylum decisions".

With regard to the situation on the Aegean islands, it says: "There is still an urgent need for action on the part of the Greek authorities, including a strategic approach to relieve the burden on the islands and increase repatriations".

At the request of the "world", the Commission stated that, despite the shortcomings, the situation was constantly improving thanks to improvements in infrastructure, transfers of vulnerable asylum seekers and the establishment of better reception and identification centres. Migration Commissioner Dimitris Avramopoulos is in close contact with the Greek authorities and the new government.

Turkey had promised the EU in the refugee deal of March 2016 to take back all rejected Syrian refugees from Greece in return for financial help in supplying the Syrians in the country. As a result, the number of crossings fell drastically. However, to date only a few refugees have been returned to Turkey from the Greek islands.