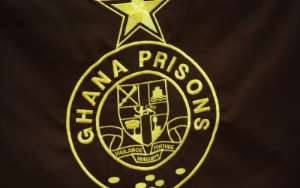 The Ghana Prisons Services has rubbished claims of maltreatment against Foreign inmates by one Emmanuel Emeka in a viral content.

The Nigerian national who is currently serving a total of 130 years sentence for separate robbery offences released a message with allegations of maltreatment and unfair treatment by prison officials towards foreign inmates with a smuggled mobile phone in 2016.

In a press statement signed by Daniel Machator, Deputy Superintendent of Prisons and Public relations officer stated that post the u lawful conduct of the said prisoner, "The Nigerian high commission was notified and further admonished by the commission to submit to prison rules",

The statement also noted that "He was also cautioned to avoid engaging in any acts that had the tendency of marrying the good diplomatic relations that exists between the two countries" adding that "Ghana's prison system like the wider Ghanaian society does not discriminate against foreigners.

The attention of the Central Regional Command of the Ghana Prisons Service has been drawn to allegations by one, Emmanuel Emeka, a prisoner, serving a 130 yrs IHL sentence at the Ankaful Maximum Security Prison detailing allegations of maltreatment and unfair treatment by prison officials. The Command comments as follows:

CP. Emmanuel Emeka, a Nigerian national, was first sentenced to two 25yrs IHL sentences for separate robbery offences on 25th October, 2008 to run consecutively by an Accra Circuit Court. On 2nd February 2010, he was sentenced to an additional 80yrs IHLfor another robbery offence resulting in a total sentence of 130yrs IHL.

Details of his viral message first came to the attention of the command in February 2016.He accepted responsibility for the message before the Regional Commanderstating that he did that with the help of a smuggled mobile device in his possession. The mobile phone was swiftly retrieved and disciplinary actions were instituted against him.

His conduct was reported to a delegation from the Nigerian High Commission who came on a routine visit to Nigerians serving at the facility. He was admonished by the team to submit to prison rules and regulations and not to engage in any acts that had the tendency of marring the good diplomatic relationship that exists between the two countries.

It is necessary for the general public to note that, Ghana’s prison system, like the wider Ghanaian society, does not discriminate against foreigners. All prisoners, irrespective of nationality, have the right to appeal. The Ghana Prisons Service, through paralegal staff, facilitate prisoner appeal processes. Negotiations for legal services for inmates are mostly initiated and sustained by relatives of incarcerated persons. The Ghana Prisons Service has no control over private legal practitioners.

On allegations that Nigerian offenders in Ghana are slapped with excessive sentences, all should note that, the prisoner serving the longest sentence in Ghana is a Ghanaian. The Ghana Prisons Service acts as the final player in Ghana’s criminal justice system by enforcing the orders of the court.

His allegations as regards rampant death of Nigerian nationals in Ghana’s prisons remain baseless untruths as the average general death rate of prisoners in Ghana has fluctuated between 0.20-0.30% of their total population for close to a decade now.

On ration served to inmates, the Service ensures that all prisoners are served with three meals daily. There is no occasion where inmates are served with gari without an accompanying sauce or soup.

Finally, the Command wishes to assure the general public that, the Ghana Prisons Service continues to work towards providing a safe and humane prison system that rids the society of criminal elements and also provide avenues for prisoner rehabilitation and reformation.