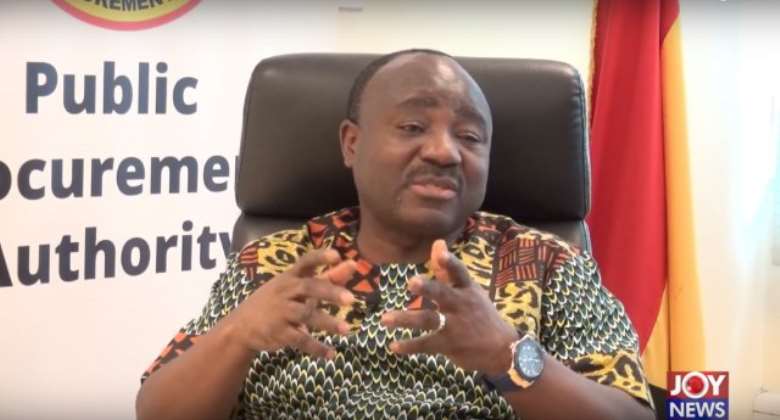 The Commission on Human Rights and Administrative Justice (CHRAJ) says it is ready to begin full probe into allegations of conflict of interest against the suspended Chief Executive of the Public Procurement Authority (PPA).

According to the Chairman of the Commission, Joseph Whittal, the case is not a tough one at all.”

He added: “We have done more detailed matters…and this is not a matter that CHRAJ will not crack.”

Whittal further assured that considering the huge public interest in the matter, CHRAJ will expedite its investigations.

Speaking to Emefa Apawu on Joy FM’s Top Story Monday, Whittal said CHRAJ has completed its initial assessment’s to determine that the case against the suspended CEO, Adjenim Boateng Adjei falls within their mandate.

“We have even found other issues of our mandate that are triggered as an administrative justice body,” he indicated.

According to him, CHRAJ will write to Adjei on Tuesday and per standard procedure, the suspended PPA boss is expected to respond in 10 days.

He said if Adjei concedes the allegations of conflict of interest against him, there would be no need for investigations, “however, if he denies then we will begin a full probe into the matter.”

Whittal added that even the further probe may be of greater benefit because then, it would reveal other persons implicated in the rot.

On Wednesday, investigative journalist Manasseh Azure Awuni premiered his ‘Contracts for Sale’ documentary in which a company jointly owned by the PPA boss and his relative bids for government contracts.

The company, Talent Discovery Limited was only incorporated in 2017 but has since won a lot of contracts. More disturbing, TDL does not execute the contracts but rather sells them to the highest bidder.

The contract, including road projects, remain unexecuted until a buyer comes.

The company, however, denied the allegations and said its general manager, who is at the forefront, acted on his own volition.