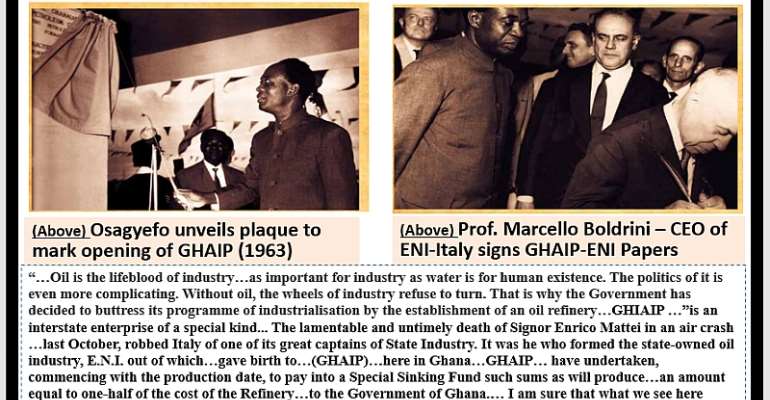 In Memory of the People of African Descent, “’20 and odd’ Angolans”, who, 400 years ago, on 19 August, 1619, set foot on the American shores at Point-Comfort, Virginia, as indentured servants, who, with their descendants and many, many more who followed, were soon made slaves and became the backbone and primary reason for a industrialized and “developed” United States of America globally known for the Statute of Liberty donated by France in 1865, 46 years later, after that landing.

INTRODUCTION:
Today, as President Nana Addo Dankwa Akufo-Addo still is on a publicly-funded Institutions Re-Naming Convention (IRC), practically a building re-naming agenda that has added not a pesewa, cent, or penny to the Ghana industrialization or development agenda for the benefit of the communities in which those institutions are located, and for Ghana as a whole, we are publishing a paper we’ve been wanting to publish for a mighty long time.

In partnership and in coordination with many other individuals in Ghana and in the Diaspora, our research on objective facts and conditions related to the overthrow in 1966 of Osagyefo Dr. Kwame Nkrumah and his CPP party, and the larger political, social, and economic history of Ghana, continues.

MESSAGE FOR PRESIDENT MACRON OF FRANCE & PRESIDENT TRUDEAU OF CANADA, AND THEIR COUNTRYMEN:

Just in case, Ghanaians and Ghana supporters reading this paper ought to know that many of the official records on the overthrow of Dr. Kwame Nkrumah have been de-classified and released to the public, and continue to be released. This is the case, especially with respect to the United States of America (USA), although from the nature of records already released, some significant records still remain – redacted/classified, if you will.

However, as far we can tell, not a single record has been released by the Governments of France and Canada, two countries also directly tied to the overthrow of Kwame Nkrumah, at that time the duly elected leader of the Republic of Ghana.

We ask that President Emmanuel Macron of France and President Justin Trudeau of Canada immediately order the release of the “Kwame-Nkrumah-Ghana-CPP Papers” held by their governments on the overthrow of Dr. Kwame Nkrumah of Ghana, today.

We are appealing to citizens in these 2 countries to also demand the release of the “Kwame-Nkrumah-Ghana-CPP Papers” so their citizens can also understand what their leaders did to cause the arrest of the development of Ghana starting in 1966, so they also may be better served by their own governments.

Incidentally, any conscientious government of Ghana half-interested in preservation of objective history of the State of Ghana would have requested those records a long time ago, and shared them with Ghanaians, in appropriate places, a museum in Ghana, for example.

Or, when they met President Macron, as President Akufo-Addo did, recently.

Or, even right now, before today is over.
We say this because we believe that, today, it is simply not enough for Africans to merely ask for the return of looted arts and objects.

But, we will not hold our breath on that one, particularly with respect to the Akufo-Addo government, now that they are on a self-directed, publicly-funded, Institutions Re-naming Convention (IRC).

All that said, this paper of actually about the strategic genius and prowess of Dr. Kwame Nkrumah in relation to the development, education, and industrialization visions he nurtured for Ghana that still remain the pillar of Ghana’s economy and political-social life, and more. There is no denying that fact, today, that even as many politicians and corrupt military and police officials have spent more than half their lifetimes destroying the Kwame Nkrumah legacy, innocent and fair-minded politicians and non-politicians were, and have been made the poorer for those diabolical actions.

Clearly, knowledge and situational awareness must improve for all of us unswayed by propaganda and contrived stories propagated by the military-and-police dictators, and “rascal” Kofi Abrefa Busia, in 1966, before, and after.

This is another one of our contributions on this day, 400 years after that landing at old “Point-Comfort”, in ironic fashion.

Case in point (1).
Writing about “Ghana Oil Regulation – Getting the Deal Through”, Kimathi & Partners (2019) reported:

“…In January 2015, Ghana took a major step towards the realisation of energy and power security with the signing of an agreement for the development of the Offshore Cape Three Points integrated oil and gas project, estimated to cost about US$7 billion, which is being undertaken by ENI Spa in collaboration with Vitol Energy. The project is expected to develop the Sankofa and Gye Nyame fields to provide sufficient gas to operate the thermal power plants for 20 years. Oil and gas production from the field are expected to commence in 2017 and 2018 respectively. As at June 2016, the field was estimated to hold oil reserves of 204 million barrels and gas reserves of 1,107 billion cubic feet…” (2019).

Respectfully, while that was good information for Ghanaians to have, it would have been very useful also if that information had been delivered with the proper historical context, as background. The fact of the matter is, 2015 was not actually the first time ENI had a contract to deliver services and produce goods for the mutual benefit of Ghana, ENI, and the People of Italy.

How about:
“….In January 2015, Ghana took yet another major step towards the realisation of energy and power security with the signing of an agreement for the development of the Offshore Cape Three Points integrated oil and gas project estimated to cost about US$7 billion, which is being undertaken by ENI Spa….”?

Case in point (2).
This one, from ENI SpA, of all entities.
READ: “…. Eni has been present in Ghana since 2009 and currently is the operator of the Offshore Cape Three Points…. (Eni’s interest 47.22%) and Offshore Keta… In July 2012, Eni and its partners in the OCPT license, signed a Memorandum of Understanding with the Ministry of Energy of Ghana for the development and marketing of discovered gas resources…” (2012).

That statement appears on a United States Securities And Exchange Commission, (SEC), Form 20-F, “…ANNUAL REPORT PURSUANT TO SECTION 13 OR 15(d) OF THE SECURITIES EXCHANGE ACT OF 1934 For the fiscal year ended December 31, 2012”, a document filed with the SEC by ENI SpA, in 2012.

The records of history tell us that same company, ENI, was in Ghana a lot earlier, actually way back in 1963, in Kwame Nkrumah’s Ghana. And, while it does not look like that is a material fact or statement, or omission, it is still one the SEC would probably want to look into as part of the normal administrative/regulatory oversight of companies with interests in the United States, which ENI apparently does because they filed the SEC Form 20-F. We would, if were at the SEC, unless ENI did disclose that history in previous filing(s).

ITEM: Before that, before “Offshore Cape Three Points”, ENI was actually in Ghana working the Ghana-Italian Partnership (GHAIP), between Ghana, ENI, and Enrico Mattei’s Italy.

In the eyes and minds of Africans and fair-minded citizens of the world, Dr. Kwame Nkrumah will always be exceptional, without equal, for these important reasons:

(1) Vision
(2) Hard Work
(3) Self-Sacrifice
(4) Dedication to Duty
(5) Leadership
(6) Results
Those are the human qualities Dr. Kwame Nkrumah brought to the development of Ghana for the benefit of all the People.

Those are the basic, essential, elements by which to judge every other Ghanaian leader, in our humble opinion.

So, therefore, we bring to all objective and fair-minded Ghanaians who have an iota of interest in what Osagyefo Dr. Kwame Nkrumah said and when he commissioned the Tema Oil Refinery (TOR/GHAIP) in the presence of Prof. Marcello Boldrini, CEO, ENI SpA/Italy, at Tema, 56 years ago, on 28 September, 1963.

Please read on, and pass on what Osagyefo Dr. Kwame Nkrumah said about industry in Ghana and the Ghana-Italian Partnership (GHAIP) in the case of the Tema Oil Refinery five-and-half decades ago, today:

“…Oil is the lifeblood of industry…as important for industry as water is for human existence. The politics of it is even more complicating. Without oil, the wheels of industry refuse to turn. That is why the Government has decided to buttress its programme of industrialisation by the establishment of an oil refinery…GHIAIP …”is an interstate enterprise of a special kind... The lamentable and untimely death of Signor Enrico Mattei in an air crash …last October, robbed Italy of one of its great captains of State Industry. It was he who formed the state-owned oil industry, E.N.I. out of which…gave birth to…(GHAIP)…here in Ghana…GHAIP… have undertaken, commencing with the production date, to pay into a Special Sinking Fund such sums as will produce…an amount equal to one-half of the cost of the Refinery…to the Government of Ghana.… I am sure that what we see here today is only the beginning of an important upsurge in our industrial programme. May this Refinery justify the confidence and the faith which our people have placed in us and in its success…”, (Dr. Kwame Nkrumah, Opening of GHAIP, now known as Tema Oil Refinery (TOR), 28 Sep 1963)).

Please read more, and pass on.
In fact, you may also be interested in some information about the man Dr. Kwame Nkrumah recognized, Signor Enrico Mattei, founder of E.N.I./Italy, when Nkrumah commissioned the TOR that today, bills itself as “the premier and stellar refinery in Africa…established in 1963 to enhance the country’s (Ghana) economic, investment and development programs”.