A Good Example of Public-Private Partnership and Matters Arising.
By Kenneth A. Donkor-Hyiaman 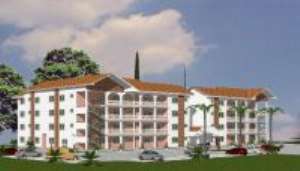 The Government of Ghana announced plans to implement some interventions in the housing and housing finance markets in its 2019 budget last year. A GH¢1 billion mortgage fund was to be established to leverage private capital to provide affordable houses for the populace. The fund aims to expand access to housing and deepen the local mortgage and construction finance market to help bring down the housing deficit, which is estimated at 1.7 million units.

A few months after, it appears the government's affordable housing and national mortgage scheme is starting to generate some good results. Here we have, perhaps, for the first time, 1 and 2-bedroom houses going for as low as GHS140,000 (US$25,000) and cedi-denominated mortgages priced as low as 12% per annum. This is perhaps the closest to the definition of affordable housing in the history of Ghana! The last time I checked the housing market, Blue Rose was the only developer among hundreds of developers supplying houses at that 'affordable' price point. This is a clear example of how the government could work with private interests to reduce the housing and housing finance challenges of the average Ghanaian - Public Private Partnership.

Government by its nature could obtain cheap funds than private organisations because of the relatively low risk associated with the former. The Government's intervention by way of this housing scheme and the 'off-taking' of the specified housing supplies by the selected developers has effectively removed the risk, uncertainty and the long holding period developers face in selling their supplies. In effect, this intervention has in part reduced the high interest cost on development finance faced by developers during the construction phase and the marketing phase which traditionally follows. Kudos to the Government!

While we congratulate the government for this housing and housing finance initiatives, two policy clarifications are needed. First, the description "public servant" should not be a basis for receiving a government subsidy since it may be an unfair discrimination against citizens working in the private sector. This is valid especially when government cannot employ everyone and the resource may be inefficiently allocated to public servants who do not need it. For example, the CEO of Cocobod, whose monthly salary is over GHS70,000 cannot be considered as needing government support purchase a house. This applies to many heads of public institutions and other public servants. There are also many other public servants who are already homeowners. Knowing the importance of homeownership to the prosperity of households and individuals, others should, therefore, be given the opportunity to be homeowners too. Else, the scheme could engender some unintended consequences like deepening the already scary inequality gap between those who have and those who don't! There is, therefore, a need for a clear policy guideline that positively discriminates among public servants in this regard.

Second, it will be interesting to know how the "interest rate subsidy" on the mortgages is going to be managed. The subsidy is the difference between what these public servants would obtain in the free market (approximately 30% per annum for cedi-denominated mortgages) and what is on offer by the selected banks (12% per annum). That is about 18% per annum!

This subsidy entitles the state to an equity position in these houses. In other words, the state is in theory a part-owner ('joint-owner') with the public servants who are going to buy these houses unless designed as debt to be repaid by the latter over time. However, historically, subsidies of this kind associated with government housing schemes in Ghana have been given to buyers as FREE LUNCH and often times as REWARDS to political party cronies, without government recognising such interventions as equity or debt investment to be recouped in some form later. Such an approach is an inappropriate and unsustainable way of administering subsidies.

The welfare function of the state is to ensure that citizens have adequate and decent shelter and not to give out free houses to citizens (especially those who could afford) and when the resources are not enough for all. Recognising that public resources are limited, the approach in the management of housing and housing finance subsidies in other countries (i.e Singapore, UK, etc) is that the government designs these subsidies as investments, which the beneficiaries have to pay back should they sell those subsidized houses (often at their market values) because they may no longer be in need of the subsidy due to their improved economic status. This enables the government to recycle the subsidy back into the fund and reallocate them to other people who need it.

The benefit of recycling subsidies is two-prompt; first, it removes the free lunch especially for those whose economic status improves over time, and second, it improves the sustainability of the subsidy funding mechanism. The government would not have to cough up huge sums of money to be disbursed as new subsidies.

It is my hope that this policy dimensions in relation to qualification for house and mortgage and the management of the subsidy will be given some deeper thought by the Minister and his team of experts.

Author: Dr Kenneth A. Donkor-Hyiaman is a Real Estate and Urban Economist and a Lecturer in Real Estate Finance and Real Estate Development at the Department of Land Economy, Kwame Nkrumah University of Science and Technology, Kumasi.