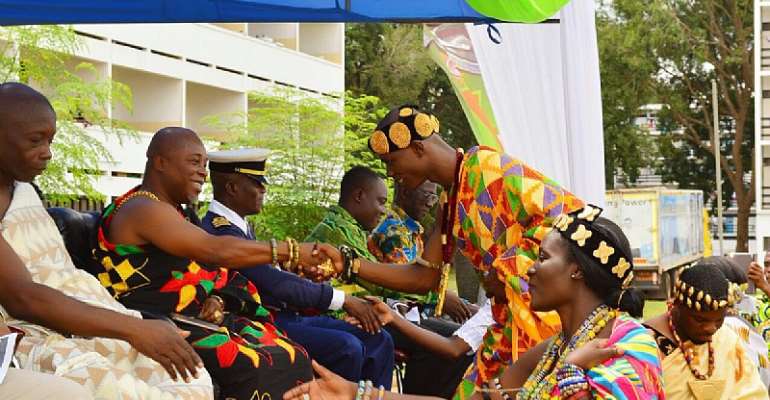 Chieftaincy and modern governance have symbiotic relationships; hence, they supplement each other for smooth nation building. The interaction between traditional and formal governmental institutions results in efficient governance since both parties learn from each other; while the traditional authorities learn more about democracy, rule of law, human rights and civil liberties, government officials learn about people and their customs (Adu-Afful, 2010). According to Kendie and Guri (2004), traditional authorities form the leadership structures within the community, and their functional role is to ensure compliance with rules, norms, beliefs, customs and practices on the part of the subjects.

Emphatically, even though the traditional system of governance was the backbone and mantra of Ghana’s political structure, however, democracy has now overshadowed its image. It’s worth mentioning that while modern system of governance is an achieved status, chieftaincy is ascribed. This does not ring well in the ears of many democratic advocates, because it does not toe the line of consensus model of power in society; but rather sidelines the full participation of the subjects during appointment of chiefs or leaders. Under this system, only people who are directly connected to the throne are given the chance to rule; unlike democratic governance.

In contrast, democracy is the best basis for social organization because, its logic denies the absolute truth that can be known with certainty, and therefore allows for diversity, tolerance, openness to change and recognition of error. It maximizes the opportunities for self-determination, for persons to live under laws of their own choosing. Consequently, the democratic process promotes human development (the growth of personal responsibility and intelligence) while also providing the best means for people to protect and advance their shared interest (Diamond, 1999).

Tenets of modern governance (Ejike, 2016).
1. Governance (of any polity, organization, other political and social milieus) should at all times, be of the people, by the people and of the people.

2. The freedom of generality of the people (of any polity or society) should always be guaranteed in the running of the affairs of their political, economic and social environment.

4. Opinions of the generality of people should at all times be respected, especially on matters of public importance. Therefore, freedom of expression should be guaranteed in the operation of contemporary governments (politics).

6. Governments should at all times respect the key fact that “power belongs to the people”.

7. Complacency (apathy) on the part of the people does not augur well for a true emplacement of democracy, and therefore, leaders must encourage the generality of the people to participate in the governance and administration of their milieus.

8. All eligible voters must be allowed to vote their representatives and leaders in all elections that leads to their governance; and their votes must be made to count.

9. Fair and equal treatment of everyone no matter his or her gender, race or intelligence.

10. Truth and justice must remain the all time creed of any democracy, and must be seen and felt to be practiced at all times and also entrenched for all times. Indeed, truth and justice, equality and freedom, must always be seen to have been been upheld without fear or favour.

The Chieftaincy Act, 2008 (Act No. 759) of Ghana makes explicit provision for local government in Ghana and the promotion, conservation and development of all customary laws. Evidently, a Chief may act as an arbitrator in disputes regarding customary law where parties agree to arbitration.

Since time immemorial, traditional leaders have championed the leadership course and living imperatives of Ghanaians. Some played altruistic roles; ranging from their resources to their own lives. Realistically, each time a redefinition of a philosophy emerges, the mindset and perspectives of people equally change. This clash has dismantled the partnership between traditional leaders and their subjects – and has however, erected a wall of subscription for democratic governance.

Recommended Strategies
Even though, contemporarily, democracy and its tenets have taken charge of the hearts and minds of Ghanaians, the traditional principles of governance must not in any way be taken for granted in the leadership journey of Ghana.

Discrepancies and conflicts between the two systems of governance must be effectively resolved to pave way for smooth decision-making at all levels. This will go a long way to parachute communication patterns at national and local levels.

Conscientiously, most Ghanaians are of the view that traditional leaders are distinct from democratic leaders. Factually, emergence of divergent philosophical ideologies and thinking capacities are mostly the predictable outcomes.

Again, flexibility must be distributed throughout the various sectors of the economy to ensure equal representation of the two system of governance in the affairs of the nation. The 1992 Constitution must be reviewed to make effective integration of traditional leadership into the mainstream system of governance to ensure respect and full participation of underrepresented population groups.

Furthermore, traditional leaders must work fervently to build an indestructible social capital with their respective communities – and make a collaborative effort to birth sustainable and developmental projects to raise the living standards of their members to an appreciable tangent point. This grassroot initiative will win the interests and commitments of mainstream leaders to join hands in the course.

Nations best thrive in an environment where decent and effective collaborations are built between traditional leadership and modern system of governance.