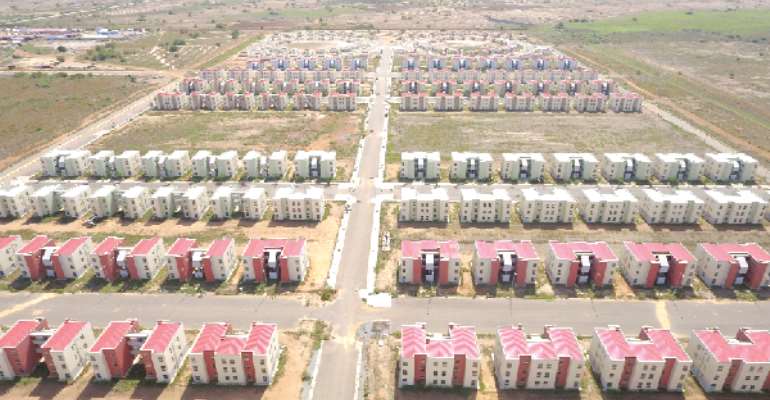 A thorough survey by my team and l conducted indicates 7/10 Ghanaian University graduates can't afford the rent of a single room in the country currently,whereas the affordable housing projects initiated by former president John Agyekum Kufuor consisting over 4,700 housing units across the nation aimed at reducing the country's 1.7 million housing deficit all left uncompleted, checking from the five(5) different Regions which saw such project on it's soil; namely the Ashanti,Northern,Eastern,Greater Accra and the Upper West Regions.

The Nana Addo - led government considering the affordable housing project, earlier this year entered an agreement with the United Nations Office for Project Services (UNOPS) for the construction of at least 100,000 affordable homes across the country worth US$436m, with work yet to be seen.

The Appolonia Affordable Housing Project
Is a 2,325-acre project expected to construct about 2,000 affordable homes to accommodate up to around 88,000 people with the initiative coming into limelight back in 2012, launched in Accra to offers residential facilities to both the lower and middle-class people in the country, which outcome remains unproductive.

A 300-acre housing project, where construction of around 1,502 houses at the initial phase are expected started under the leadership of former Prez, John Dramani Mahama back in 2013 but has for now become a white elephant at the site in the Ningo-Prampram district (Greater Accra). Construtora OAS Ghana Limited, a Brazilian construction to whom such contract was awarded company even come out with the promise to expand the project to further build around 11,000 houses in total.

A project which started back in 2006, was abandoned in 2014 due to what some term to as luck of funds and change of government. The project was then forwarded to Social Security and National Insurance Trust (SSNIT), who also failed to complete the process within the time period having estimated a cost of GHC195 million for the Borteyman affordable housing project. This affordable housing scheme in Ghana has recently been awarded back to SSNIT to complete from where the project was stalled.

Which took off under the Kuffuor - led administration in Kumasi was similarly stalled,only to be resumed recently. As thorough investigation affirms the Asokore Mampong and Borteyman projects are both been handled by the SSNIT, with a total house of 2,543 are expected to be built across these two Regions(Greater Accra & Ashanti Region).

These aforementioned projects alone when concentrated and properly managed can cease to generate about 15,000 jobopportunities for the people of Ghana.

Backgrounder
The affordable housing project which started under the John Agyekum Kufuor-led NPP administration which aimed at reducing Ghana’s 1.7 million housing deficit according to former Deputy Minister of Works and Housing now Deputy Minister of Gender, Children and Social Protection, Hon. Mad Freda Prempeh are no more affordable houses, as a GHS25,000 price tag has now ballooned to GHS220,000 for a two bedroom unit at the Borteyman Affordable House by the previous government.

More Article
Modern Ghana Links
Why community participation in schooling is struggling in Nigeria: a view from the ground
How COVID-19 restrictions prevent Nairobi's sex workers from accessing vital healthcare
COVID-19 policy briefs must be realistic: a review by young southern African scientists
Why Somali clan elders could hold the key to opening dialogue with Al-Shabaab
Questions abound for Ghana’s democracy after tensioned election cycle
In Ghana, Bribe Givers Are Not Corrupt -The Noguchi Covid Positive-Negative Saga
Why Most Sales Tactics Don’t Work; Do This Instead
Food and healthcare in war-torn Tigray: preliminary insights on what's at stake
Discovery of two new giant radio galaxies offers fresh insights into the universe
Election Reports Quotes Dossiers
TOP STORIES