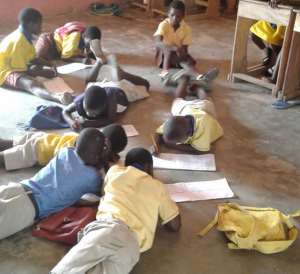 INTRODUCTION
After independence, Ghana had the opportunity to showcase to the world its preparedness to manage its own affairs through home grown human resources. This has been evident in the past with the maintenance/creation of the Civil and Public Services and subsequent reliance of Ghanaian Civil and Public servants to man these institutions. The evidences of our own capacity to man our sectors has been a product of our educational system; bearing such fruits as other countries within the African region coming into Ghana to study. This enviable position of Ghana has witnessed praises and kept it as benchmark for education within the West African sub-region for a long time. This stance seem however to have seen a negative downturn in recent times with Ghana being ranked by different research institutions unfavorably. In their work Educational Reforms in Ghana: Past and Present, Samuel Adu-Gyamfi1, Wilhemina Joselyn Donkoh & Anim Adinkrah Addo (2016) support this notion by opining that although Ghana’s educational system had previously been regarded as one of the most highly developed and effective in West Africa, by the 1980s it was in near collapse and viewed as dysfunctional in relation to the goals and aspirations of the country. This observation by Adu-Gyamfi etal (2016) is enough pointer that, our educational system has since gotten some factors wrong and need redress. They further assert that Since March 6, 1957 when Ghana attained independence from British colonial rule, education has been a major priority on the agenda of successive governments. It has also been subjected to series of changes, constantly in search of the model which would fit the needs of the country and the expectations of the citizens. Their observation gives enough credence to reason that, the current failures of Ghana’s educational system cannot be attributed to a single government. Successive governments have made attempts to reform the sector with some successes being achieved amidst a myriad of failures.

There current media outflow of information on Ghana’s low ranking by the World Bank has witnessed grave disappointment by persons in the educational sector and those out of the sector. Many seem to have been disappointed with the ranking which placed Ghana second, only to Niger in a ranking involving 150 countries globally. The Human Capital index according to the report looked at the performance of basic and secondary schools candidates in harmonized tests scores globally. The report stressed that although Ghana had done well in terms of enrolment for basic and second cycle education, there was no corresponding improvement in the quality of education offered. The report blamed the low ranking of Ghana on the poor quality of learning in schools in the country. For instance, the report indicated that although the expected years of school for children in Ghana was 11.6 as compared to 8.6 average for sub-Saharan African countries, 5.7 of those years were lost because of poor content in Ghanaian schools. While Ghanaians are bothered over this current report, it is to be remembered that, the trend is not new in recent years. In 2018, for instance, a survey of 20 countries in the area of education did not showcase Ghana, (refer) Ghana Is Not Found in the Top 20 2018. This report in 2018 was a testament that, we had lost our earlier bragging rights in the area of education to new entrants’, especially Asian countries. Again in 2015 when the Organization for Economic Cooperation and Development ranked 97 countries in the area of education, Ghana again was ranked last amongst the 97 (refer) Ghana Ranked Last in Global School Ranking. These instances call for investigations to the causal factors gradually undermining the country’s’ educational system.

In the recent past, successive governments of Ghana have embarked on reforms that have emphasized increased enrolments especially at the secondary school level. These policy drives usually seem not to have gone through rigorous research but rather products of that which will attract the attention of the voter. In the erstwhile National Democratic Congress regime, it was almost unreasonable to outline the achievements of the government without first listing the numerous Senior High Schools the regime had built in different parts of the country. The heights of this was the Day Schools policy which created room for many to go to schools within their environs to absorb the excesses of students who are unable to enroll in the boarding houses. This trend did not see a major departure when the incumbent New Patriotic Party took over the realms of governance introducing as one of their major policies, the Free Senior High Schools. Both parties created room for mass enrolments of students without corresponding enabling environments to ensure quality.

The departure from quality in the above initiatives is the lack of or inadequate corresponding systems to ensure student are equipped with the skills, knowledge and attitudes needed to enhance knowledge acquisition. In the first instance, making room for mass enrolment requires the requisite space to accommodate the students. When class rooms are limited or admissions are greater than classroom spaces, the obvious outcomes will be poorly trained students as a result of mismatch in the student - teacher ratio and overcrowded classrooms. Here, the report by the Ghana National Education Campaign Coalition (GNECC) as captured in the July 23, 2018 edition of the Daily Graphic is instructive –“Dormitories and classrooms continue to be overcrowded, with some students sleeping on the floor in dormitories, while some female students, who could not find accommodation on school compounds and had to put up in rented places, got raped”

Further, training has never been effective in the history of any community without the motivation of the trainers. Over the years, Ghana’s education systems at both the basic and secondary levels have not fully relied on the express knowledge of professionals. In a number of instances, reliance is made of unprofessional teachers termed pupil teacher especially in the rural area( their efforts are to be applauded though) . It is to be observed that, teaching is a skill that require teachers to go through training to perfect the act. When an untrained teacher is given the mandate of a trained teacher, the outcome is likely to be the churning out of compromised students.

One other possible causative factor of the low ranking in recent times is lack of motivation for the teachers. Media reports has over time picked strikes and other related industrial actions by teachers seeking redress for unattended grievances by government. The Coalition of Concerned Teachers for instance in 2018 declared an indefinite on Thursday, Nov 1, over what they said was the failure of the government to pay their salary arrears. These strikes undermine studies and the quality of education, especially so when teachers leave the classroom for a long time demanding government actions on their conditions of service.

The World Bank reports that Ghana’s current HCI is 44 per cent, which implies that the country’s next generation of workers will lose 56 per cent of their productive ability and quality. Other implications are;

Further, there will be high tendencies of academic dishonest practices such as cheating in examinations and falsification of entry requirement into the tertiary system since most of these students may want to get what they require by foul means

Implications for the Labour Market
Ghana’s labout market relies heavily on home grown human resources. With the upsurge of reports of negative ranking in our educational system, employer confidence on the Ghanaian labour force is likely to dwindle, whiles consumer confidence will also be affected since to one will want to be served by a poorly trained Doctor, Lawyer, accountant et as a result of compromised standards at the basic and secondary levels.

Implications for the Country
Times back, Ghana was the preferred destination for many in the area of education. The current worrying trends which reflects in the rankings has the tendency of affecting the inflow of other nationals into the country to study. Also, other countries trusted the Ghana’s educational system in the past leading to Ghanaians being the preferred source of labour force. With the current trends of low educational rankings, tendencies are that, the quest for Ghanaian labour in the international market will dwindle over time.

HOW TO MAKE GHANAS EDUCATION COMPETITIVE
Amidst stakeholder concerns, the Word Bank has recommended the provision of good teaching and learning materials and adopting innovative teaching methodologies to salvage the situation. On the heels of the recommendations of the World Bank, it is further recommended that;

Increased enrolment should be backed with increased classroom infrastructure. In instances where government makes conscious efforts to increase enrolment without corresponding increase in classroom infrastructure, there are tendencies educational quality will be compromised. This position is not too much a departure from the opinion of the Ghana National Education Campaign Coalition (GNECC) in their 2018 Report.

Student - teacher ratio should be a key factor in determining teaching quality. It is not enough to have big class rooms and expect lesson delivery to be effective. To be effective, there should be a sizeable number of students assigned a given lecturer. The instance where one teacher has so many students under his/ her care undermines educational quality and this is one other factor necessary to ensure the quality of Ghana’s education.

Massive teacher training should be considered. It is not hidden knowledge that Ghana’s educational system at both senior secondary and basic levels still make use of pupil teachers. Much as their efforts are appreciated in nation building, it is important for government to make efforts at ensuring that persons are fit for jobs in the educational sector. This can be done by training and absorbing teachers in the educational sector after training. A key motivating factor to this is to ensure teacher trainees are paid their allowances as it pertained in the past and in timely manners to ensure commitment, motivation and quality delivery. It appears to me this trend had achieved a lot for our educational sector in the past and of course, it will not be a bad thing to revert to the winning strategy.

Conclusion
A country’s development is hinged on the quality of human resource it produces. Largely the quality of the human resource of any country is also dependent on the quality of education offered in that country. It is to be noted that, without a good foundation at the basic and secondary levels, no country can get its tertiary education right and thus a huge compromise on the caliber of human resource that will man the country’s industries. It is against this background that, Ghana as a country will need to get its acts well in understanding contemporary measures that make a country’s education quality and as such implementing such to make Ghana a good benchmark for Africa and other countries. New reforms are needed.

Let’s avoid violence, anything that will tarnish image of NP...
17 minutes ago