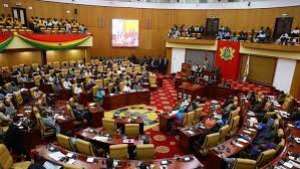 Parliament is not happy with the trolling and negative tags on the Nigerians in the country saying, its a recipe for disaster.

In a press conference organized by the Foreign Affairs Committee of Parliament appealed to the entire populace particularly the youth and the media to be cautious with their pronouncements.

This follows a statement issued by the Nigeria High Commissioner to Ghana, Ambassador Micheal Olufemi Abikoye expressing his displeasure over the bad tags on Nigerian citizens in the country.

Samuel Okudzeto Ablakwah, Minority spokesperson on Foreign Affairs and a Member of the Committee indicated that Ghana and Nigeria have had a period of turbulence recounting historical events such as the 1969 removal of Nigerians and other foreigners from Ghana and the 1983 removal of about one-million Ghanaians from to Ghana which created a diplomatic roar.

“We want to be guided by this history and we are saying that let us speak against hasty generalizations and let us go after individuals who commit crimes rather than tagging a whole nation,’’ he stated.

Meanwhile, the Parliament Committee has asked the Nigerian High Commissioner to give him the benefit of the doubt stating that the committee at this point is not too sure whether those comments are from the commissioner.

“These tensions are not necessary he should appear before us and let’s see how we can get to the bottom of the matter,” he added.