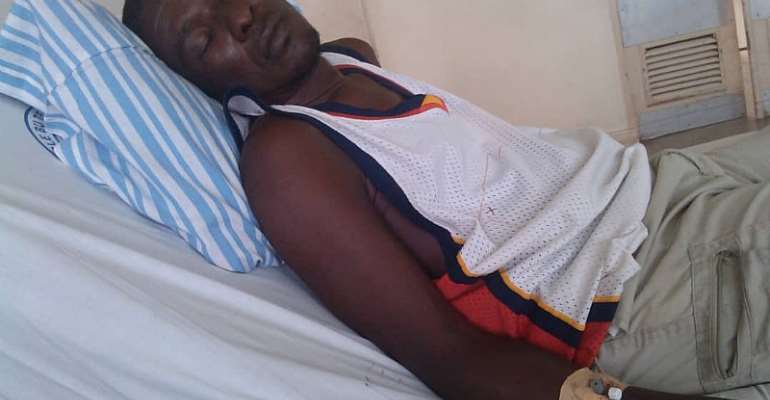 Philanthropists in the space of the world, "Insha Allah Orphanage" in Europe Italy, Ghana Tarkwa and Kamgbunli in the Western Region, have wiped the tears of a "constrictive pericarditis" patient as valiant contribution clinched a hope of survival after months of financial drought to book a pericardiectomy operation at Korle-Bu Teaching Hospital (KATH) for Alhaji Ibrahim Suleman.

The fee for the operation was pegged tat hree thousand five hundred US dollars ($3500), equivalent to one hundred and eighty thousand and twenty five cedis (18025gh) with personal terms already agreed by both parties.

Professor Martin Tamatey, a Doctor at Korle Bu Hospital in charge of Alhaji Ibrahim Suleman affairs told the family that "he has the above diagnosis which is affecting his life and making it difficult for him to have a normal life, he needs an operation called Pericardiectomy" and everybody got startled.

However, sources close to both families have confirmed that the framework of a deal is being put in place as they prepare their brother to take the said operation sooner at Korle-Bu Hospital having met the needed amount.

Alhaji Ibrahim Suleman, picked up the constrictive Pericarditis sickness on the course of plying his trade years back in Tarkwa on temporal basis, however, his positive man management style saw him wed one wife with two female children in his early parenthood.

This sickness has threatened the dogged man chances of catering for his nuclear family currently at Kamgbunli in Ellembelle District, but Ibrahim together with his impetus wife Aisha Abdul Malik, a dressmaker managed to suit up and go the full tidings up till date.

The situation would have seemed to herald Ibrahim and his wife future if not the effort made by the bigger family led by Alhaji Dauda Suleman Ackah, the Tarkwa based man, Nuhu Mustapha (Kramo) the Prestea talisman and the people of Kamgbunli community.

Nevertheless, the family of Alhaji Ibrahim Suleman the patient, are with their kind appeal to the general public for their help once again in the successful undergoing of the operation being it prayers or money.