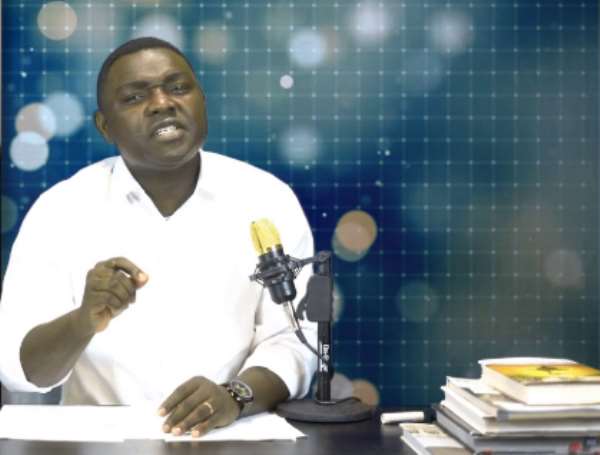 To prove the malignity of Kevin Ekow-Baidoo Taylor, the newscaster of "Friday Editorial" social media, towards His Excellency Nana Addo Dankwa Akufo-Addo and his NPP government beyond reasonable doubt, I invite the whole world to watch and listen to the underlying video coverage of what transpired at the Women Deliver Conference 2019 in Vancouver, Canada.

From all that the President said in honest, of which you have been invited to be a judge of your own, where did he denigrate women as we are being cunningly made to understand by Kevin Taylor and his NDC ilk of whom Anita De Sousou conspicuously, loquaciously emerges as primus inter pares? Have their ill-intents about the President, and their malicious aspirations to throw dust into the eyes of discerning Ghanaians in attempts to catapult NDC into power come Election 2020 not been exposed?

It is only a fool, and a person who really cringes at the sight of the truth that will claim the President's truthful assertions and observations as insults on women. I rather see his claims and advice as a way forward for encouraging women to come out with their best. He wants their positive impact to be felt on societies and people through decision making, their implementation and enforcement.

If crafty Kevin Taylor should see the President's candidly expressed views as insults to the intelligence of women, and especially to Ghanaian women, hence inviting them not to vote for his re-election in 2020, then it goes to tell who Kevin is. His objective for his nonsensical Friday Editorial broadcasts is simply to taint the NPP darker while painting the NDC white in order to secure NDC victory in Election 2020 to guarantee himself political limelight in Ghana's political arena.

If I am wrong, I challenge him to prove me so. Where did the President go wrong in all that he said as contained in the recorded video coverage of the conference? No wonder it is said in our own Akan proverb and parlance, "Akoko sa kyea mpo a, enye akroma fe".Thus, regardless of how best the fowl dances, the hawk is never enthused or pleased. This means, you can never please your archenemy no matter how best you try to. This is the character of Kevin Taylor as could be deduced from his vicious Friday Editorial recorded video postings made from which hideout, he himself and only God know.

Ghanaians understanding of politics is gradually coming of age to not be fooled by people like Kevin Taylor and Anita de Sousou, who are pursuing their parochial selfish-interests using politics as the effective tool, by way of maliciously tarnishing the reputation of their political rivals. Do you kill a fellow trader to be able to sell your wares? No!!

No sane Ghanaian will tolerate the lies told about the President by Kevin Taylor in his Friday Editorial broadcast of Friday, 7 June 2019, basing his claims on the content of the video as shown above. He was insulting and obliging the President to come out to apologise to Ghanaian women because of what he had said about women at the Conference as captured on recorded camera.

Shame on all those who by their pettiness do see evil in what the President said as a way forward to seeing most of our Ghanaian and worldwide women empowered to be able to come at par with their male compatriots.

He who administers poisonous concoction will one day end up being fatally concocted themselves – "Se wo to adu bone a ebi ka wa no". "The evil that men do lives after them". Kevin Taylor will reap the sour fruits of what he is sowing all for the stomach politics he is playing. His persistent "azaa" (fake) Friday Editorial broadcasts designed to pull down the NPP government to usher back in NDC will not wash hence inviting him to listen to the lyric song of "Moaye Late" by Kwame A Plus.

Could a commenter on my published article as per the web link below, called Kofi Addo, come back to show me where the President erred hence passing a derogatory comment about me as being unprofessional, etc.? This is because the video on the President about his views on women has gone viral, he said. The fact that the video has gone viral does not make the President guilty. It is only in the eyes of little-minds that the President's honest view could be interpreted to mean underestimating women.

Black Africans, especially Ghanaians, are not progressing as we should because we have cultivated a bitter hatred for being told the truth to the face. You easily become an enemy when you tell the truth but the truth shall I always tell, come what may. When a Whiteman tells a black man the truth, he is tagged as racist. However, it said, "If you are on the bottom rung of the ladder and you think you are on top of the ladder, you can only climb down but not further up" We can continue to tickle ourselves and laugh; stagnating and wallowing in our incompetence, corruption and all our actions and activities that dehumanise us and make us subhuman in the eyes of some people; for all "Akwasi Broni" cares!.

Read More: What a Shameless Opportunist Kevin Ekow-Baidoo Taylor of "Friday Editorial" is!