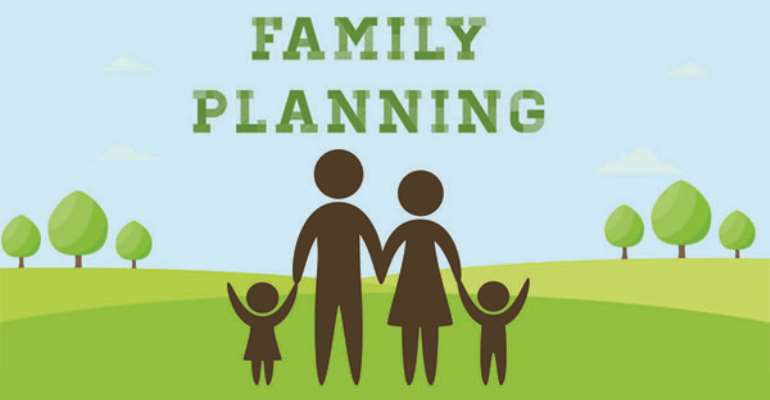 High fertility represents a critical policy issue throughout the Sub- Saharan Africa. Powerful social institutions structure often record high fertility throughout the region, raising doubts about whether or not family planning programs can have impact on rural African traditional settings.

The principal motive of the use of family planning methods is to ensure the absence of conception after sex; avoiding post-coital tristesse, often occurring as a result of the fear of unplanned/unwanted pregnancy. Family planning methods was not publicly advocated until the early 19th century and then only by private groups. In recent years, such advocacy has been advanced through global policies on family planning, national policies, as well as stakeholder involvement in family planning programs accross the world.

As a result of the concern for a better quality life amongst Ghanaians, especially those in the rural areas, it would be appropriate, that all and sundry join in a vigorous campaign to bridge the existing gap in knowledge to enhance the acceptance of family planning programs by women in their fertile age, as well as their partners.

A UN report on some key trends in family planning (2017) pointed out that, in almost all regions of the world, contraceptives are used by the majority of women in their reproductive age (15-49 years) who are married or in a union. Also, globally, in 2017, 63% of these women were using some form of contraception. Contraceptive use was above 70% in Europe and Latin America, while being below 25% in middle and Western Africa. Also, in 2017, among married or in-union women of reproductive age, the proportion of the demand for family planning and were satisfied with modern contraceptive methods was 78% globally. Accross the regions in 2017, this proportion was lowest in Africa at 56%, and above 75% in all other regions.

The existing unmet need for family planning for women in reproductive age in developing countries have been likened to several reasons like limited choice of methods, gender based barriers, users and providers bias, etc, which can collectively be dealt with through advocacy.

In 1992, the United Nations released new population forecasts, the first in a decade, and the projection showed that world population might drop below 5 million about a century from now. Another encouraging sign was that, the knowledge level on contraceptives and worldwide use of contraceptives have increased sharply in recent years. About 300 million couples in the world used contraceptives in 1990.

To ensure a happy family with a smaller size, the education on family planning should be considered important by all, and people should also be encouraged to patronize the various methods to help deal with the current trends of knowledge-practice gap in developing countries, including Ghana. Certain economic, social, cultural, religious and personal characteristics also serve as influential factors to family planning enhancement. These factors that have in a way kept fertility high are common to most developing countries.

The timing of every birth, including the first and last, can improve the livelihood of survival and of good physical and emotional health for the entire family at all stages of life. The risks associated with fetal death, birth defects, infant mortality and nutritional depletion for women and children which can lead to an increased risk of infection can all be reduced through effective family planning. Family planning is the key to slowing unsustainable population growth and the resulting negative impacts on the economy, environment, and national and regional development efforts, and there is no doubt about this fact..

A collective effort to push the family planning agenda is necessary, and must be supported by all