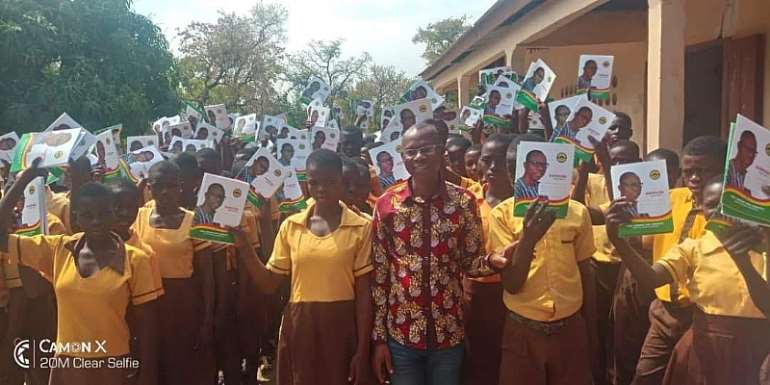 Hon Andrew Dari Chiwity, Member of Parliament (MP) for Sawla/Tuna/Kalba Constituency in the Savanna Region is two years in office as Legislator.

But within the two years of his administration, there have been numerous achievements and flaws in the area of roads, health, education and other social intervention policies.

In the area of road construction, the lawmaker said he came into the administration at a time the constituency needed critical road infrastructure especially major trunk and internal roads in the District which hitherto was in a deplorable state and serious decay.

The MP, on assumption of office, lobbied the Ministry of Roads and Highways to get the major roads most of them started under the National Democratic Congress (NDC) administration.

The Tuna -Kalba road in the constituency, he said is in a bad state hinting that he will drag the Minister for Roads and Highways to Parliament to explain the reason for the suspension of the contractor from the project site

Within weeks, the contractor was brought on site, while the District Assembly is to also embark on reshaping and reconstruction of major federal or farming roads in the constituency to ease commuters difficulties.

In the education sector, the MP said child education remained a topmost priority and as such had supported about 2000 students at the various levels of education including tertiary institutions, Senior High School and basic schools.

He has within the short period supported Basic Education Certificate Examination (BECE) candidates every year, since 2017 with examination writing materials which include mathematical sets, pens and pencils as well as free exercises book for all basic schools in the Constituency.

In addition to that, Mr Chiwitey who described education as the bedrock of developments said he has also instituted an Award Scheme for three Best graduating Students of the year for the BECE and have the vision of replicating same for the Senior High School levels.

He, however, bemoaned the level of dilapidated school structures and lack of furniture for the pupil, stating, "some of the pupils have to always sit on the bare floor, on stones and blocks."

The MP stated that, though he had supplied some bags of cement and roofing sheets for the rehabilitation of some of the dilapidated schools, his small share of the MP's Common Fund is inadequate to tackle what he described as " terrible situation" in the constituency.

Recently, he said rainstorm ripe off the Tuna Senior High School, but luck fall on them when the Assembly quickly renovate it because President Nana Akufo Addo would be visiting as part of his tour in the Savanna region.

Asked what motivated him, the young MP said, education is the only tool to be used to propel development and that, " had it not been education I wouldn't have been where I am today. I was once a deprived child like those I am trying to help today. So I always encourage children in my constituency to take their education serious, because that is the only means to transform their lives and the communities."

In the area of Health, the MP who is a member on Works and Housing Committee of Parliament said, in the past two years, declared emergency in the health sector and mapped out funds running into thousands to reconstruct some CHPS compounds and health centres, majority of which have been completed while others still under construction.

He said, to safeguard the health of Sawla/Tuna/Kalba people, he procured two Ambulance with one delivered last year and the other also recently delivered, adding that a number of delivery beds and mattresses have also been supplied to the various health facilities. St. Joseph Hospital, a Catholic Mission Hospital received a modern Technological Scanning machine in addition.

The MP stated that in order to make the health personnel work much easier, he has also provided the District Directorate of Heath with laptops computers and two motorbikes.

Clean and drinkable water supply in the constituency remained a security threat to the citizens of Sawla/Tuna/Kalba, especially during the dry season which continued to be a worrisome development to the people in recent times.

"One issue that we face most is access to potable water, especially during the dry season. Residents travel several kilometres to fetch water. Sometimes residents can live for weeks without water and have to roam to some streams even at night in search of water," he stated.

The existing wells that the residents depend on for years have all dried up, while the black Volta which has been the biggest sources of water for centuries has also been polluted by the activities of sand-mining and Fulani herdsmen.

In the interim, Mr Chiwitey said he had drilled ten boreholes for the constituency in addition to 32 boreholes he had earlier drilled during his pre-election campaigns in 2016, as a Parliamentary candidate.

The MP said, the previous NDC government had embarked on rural electrification by providing transformers and other auxiliary materials to many communities in the constituency.

He explained, before the NDC government left power in January 2017, a number of communities were planted with electricity poles waiting for wires to be fired onto the national grid, but up till date, the current government has refused or failed to complete the project.

According to him, he had asked a question to the Minister of Energy on the floor of Parliament, followed it up to the Ministry yet the government was yet to complete the project for his people to lights and to boost the local economic activities.

As part of the effort to stamp out poverty in the constituency, Hon. Chiwitey said, he has assisted a number of youth and women so they could earn a decent living, while effort been made to obtain soft loans from few financial institutions available in the area.

The population of Sawla-Tuna-Kalba District, according to the 2010 Population and Housing Census, is 99,863 representing about four percent of the entire Northern region’s total population. Males constitute 48.3 percent and females represent 51.7 percent.

Nonetheless, the MP urged the constituent to remain peaceful to each other but hopeful, as the task of pushing for development involved peace and cooperation, promising he will never let them down.