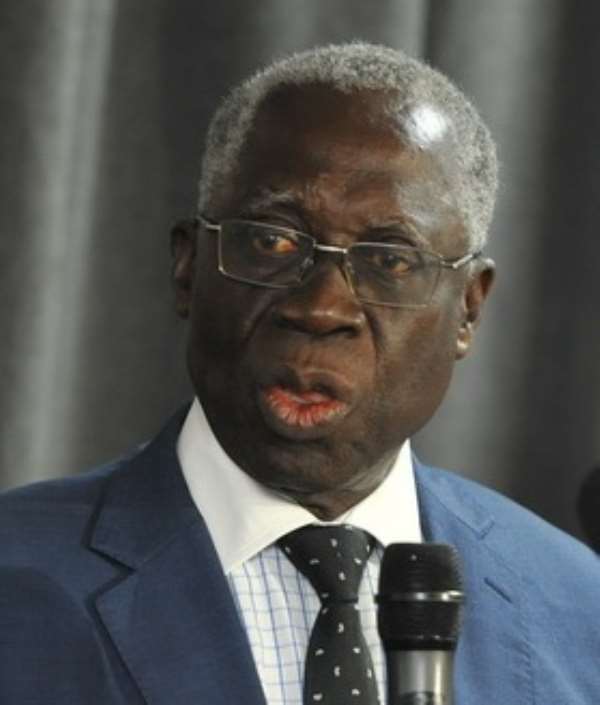 A Ghanaian USA based Mining Engineer and former NPP-California Deputy Secretary, Mr. Solomon Owusu has described response from the Senior Minister, Mr. Yaw Osafo Maafo on the recent galamsey question as disappointing and shameful. During a town hall meeting organized by the Ghana Embassy in Washington DC, USA last weekend, Solomon travelled from Colorado, about 3 and half hours flight, purposely to ask a question on the reason behind Aisha Huang’s nolle prosequi and its subsequent deportation without punishing her to serve as deterrent to other potential Chinese illegal miners invading in Ghana to degrade the environment.

In his response, the Senior Minister stated that the NPP government decided not to prosecute Aisha Huang, popularly known as galamsey queen, because prosecuting the Chinese national wouldn't end galamsey and again, wouldn’t solve Ghana’s monetary problems. Majority of the attendees couldn’t grasp the government’s decision to discharge the Chinese illegal miner, after arresting her in the act of operating illegal mining in Ghana. The answer generated some level of confusion in the hall.

“Ghana has a good relationship with China. Today, the main company that is helping to develop the infrastructure system in Ghana is Sinohydro, a Chinese company. It is the one that is going to help process our bauxite and provide about $2 billion to us. So, when there are these kinds of arrangements, there are other things behind the scenes. Putting that lady in jail in Ghana is not going to solve your money problems. It is not going to make you happy or me happy. That is not important. The most important thing is that she has been deported out of the country. There are many other things beyond what you see in these matters”, Mr. Maafo said.

In addition, the Senior Minister conceded that there are some Ghanaians behind the Chinese nationals who operate illegal mining in Ghana. “Now ask a simple question, who brought the Chinese to Ghana? Who are the Chinese working for? The Chinese themselves cannot just come, enter a particular forest and start mining. They are doing so on behalf of some Ghanaians”, Mr. Maafo admitted. These statements did not go well with a section of the audience and some began to question the government’s action toward those Ghanaian counterparts involved in the menace.

Cabinet Ministers, including Mr. Yaw Osafo Marfo, Mr. Ken Ofori-Atta and Professor Gyan Baffour attended a meeting at the World Bank in Washington DC, USA and used that opportunity to interact with Ghanaian residents in United States. The Ghana Embassy in Washington DC was packed with Ghanaians who travelled from different states within US to attend such an important town hall meeting on Sunday April 14, 2019.

As a follow up to Mr. Maafo’s response, Solomon wants to ask the cabinet and the President if they see sentencing Ghanaian galamseyers as important? Also, he wants to find out if jailing Ghanaian illegal miners would end galamsey? If not, then Mr. Owusu would like to plead to the President, H. E. Nana Akufo Addo to release all convicted Ghanaians who committed illegal mining offences. Again, Solomon wants to ask the government about the modalities put in place to enforce the mining laws without punishing illegal miners, including the foreign nationals. Furthermore, he wants the immigration and the CID to publish the names of the Ghanaians who partnered with all the arrested Chinese illegal miners, including Aisha Huang.

According to the mining professional, there is no sense in allowing the Chinese guys to smuggle Ghana’s natural resources, degrade the lands and pollute the water bodies because of $2 billion Sinohydro benefit. He admonished all Ghanaians to consider the nation first before any political affiliation. “These Chinese guys make more money in Ghana from the illegal mining operations than the said $2 billion. Referring to page 3 of the New Mining Policy drafted by the Inter-Ministerial Committee of Illegal Mining, the nation needs about $29 billion to restore lands degraded by the activities of illegal mining. Why should we allow these same Chinese guys to continuously degrade our environment because of $2 billion?”, Solomon questioned.

Mr. Owusu is subsequently calling on the government to address the citizens of the nation on a better explanation concerning the repatriation of Aisha Huang and those secrets behind the scenes that the Senior Minister couldn’t share during the town hall meeting. “If Ghanaians are thrown to jail in China for wrongdoings, why should Ghana government deport Chinese criminals without sentencing them to prison custody? If Ghana has ever signed any agreement with China that underpins Ghana’s inability prosecute Chinese criminals, unlike how China sentences Ghanaians in China, the President H. E. Nana Akufo Addo should disclose to Ghanaians. Also, the government should state which administration signed that agreement”, Solomon asked.