Clashes In Algiers On Eighth Friday Of Protests

By Claire Doyen and Amal Belalloufi 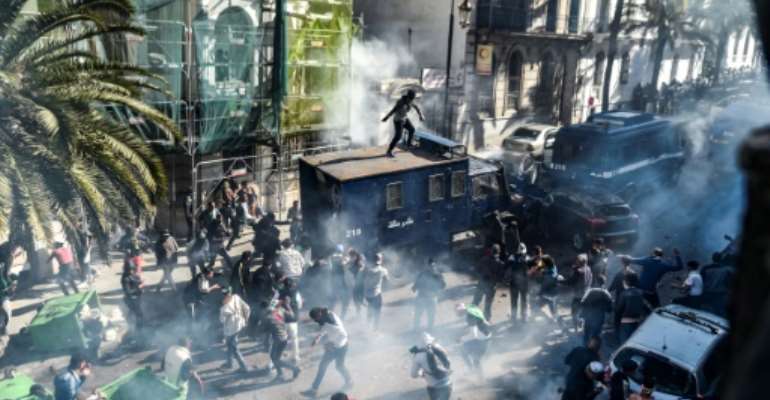 Clashes erupt between Algerian protesters and riot police during a demonstration in Algiers, the eighth Friday in a row that protestors have taken to the streets. By RYAD KRAMDI (AFP)

For the eighth Friday in a row, vast crowds marched through the Algerian capital pressing demands for Bouteflika's entourage to step down.

While the massive demonstration was largely calm, tensions were noticeably higher than at previous rallies.

Violence erupted at the end of the day when on edge of the rally several hundred youths resisted as police tried to break up the crowds outside the post office in central Algiers that has become an emblematic protest site.

It was the first time such severe clashes had taken place in Algiers since the marches began in February demanding an end to Bouteflika's 20-year rule.

Helmeted anti-riot police, dressed in black, managed to push back the protesters with tear gas and water cannon. 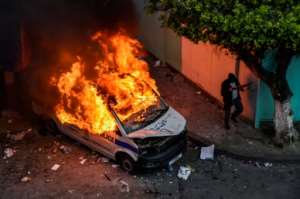 Young demonstrators responded by throwing stones and bottles, turning over large dumpsters to use as barricades.

At least one police car was set alight, while another was raided by protesters who climbed on it and smashed the windows.

Several protestors were slightly hurt, injured by stones or in the ensuing scuffles, or suffered the effects of tear gas. A security source told AFP five injured police officers had to be evacuated.

Others sort to calm the tensions, with some kneeling in the streets, raising their hands in peace.

As the crow dispersed, protestors blamed "troublemakers" for the violence, also criticising the toughening stance by police, who have reduced the area in which the demonstrations are allowed.

The crowds have rejected the holding of presidential elections on July 4, despite interim leader Abdelkader Bensalah pledging "transparent" polls. 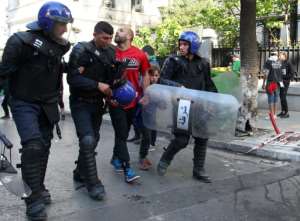 But the appointment of upper house speaker Bensalah as Algeria's first new president in 20 years has failed to meet the demands of demonstrators.

Although the 77-year-old is barred under the constitution from running in the upcoming election, protesters have pushed for the close Bouteflika ally to step down.

Students and magistrates have called for renewed rallies and marches in the capital and other cities across the North African country.

"I'm not going to vote. What for?" asked Walid.

For the first time since the anti-Bouteflika protest movement was launched in mid-February, police vehicles and forces earlier tried to block off access to the post office.

But young protesters were undeterred. 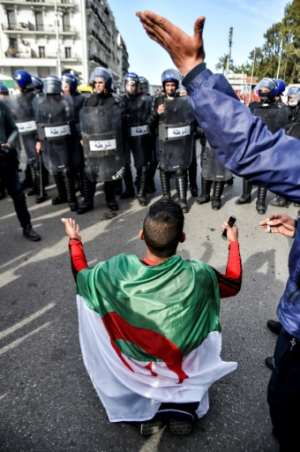 "We will be out in large numbers, very large. They don't know what's coming. They won't be able to do anything against us," said Yassine, 23.

For Mahrez Bouich, a philosophy professor at the University of Bejaia, east of Algiers, "the July 4 election has already been rejected by the people, which also rejects Bensalah's nomination".

The demonstrators argue that elections cannot be free and fair if they are held under the same judicial framework and institutions as those of the Bouteflika regime.

Bensalah has received the implicit support from the army, a key powerbrokers whose chief General Ahmed Gaid Salah withdrew his backing for Bouteflika, prompting the president's resignation on April 2.

But the general has defended keeping in place Algeria's existing institutions and warned against the "unrealistic slogans" of protesters aiming to sweep away the whole ruling system.

Prime Minister Noureddine Bedoui, who served as interior minister until Bouteflika appointed him premier on March 11, has promised an independent electoral commission.

But he too has been a target of protesters' ire.

And candidates are not rushing to take part in a system rejected by the vast majority of Algerians.

The country's long-marginalised opposition parties do not appear to be gearing up for polls either, particularly if they cannot guarantee the election will be free and fair.