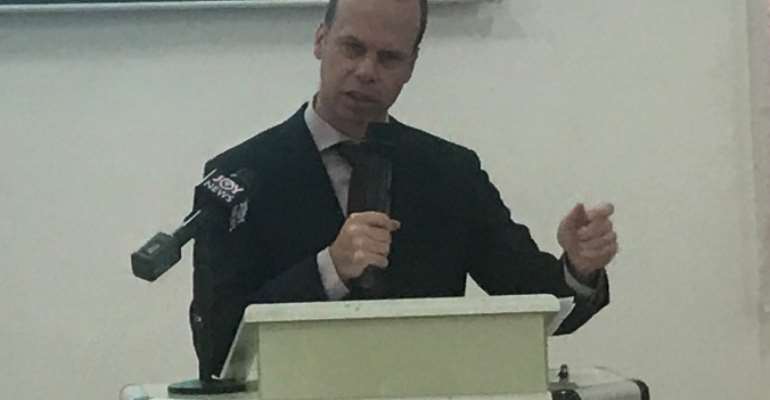 The Economic Counsellor of the United States Embassy in Accra, Hagen Maroney has called on the youth of Ghana particularly students to join the fight against the canker of corruption.

He made the call at the University of Ghana (UG) on Friday, March 22, 2019, during a roundtable discussion organized for students by Integrity Magazine.

The event, held under the theme, ‘Transparency among Millennia: A Necessity for Economic Growth,’ formed party of Integrity Magazine's corporate social responsibility.

According to Mr. Maroney, “corruption is a cancer that affects every economy, every society, and every political system in the world to some extent. It undercuts rule of law, it undermines people's confidence in their own government and it facilitates organised crime and even terrorism.”

He indicated that combating corruption on the other hand promotes stability, strengthens rule of law, advances the protection of human rights and generates speed in the financial market and helps restore confidence of citizens in their own government.

Mr Maroney added that a country's success depended on the soundness of its economic policies, which allows business to operate in environments that has transparency, consistency and predictability for businesses to make investments.

The Editor in Chief of Integrity Magazine, Reverend Kennedy Okosun, in his address stated that the magazine was focussed on promoting and nurturing new leaders and governance ethos in the public and private services in Ghana and Africa.

He later iterated that the main aim of the round table discussion was to imbibe in the youth the importance of integrity and honesty and governance.

“The youth pay an important role in the development of any country and as future leaders it is important to ensure that their transformation years from students to the world of officialdom, are imbibed with all the necessary tools that will enable them stand out and or stand up to be counted as morally upright leaders” he added.

Reverend Okosun stated that it will be heart-warming if at the end of the programme, the students can commit to being decent citizens and ensure that corruption will be battled when they hold important positions in the future.

The United Nations (UN), estimates show that the cost of corruption equals more than 5 percent of the global economy that is roughly 3.5 trillion dollars.

The World Economic Forum (WEF) estimated that corruption increases the cost of doing business up to 10 percent on the average and theInternational Monetary Fund (IMF) research has shown that investment in corrupt countries is 5 percent less than in countries that are relatively corruption free. No such thing as a corruption free country.

This means less infrastructure, fewer jobs and lower economic growth for those countries.

It is for this reason the UN has identified corruption as one of the biggest impediments against the achievements of the Sustainable Development Goals (SDG).