Protest is not a Departure from Democracy. We will Protest. 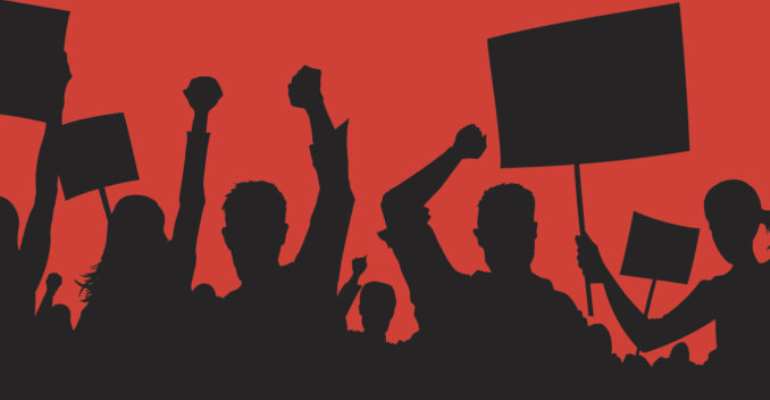 Article 17 of the Liberia's Constitution of 1986 states categorically clear; "All persons, at all times, in orderly and peaceable manner shall have the right to assemble and consult upon the common good, to instruct their representatives, to petition the government and other functionaries for the redress of grievances and to associate fully with others or may refused to associate with political parties, trade unions or organizations"

Anyone who have read this with echt comprehension will understand how ludicrous it sounds when national government feels threaten by the peaceful and orderly assembly of ordinary and harmless people who only concern is to restore sanity in public service. When the people anticipate an assembly their only quest is to inform national Government and the world about their disenchantment. Peaceful assembly doesn't in any way contravene the norms of democracy. Therefore, to view a protest action with a skeptic eye, only show how weak and trembling the regime has become, and also suggest that the regime has recognized her role in the increasing hardship the people are faced with.

Such is the case, when looting has become prevalence like human survivability on water, that it has reached to the apogee and the masses are tired for which they have united to bring an end to the stealing shindig. It's obvious that the pronouncement of a pending protest will triggered the animation of the Pro-Poor band of bandits who in their right state of mind know that the masses rise is a precipitate to their dethrone.

In the weak of mistrust and the willful scourging of the ordinary masses, especially, when all efforts exerted to quash these manhandling of public office can not yield fruit the people will be left with no option but to take to the streets and to demand a paradigm shift to the extend where public officials must be asked to resign or shrug off with the mandate of the people.

Such is why we will be very plaintive in our clamor to change the status quo.

Before this government got inaugurated it was the fundamental instruments of the Constitution that guarded the process. There were strict rules and regulations that layout inauguration proceedings and those were followed and a democratic inauguration was held. Therefore, having been a product of Democratic proceedings and after few days, due to your shady deeds, you want to thwart the very tenets on which you were given state power is utterly unfair and only unmask the contradiction from with in the regime.

Nonviolent protest has been and continues to be the only insurmountable weapon used worldwide to revise social order, eliminate and eradicate the indignation of the popular society.Upon this backdrop, for anyone to question the legitimacy of a protest one must first question the rationality with which he/she comes; whether he/she has the power to question the will of the people under a democratic rule. The statement then goes on "one who comes with equity must come with clean hands." The constitution has spoken and we are not going to

bother ourselves with any petty clearance from the regime that has no constitutional substance. Once there is a call for popular protest we will infinitely protest.

The level to which the people lives have been dragged is becoming unbearable on a daily basis, the economy is worsening by the thick of the clock, hopes have been ditched on beaches sides, dreams left on side walks and almost all aspects of our society is trekking toward the minimum decimal point and the people are beginning to consider the only option left-Protest.

Protest is never a contrasting component of democracy but rather a supplement to any free nation. The people will violate no law because they call for a popular protest and they would hold no account to anyone what so ever neither will they apologize their actions.

When those stooges of this regime was in the opposition they organized many protests, some of which that even turned violent. Despite those measures at the time they still enjoyed the vouchsafe to freedom of assembly. Therefore, to think you can keep us in the dungeon with cunning measures and through the propagation of ruthlessness from the so call Sabu Unit you are just joking and lavishing your mediocrity like a naked drug addict believing he's wearing a coat suit. When the time comes and the people can no longer condone the extend to which our impoverishment has reached we will not provocate a departure from democracy rather we will provoke article 1 and 17, after all, no one can predict what resolved men and women can do to revise social discipline.

Our Strengthened Supervisory Role Led To Closure Of 420 Bank...
18 minutes ago